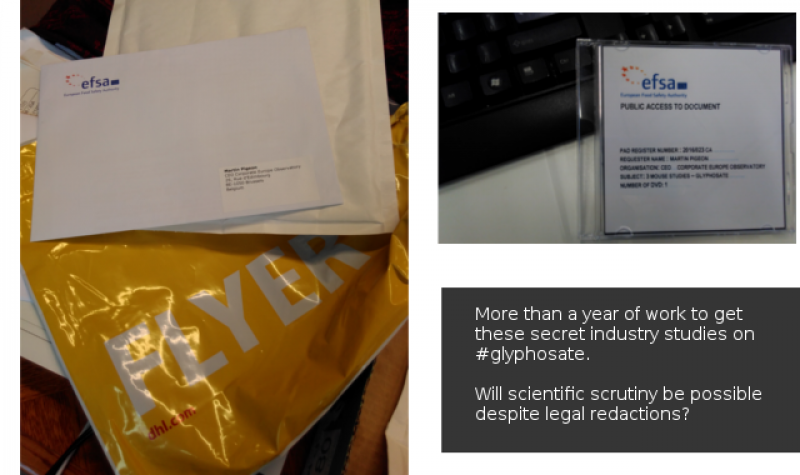 The European Food Safety Authority (EFSA) has finally sent us the raw data of three important scientific studies it used for its evaluation of glyphosate, the “Mysterious Three”. But due to legal concerns, large sections of the data have been redacted. Nevertheless, EFSA promised that “the information will be sufficient to enable a third-party scientist to scrutinise the evaluation of glyphosate that was carried out by EFSA and EU Member States”. Will this be the case?

On 10 December 2015, CEO introduced an access to documents request on three scientific studies deemed “crucial” by EFSA on its evaluation of glyphosate. For years, Corporate Europe Observatory and others have been asking EFSA and the European Commission that, just as with clinical trials for medicines, the data supporting EFSA’s scientific opinions should systematically be made public to enable scientific scrutiny. This is not the case today, because EU rules stipulate that this data should be provided by industry itself, and since companies don’t want their competitors to use these studies too they never publish them.

EFSA first refused, justifying its stance by quoting the owners of the studies, all companies producing glyphosate-based herbicides, saying disclosing this evidence would undermine their trade secrets and intellectual property rights. CEO appealed that decision. In March 2016, Green MEPs introduced another request for many more studies and, one year later, after EFSA and the European Commission realised that justifying important regulatory decisions with secret industry data was a political dead end, the agency finally agreed to release as much data as they thought they could to CEO and the Green MEPs. This is historical, at least in principle: the agency never did that publicly before. On CEO’s side, these are the studies at stake:

What EFSA’s disclosure should enable is to see whether the raw data of these studies has been correctly interpreted by these studies’ authors as well as public officials from EFSA and Member States. This would be nothing less than allowing EFSA's work to, at last, be examined by the scientific community. But will it be possible? Some challenges already show up:

- the documents reached CEO in the form of huge pdfs, 566, 1143 and 1133 pages respectively. But they are scans: it is impossible to machine-search them, or import the data in any other software. This is a serious problem: a data in this format can only be processed by manual copying or optical character recognition (OCR) softwares, and both processes tend to generate mistakes.

- numerous, important sections of the documents have been redacted by EFSA for legal reasons (see complete list of redacted sections), including even the summary and the conclusions!

- CEO could be sued if it published the raw data, so, as of today, we chose not to do so even if it would make much more sense.

So, to find out whether this disclosure by EFSA, and indirectly the EU's applicable legislation, enabled scientific scrutiny or not, CEO shared the data with scientists who had already expressed interest in receiving them. CEO is ready to share it with others, provided these persons do not have links with any organisation representing a competitor of the owners of the studies (this would put CEO at risk of a lawsuit). What will their verdict be? Does such a disclosure enable scientific scrutiny of EFSA’s work? If not, why? What could have enabled it?

This is timely: the European Commission is currently evaluating the EU framework for pesticides assessment, Regulation 1107/2009, a review which could go in all sorts of directions (while the text has imperfections, it also been strongly attacked by the pesticides industry for its hazard-based approach to carcinogens and endocrine disruptors...). Whichever way, one conclusion seems inescapable: the EU must find a way to stop relying on secret evidence for such important decisions.

Did you actually read the data or just moan about EFSA and make assertions about their integrity?
If you have actual proof they did anything wrong then give it. Don't ask for data, not read it, then moan about EFSA

I wonder if there is any follow up to this? Could you find somebody to analyse the data you gained?