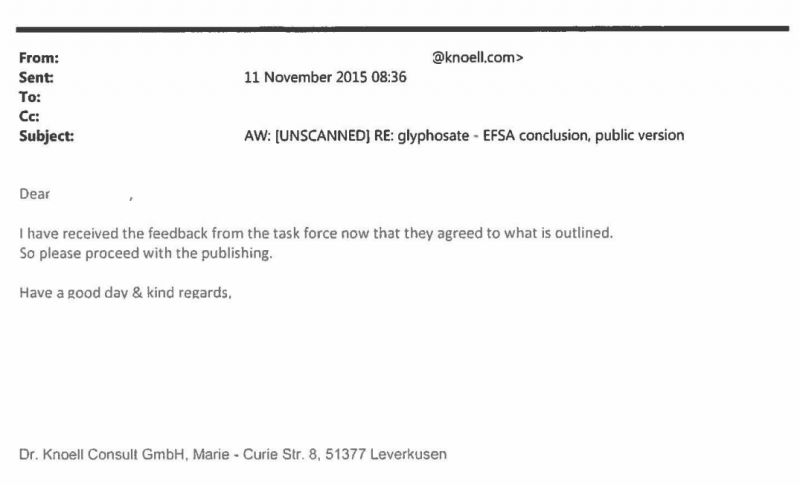 The pesticide industry had advance access to the European Food Safety Authority’s safety assessment of glyphosate, new CEO research shows. Shortly before the agency revealed its 2015 safety assessment for the world’s most widely-used herbicide, industry representatives were asked to file redaction requests and were even able to edit the documents at the very last minute. EFSA argues this is normal practice. EU member states’ pesticide experts will come together on 19 July to discuss the European Commission’s proposal for a 10-year reauthorisation of glyphosate.

[The article was corrected on 12 July 2017 at 23:40 to delete interrogations pointing at the possibility that EFSA would have breached its own rules by letting industry check its conclusions for redactions two weeks before publication: this is in fact foreseen by Regulation 844/2012 Article 13]

Email correspondence between the European Food Safety Authority (EFSA) and pesticide industry lobbyists obtained through an access to documents request shows that the agency granted industry representatives advance access to its final evaluation of glyphosate in 2015, a practice the agency describes as part of its normal process. Barely two weeks before publication, EFSA asked industry to suggest which parts of the documents should be redacted. While NGOs were denied any advance access in order to “protect the integrity of the decision-making process”, the emails also contain evidence that industry obtained changes in EFSA’s final conclusions and background documents – the exact nature of these changes remains unknown but EFSA says they are normally limited to “factual errors or typos”.

In November 2015, EFSA’s final evaluation of glyphosate concluded the substance was “unlikely” to cause cancer in humans, and raised the acceptable legal exposure levels1 by 66%. Its findings at the time were diametrically opposed to those of the World Health Organisation’s International Agency for Research Against Cancer, but well-received by industry.

On 30 October 2015, EFSA sent an email to Knoell, a German chemical industry consultancy working for the Glyphosate Task Force, which itself is a Monsanto-led industry coalition of most glyphosate-producing companies. In the message, the agency expressed its wish to “to give you [Knoell] the opportunity to remove confidential data from the EFSA conclusion and background documents”. The email included a link with a password to access EFSA’s internal server, to enable industry lobbyists to view the agency’s final conclusions and use a “redaction software tool that blackens the relevant text and fully removes the underlying information from the document.”

But it looks like industry went further than simply suggesting redactions: it also suggested, and obtained, changes to the text.

In a response sent to EFSA on 6 November 2015, a Knoell employee explained that “the applicant [the Glyphosate Task Force] found some mistakes in the EFSA conclusion”, and attached several comments, in particular regarding the sections on “Analytical Methods, E-fate and Residue” in the evaluation.

The Knoell employee went on to note that, “[a]s discussed with you this morning, the company Dow Agroscience had some doubts regarding the conclusions drawn by the authorities in their specific Vol.4”, and asked “on their behalf to check again (if possible) if the source is in-line (equivalent) with the reference specification.”

To this EFSA replied on 10 November 2015, saying that “[i]n general, comments on the EFSA conclusion are not foreseen at this stage, unless they refer to factual errors or typos”. Nevertheless, the rest of the same email shows that EFSA did in fact accept various comments by industry, highlighting for instance that “pp. 44, 46 and 53 of the conclusion: all your comments have been accepted” (some comments were refused by EFSA as well). EFSA attached its final conclusions to this email, but since the agency did not include email attachments in its response to Corporate Europe Observatory’s access to documents request, the nature of industry’s comments and what EFSA accepted remains unknown.

EFSA then asked for industry’s permission to publish its scientific opinion: “In order to prepare the conclusion for publication, we kindly ask for your agreement that there is no further confidential information in the attached version, by this evening close of business at the latest.”

A day before EFSA published its final glyphosate assessment, on 11 November 2015, the industry consultant at Knoell gave their green light, since the Glyphosate Task Force had “agreed to what is outlined”, telling EFSA it may “please proceed with the publishing.” 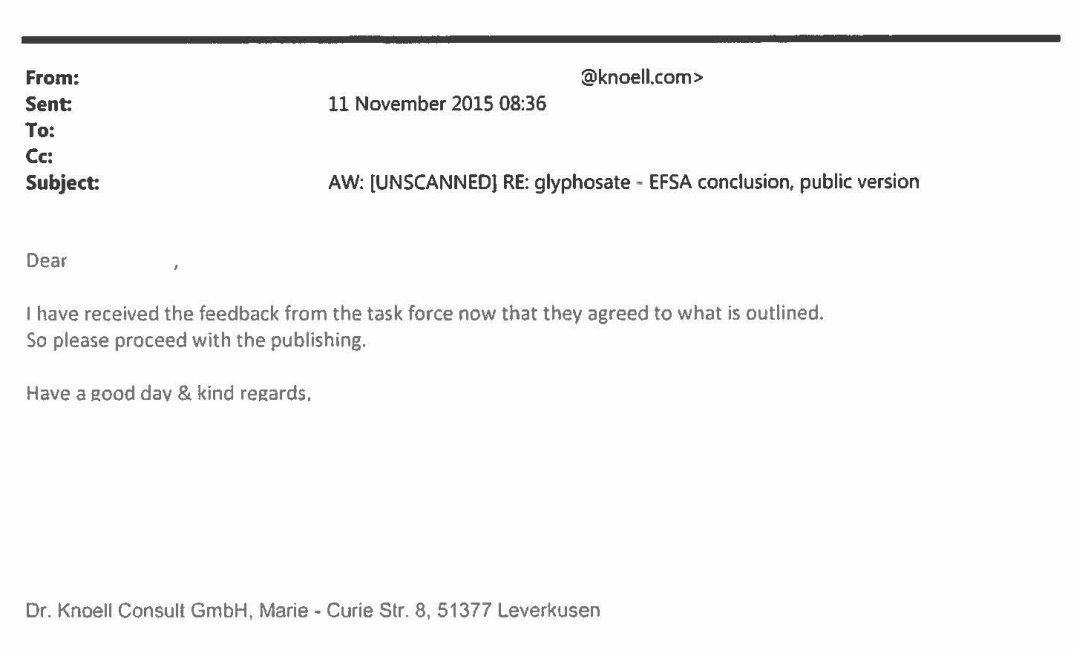 On 16 November 2015, three days ahead of EFSA’s publication of its background documents for the glyphosate assessment, the agency informed Knoell that industry’s demands for the “sanitisation” of the “Final Addendum” had “all been accepted”. EFSA also used the opportunity to seek industry’s authorisation for the publication of this first part of the supporting documentation. 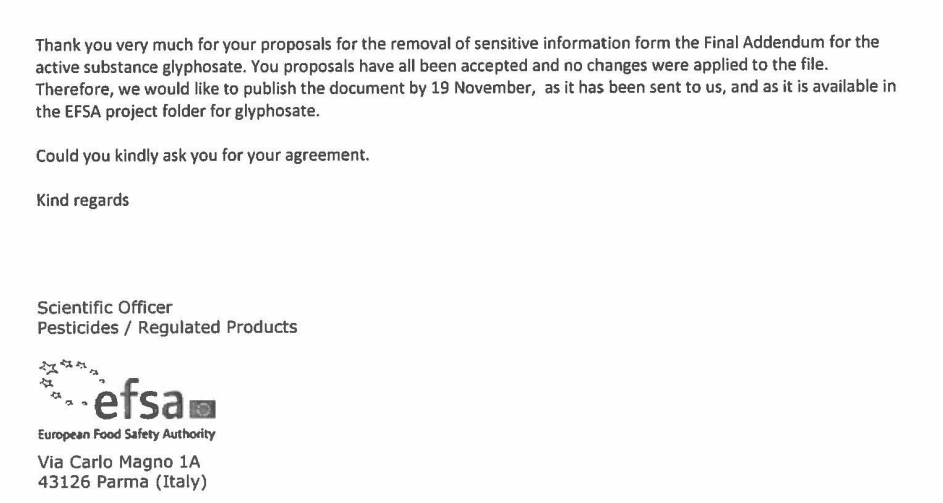 The following day, 17 November 2017, EFSA wrote a similar email to Knoell regarding the second background document, the “Peer Review Report”, congratulating them for their “excellent job” in redacting information:

“Thank you for the submission of proposals for the removal of sensitive data from the peer review report and the excellent job you and the applicants did to sanitise the files. All of your comments have been taken into consideration and all your proposal have been accepted, with the exception to the metabolite AMPA”.

“We agree to what is outlined and the documents can be published that way.”

Protecting decision-making from NGOs, but not from industry?

Industry’s privileged access to the EU evaluation of glyphosate had already been suspected when an 2015 industry-funded article by Greim et al. referred to a Risk Assessment Report written by the BfR dated January 2015 that EFSA was using as its main basis for evaluation but which EFSA refused to disclose to NGOs in August 2015 to “protect the integrity of the decision-making process”.

An email exchange between EFSA and the press office at Germany’s Federal Institute for Risk Assessment from 2 September 2015 shows that the two agencies were coordinating their communication in response to NGO complaints2 in order to jointly argue that the secrecy of the revised Risk Assessment Report was necessary because “the disclosure of these documents at this stage of the process will be premature and would seriously undermine EFSA's on-going decision-making process.” The same argument was repeated in a letter from the European Commission to German NGO Testbiotech. While it is laudable for regulators to try to protect the integrity of their work from the influence of third parties, it is self-defeating that such privileged access is given to the party with the highest interest in capturing the evaluation of regulators.

The commercial secrecy argument is commonly used to refuse access to industry-funded studies on which regulators base their assessments, but it is nonetheless highly contentious: by definition, a confidential, unpublished study cannot be evaluated by the scientific community. It took Corporate Europe Observatory and several Members of the European Parliament a whole year - and exceptional political circumstances - to obtain a partial disclosure of the confidential industry-owned studies underlying EFSA’s glyphosate evaluation. Even though this enabled an independent scientist to point out that significant results were overlooked by regulators, the usefulness of the disclosure remained limited as the data could not be used for a scientific publication without risking a lawsuit.

The emails we publish today highlight a lesser known use of the commercial confidentiality argument: it enables industry to monitor the regulators’ work throughout the drafting process, allegedly in order to to protect their commercially sensitive information. EFSA argues that its provision of early access to industry in this manner is simply the agency following the rules, as the burden to redact information is on industry, which needs to justify its requests. Apparently, “the same process is applied to the assessment of all active substances”. 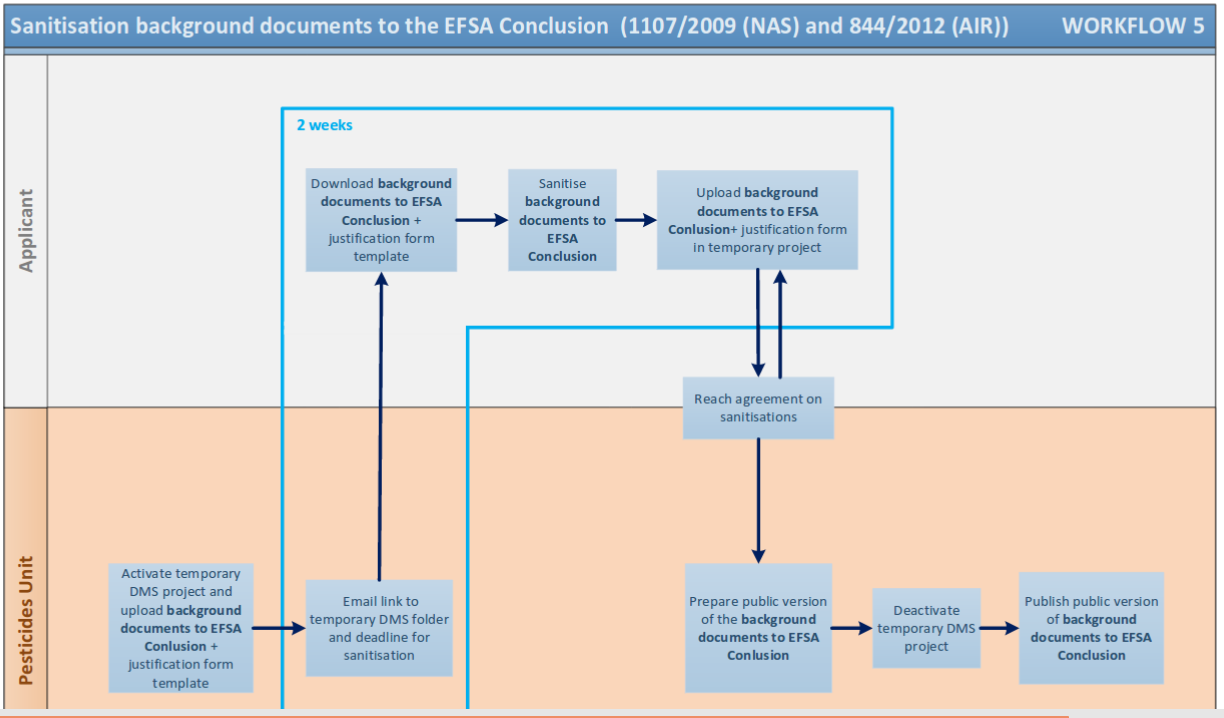 More generally, the very way the sanitisation process is organised is politically indefensible. In this case EFSA’s conclusions were presumably in line with industry’s interests since they largely echoed those of Germany’s Federal Institute for Risk Assessment, so there would not have been much for industry to complain about in this case. But what if it had been otherwise?

The current provision of advance access to EFSA evaluations gives industry two weeks to pressure regulators behind closed doors – before anything is made public. Back in 2013, Syngenta directly threatened EFSA’s Director with legal action around the publication of the agency’s scientific opinion on neonicotinoids, the publication of which validated many years’s worth of public scientific evidence that these pesticides posed a serious threat to pollinators. Giving industry early access to EFSA’s draft conclusions in that case basically set the agency up to be attacked. Surely there are other ways for public regulators to evaluate pesticides, which do not depend on unpublished, confidential industry-funded studies?

check the dismissal of the
Anonymous