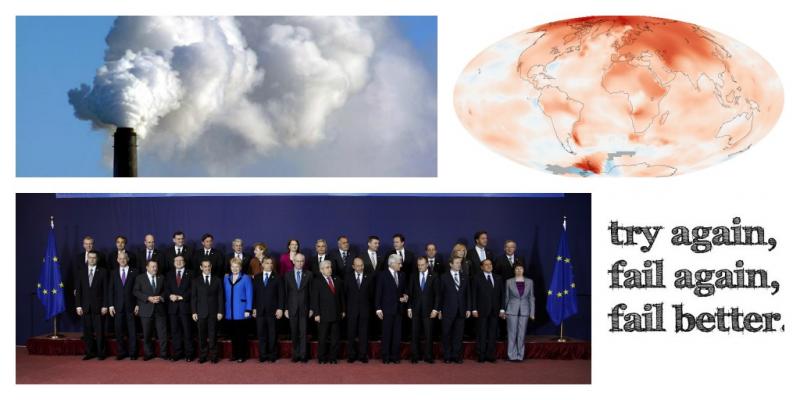 The ETS has now been running for over a decade and there remains precious little sign that it has brought about reductions in greenhouse gas emissions. On 15 July, the European Commission published a legislative proposal to revise the ETS after 2020. This is “more evolution than revolution,” according to Miguel Arias Cañete, Commissioner for Climate Action and Energy. More of the same might have been a better description.

As EU Environment Ministers met today (26 October), talk of “carbon leakage” was again at the centre of the discussion. The Commission proposal would change the rules on how free emissions allowances will be allocated, updating more regularly their distribution across different industrial sectors. But new technical formulas and reviews cannot disguise the simple fact that carbon leakage - the perceived risk that caps on EU emissions could price business out of Europe and into less regulated markets, contributing to an overall increase in greenhouse gas emissions – is not happening. The most thorough study of the issue, funded by the Commission itself, is unequivocal: “We found no evidence for any carbon leakage.”

As the debate on reforming the ETS starts once again, it is worth recalling the woeful record of emissions trading to date. Here are five reasons why the ETS should be scrapped rather than extended to 2030 and beyond.

1. The ETS has not substantially reduced emissions

The EU's greenhouse gas emissions have fallen in the decade since the ETS began operating, including in the sectors covered by the scheme, but there is little evidence that emissions trading caused these reductions. Electricity generation accounts for the majority of emissions covered by the ETS, but reductions in this sector are largely the result of other environmental policies, notably feed-in tariffs and green certificates. More generally, analysis of economy-wide drivers of changing levels of greenhouse gas emissions has shown that reductions in ETS sectors can be explained almost entirely by a combination of increases in renewable energy, the economic downturn post-2008, improved energy efficiency, and fuel switching (from coal to gas) in response to other policies and economic variables.

2. The EU ETS is used to undermine other climate and emissions control policies

“Hey! Commission! Leave those emissions alone.... they're already covered by emissions trading.” That's the favourite refrain of business lobbyists in the face of proposed environmental regulations, and time and again it has worked. The EU's Integrated Pollution Prevention and Control (IPPC) Directive was modified to explicitly exclude CO2 emission limits for the “installations” (power stations and industrial plants) which are covered by the EU ETS amid fears that it could lead to energy efficiency improvements, reducing demand for emissions allowances and in so doing weaken carbon prices. Similarly, the revision of the Energy Taxation Directive was weakened (and ultimately abandoned) for fear of affecting carbon prices, and loopholes that exempt aviation and shipping fuels from minimum tax rates were maintained on account of the ETS. Leaked UK government documents showed that it sought to weaken energy efficiency measures and renewable energy targets on the grounds that these could collapse the carbon price. In another notorious case, the Commission's Directorate-General (DG) on Climate Action warned against tougher energy efficiency measures for fear that these could collapse the carbon price.

3. The ETS sets a ceiling on climate ambition

The ETS ensures that greenhouse gas emissions targets are treated as a ceiling on climate ambition rather than a floor. There is no incentive for countries to put in place policies that would encourage companies to over-achieve the target because that opens space for companies in other countries to emit more. The flood of allowances in the system makes it relatively painless to avoid domestic action by cheaply purchasing emissions allowances from elsewhere. To date, the net result has been “cancelling out the abatement that is being delivered by other policies such as the Renewable Energy Supply Directive and the Energy Efficiency Directive.”

The failure of the ETS has been compounded by the fact that the EU’s current emissions target of 20 per cent emissions reductions by 2020 is widely acknowledged to be too low, generating a massive surplus of emissions allowances that will undermine the system well past 2020. A new Market Stability Reserve temporarily removes some of these emissions allowances, but does not cancel them. After these removals are accounted for, an estimated 2.3 billion surplus allowances could remain in use in the ETS by 2020.

4. The EU ETS has not been cost-effective and has subsidised polluters at tax payers' expense

The EU ETS has consistently seen businesses pass on carbon “costs” to consumers that in reality were never incurred in the first place. A handful of large companies have gained (tens of) billions of euros in unearned profits this way, various academic studies have shown. The power sector has benefitted the most, although there is increasing evidence that industrial sectors (especially oil refineries) have engaged in similar pricing tricks.

Heavy industry has also gained considerably from a surplus of emissions allowances, with ten of the largest firms in the steel and cement sector holding onto excess permits worth over €4 billion in the second phase of the scheme.

A further source of inefficiency – and unearned profit – relates to changes state aid rules, which mean public money can be used to pay back industry for the increased electricity costs that result from the profiteering described above. The aluminium, steel, paper and chemicals sectors can all claim up to 85 per cent of these cost increases in the form of state aid (a figure that falls to 75 per cent from 2019).

The free allocation of emissions allowances is set to continue. It should be recalled that this is a major reversal. In January 2008, the Commission announced that these free allocations would end by 2020. Yet the current “reform” proposal keeps to the current formula of 43 per cent of emissions allowances being handed out for free until at least 2030. The Impact Assessment of this proposal suggests that free permits handed out this way could be worth an estimated €160 billion. That is nothing short of scandalous.

5. The ETS remains susceptible to fraud and gaming

All commodity markets contain some illegal activity, but carbon markets have been particularly susceptible to fraud. One key reason is the nature of the commodity being traded. Carbon, unlike corn or oil, is not a tangible product. Carbon permits are a “permission to pollute in the future”, which tends to be estimated by proxy rather than actually measured. Even after a €5 billion VAT fraud, and further scandals involving stolen and re-used allowances, the financial side of the ETS remains under-regulated according to the EU Court of Auditors. The legal definition of emission allowances is not sufficiently clear, the Registry of allowances lacks adequate fiduciary controls, and there is poor cooperation between the Commission and national financial regulators.