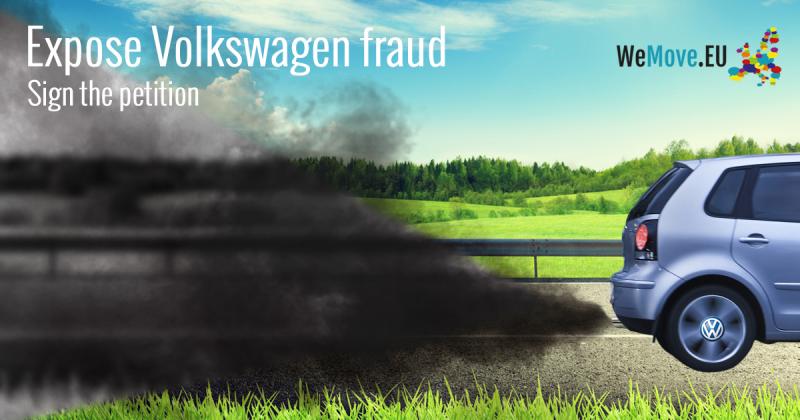 Sign this petition and tell MEPs to start a parliamentary inquiry into vehicle emissions testing.

Why this is important

In 2011 there were 430,000 premature deaths in the EU because of bad air. [1] It’s infuriating that big polluting corporations like Volkswagen can put our health and the lives of our children at risk for extra profit.

It is even more infuriating that some of the very people who are supposed to protect us - our politicians - knew about this. Big businesses have too much power and this needs to be fixed.

With the media’s attention on this scandal building up again it’s the perfect opportunity to expose the fraud so that we can put in place the EU safeguards we need. The EU Parliament must request an independent inquiry into emissions vehicle testing right now.

All we need is 188 of our representatives to take a stand - that’s just a quarter of all European Members of Parliament. With two political groups already calling for an inquiry, our intervention could give courage to those who still want to speak up.

It won’t be easy, Volkswagen and the car lobby industry are powerful and they are pulling every string they can to make sure the EU sweeps the scandal under the carpet. But we are also powerful and our voices count in this debate – in fact, your MEP is your representative in the European Parliament and speaks on your behalf.

The scandal is symptomatic of a ‘better regulation’ agenda in favour of cutting compliance costs and replacing the role of the public regulator with corporate co- and self-regulation. Over the past decade, this approach has favoured a climate in which rules that protect the public interest are considered as burdens rather than investments.

If we succeed this will not only force a European solution to the VW scandal but it will also open up the prospect of fixing the widespread car industry malpractices, the extent of which is still to be uncovered. We cannot stay silent.

This campaign is run in partnership with Corporate Europe Observatory, Friends of the Earth Europe and Lobby Control.