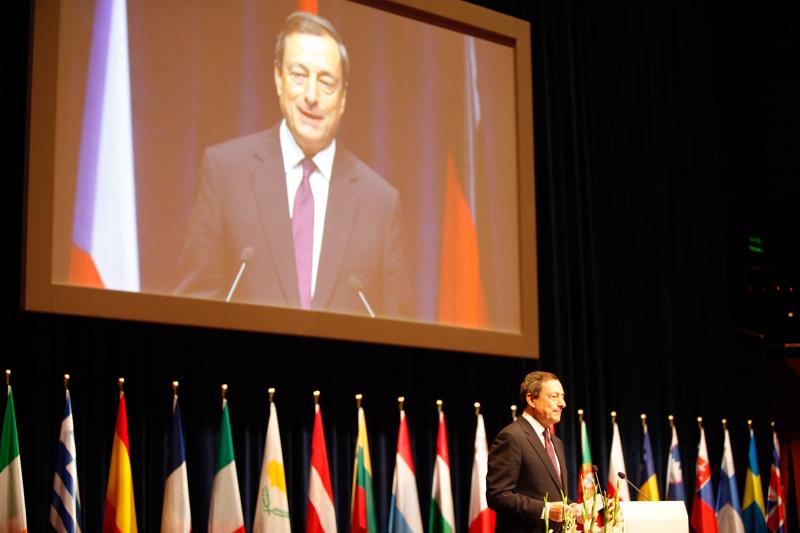 Draghi and the Group of Thirty - an intro

Corporate Europe Observatory has demanded that the President of the European Central Bank Mario Draghi leaves the ‘Group of Thirty’, a club of central bankers and chief executives from private banks. Here we explore what the case is about and why the ECB's response is inadequate.

The methods of the financial lobby

The financial crisis in 2008 should have been a wake-up call. For many years the private financial sector has been allowed to set the agenda for financial regulation, in the US as well as in the EU. It ended in disaster. As a precautionary measure it is vital that central bankers and politicians keep a distance to the financial lobby. The Group of Thirty is a symbol that this is not the case.

What is the Group of Thirty?

The Group of Thirty is a club-like organisation whose members are central bankers and prominent bankers from big private banks such as Goldman Sachs, JP Morgan and UBS. It was set up to discuss global banking regulation – and to influence legislation.

A lobby group – not merely a think tank

The Group of 30 serves as an important interface between private bankers and central bankers. It’s not merely a place to discuss policy on banking, its stated aim is to have an impact on global regulation. On several occasions, the Group of 30 has come out in favour of proposals which are very similar to the positions put forward by the big private banks. This includes regulation of complicated financial instruments (derivatives) and rules on capital requirements for banks.

Draghi is a member

Mario Draghi has stepped back and forth between the worlds of public and private banking. He was previously a member of the Group of Thirty when working for Wall Street investment Bank, Goldman Sachs. Now he participates in the activities as President of The European Central Bank. The Group of Thirty regularly puts out reports on controversial issues, and its spokesperson (Jacob Frenkel, JP Morgan) is an eager participant in the debate on financial regulation and often speaks in the name of the Group of Thirty.

Reputation of the bank, independence and conflicts of interest

The European Central Bank is supposed to be vigilant to any threat to its reputation and independence. The bank also risks being discredited if top level staff have conflicts of interest. Corporate Europe Observatory thinks that Mario Draghi’s membership of the Group of Thirty violates the bank’s own rules and has asked the ECB for a proper explanation. The Bank has not given such an explanation and has refused to acknowledge the problem.

What the hell Paul Krugman does there then ?

Yes, Krugman's membership and indeed his defence of the Group of Thirty seems surprising. As far as we're concerned we have all the necessary facts on our hands to target the Group of Thirty in the manner described above. So the question should be put to him.