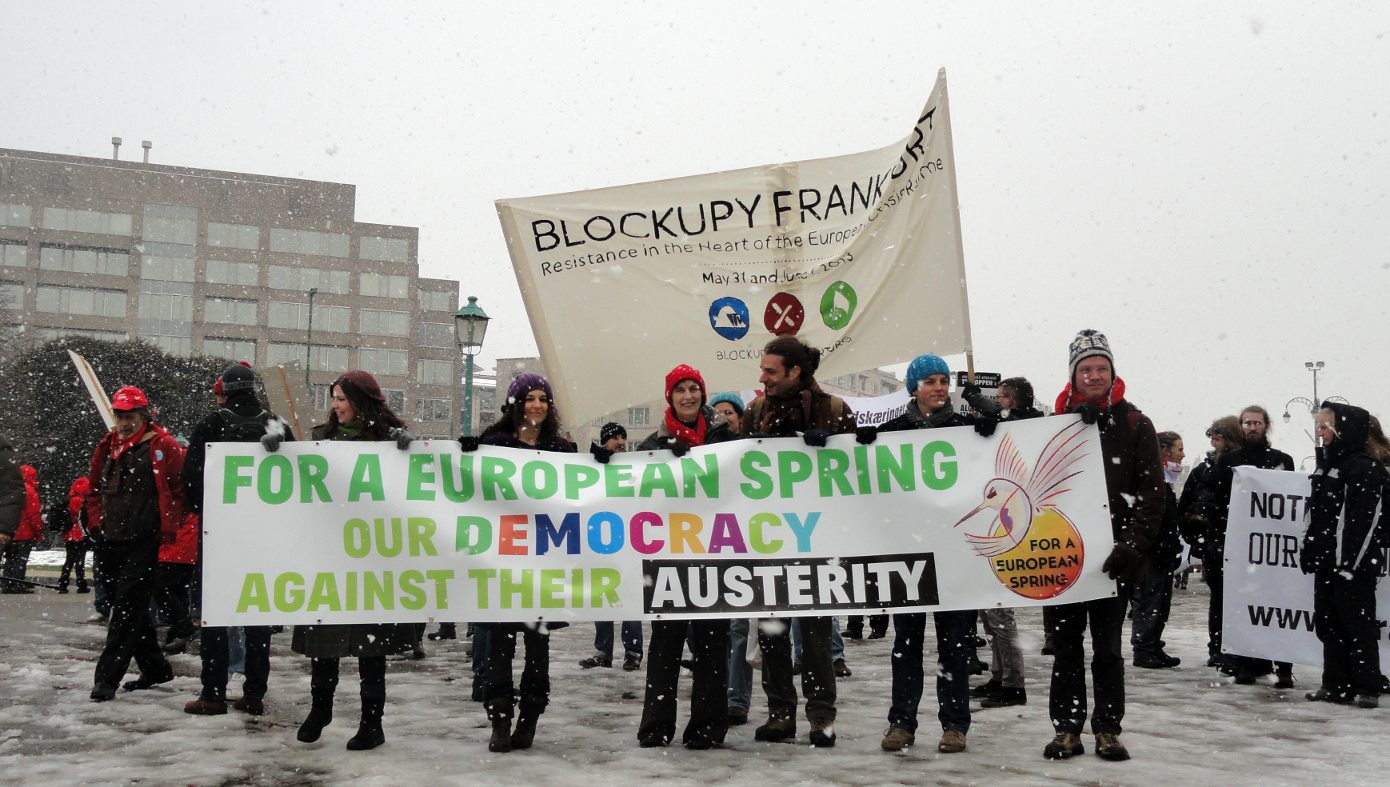 After months of preparation, the days of action organised by the coalition For a European Spring erupted into life last week. However, here in Brussels the police tried to stop it: first banning a peaceful demonstration and then arbitrarily arresting people after a peaceful occupation of the European Commission’s ‘Austerity HQ’. But despite their efforts, the seeds have now been sown, and the pan-European movement against undemocratic and destructive austerity policies is growing.

For a European Spring, Against Austerity

For a European Spring, a coalition of more than 30 groups from 13 countries, came together to reject the European Union's consistent response to the economic crisis: austerity. In Northern and Southern Europe, we're witnessing the dismantling of the welfare state, snowballing unemployment and rapidly falling living standards. That's why the coalition felt that the EU Spring Summit, where political leaders gather to discuss further austerity measures, was the perfect opportunity to send a loud, clear message from the people of Europe that we reject the undemocratic imposition of austerity.

The coalition declared 13Th March as a day of decentralised action, with marches, seminars, general assemblies, and many other activities taking place across Europe while the 14th was a day of concentrated action in Brussels for all Europeans.

Come on a magical Austeritour

In unison with people in Spain, Italy, France, the UK, the Netherlands, Denmark, Poland, Germany, Austria, Slovenia and Greece, in Belgium we organised our own decentralised action: an Austerity Tour of the European institutions as well as the financial and industrial lobbies that have been at the heart of the austerity drive. Accompanied by a samba band and slogan-chanting, the tour weaved through Brussel's EU quarter, beginning with an action at the International Swaps and Derivatives Association (whose activities were declared a risk to public health and the economy, and therefore quarantined – see pictures). After taking in the European Banking Federation, the Spanish Embassy, the repeatedly-bailed out Belfius Bank and the European Commission, the tour ended at Aquafed, the lobby responsible for pushing water privatisation on behalf of the big water corporates. A staged 'tug-o-war' for control of water – between the Troika (the IMF, the Commission and the European Central Bank) and the people – ended in favour of the people. But the real world battle is still far from one, although this short animated video shows what great campaigning is currently ongoing. A secret 'unannounced' stop took everyone on the tour to Business Europe, the city's biggest lobbying association. There we joined them in celebrating their unbridled success during these austere times. Their members are the main beneficiaries of the Troika's enforced privatisation.

Exercising our right to protest

The original day of mobilisation envisaged by For a European Spring was going to begin at the Belgium's central bank and march through Brussels, making our message loud and clear. However, the march was banned by the police on the grounds that they couldn't safely oversee it, but in doing so they denied us our basic right to freedom of assembly and voicing opposition. MEPs from across Europe came out and denounced the police decision, but it's symptomatic of a wider attack on all critical voices that have been brave enough to speak out against austerity. However, those who came to Brussels on 14th March were not disappointed. Hundreds of activists arriving in their busses joined the national trade union demonstration, forming a bloc alongside critical trade unionists and militant metal workers, many of whom are already feeling the impacts of austerity after losing their jobs.

The second part of the day was the most exhilarating: occupying the EU Commission building responsible for imposing austerity, the Directorate General Economic and Financial Affairs (DG ECFIN). The building is home to Olli Rehn, the Commissioner for DG ECFIN who is currently behind the plans to tax all Cypriot bank account holders who have under €100,000. Holding a general assembly in the canteen, groups from around Europe shared the experiences of austerity in their own country, as well as what they were doing to fight back. A peaceful, happy and empowering act of civil disobedience, building bonds between groups. There was a definite feeling that we are fighting the same beast in our separate countries, but that through fighting together we become much stronger. The police had other ideas, violently arresting 32 people despite protestors complying with all police orders.

The harsh police response is not just indicative of the wider repression against dissent, but it also shows how successful we were in rattling the established institutions of power, catching them unawares on the day of an EU summit. Our action even divided the police themselves: those arrested overheard arguments between officers as many agreed with the motives and actions of For a European Spring. The media, also, were out in force to report on it, and not just the usual outlets: the New York Times was also very favourable.

There have so far been no charges, and we are fighting back against the police violence and repression through our legal team – which includes forcing people to sign documents without translation, as well as taking the photos and fingerprints of everyone. The media will also be an important ally. While police brutality is a traumatic experience for all involved, it's creating space for a real discussion on civil liberties and popular will in the face of austerity.

The shared experiences in Brussels have been the result of collective endeavour over years and months, and have built trust and empathy and strengthened our common vision for a bottom-up people-focused democracy. But It doesn't stop here. The World Social Forum is taking place on the weekend of 22 March, connecting European struggles to those in North Africa and beyond; European movements are already planning for Blockupy Frankfurt 2.0 on 31 May, targeting the European Central Bank; the Alter Summit in Athens on 7-8 June will also be an opportunity to strengthen ties and build momentum. And then there will be future EU Summits, as well as struggles at the national level than can be reinforced.

Those fortunate enough to share in the success of the two days of action in Brussels, as well as the multitude of events across Europe, know that this was just a beginning, a small step on a much longer road. But being there and seeing what we achieved, one can't help but feel that the austere winter could soon thaw to reveal a European Spring.

You wonder how long will it be before the police unions will or will not be joining the protests as a collective group and as individual police officers unlike American police unions and officers who don't give a care about working people and other unions even though they enjoy the benefits of having a union.thanks to the efforts of union activists in America.