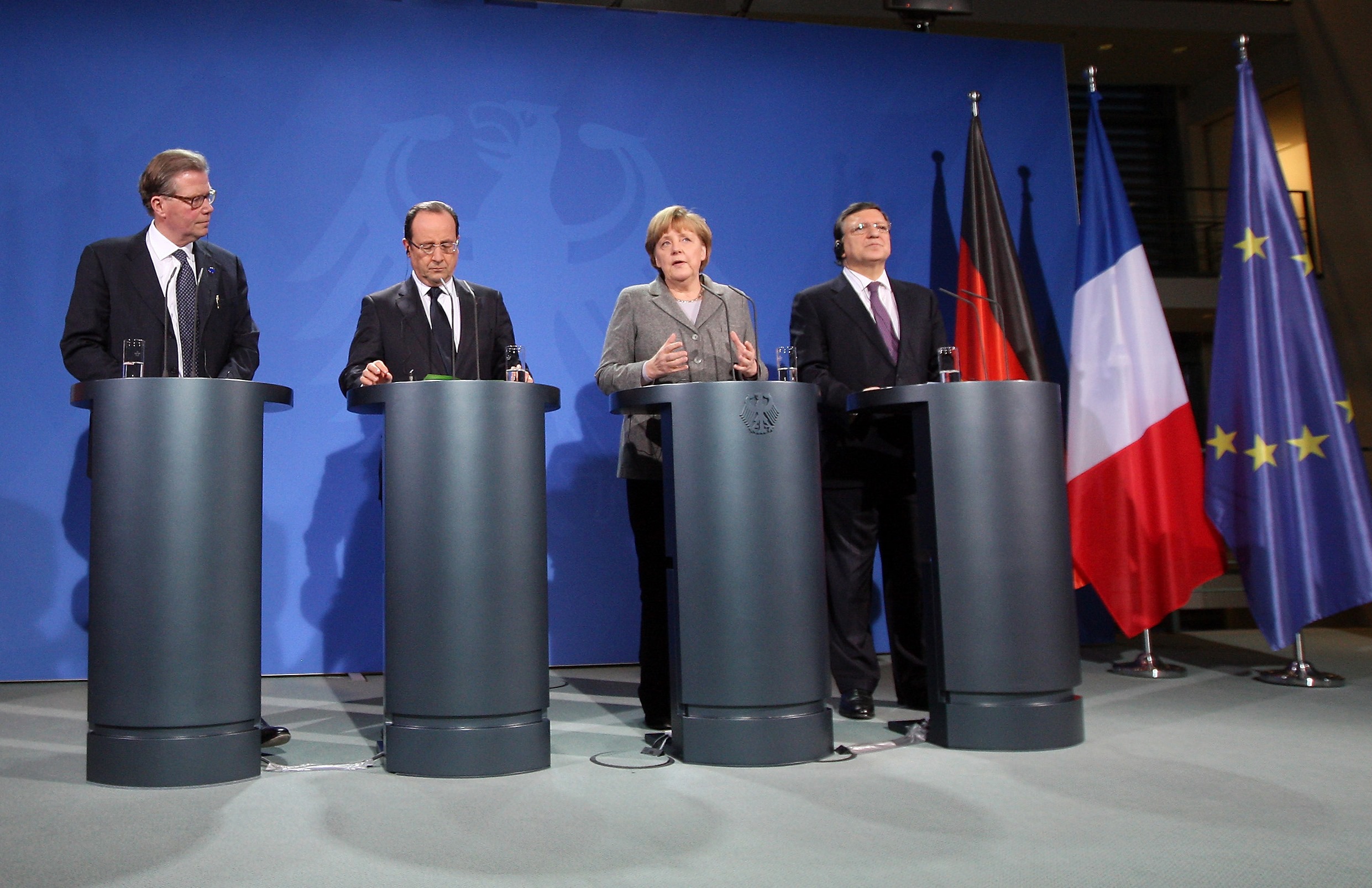 Merkel and the dreams of corporate leaders

On the meeting between the European Round Table of Industrialists and Merkel, Barroso and Hollande.

On 18 March 2013 the heads of Europe’s largest transnational corporations – united as the European Roundtable of Industrialists – met in Berlin with the German Chancellor Angela Merkel, the French President Francois Hollande and the President of the European Commission Jose Manuel Barroso to discuss Europe’s competitiveness. This meeting took place in the context of an ongoing debate over the so-called competitiveness compact which would force member states to implement neoliberal structural reforms. In June the European Council is supposed to convene initial agreements in regard to this compact. Therefore we took a close look at this meeting to better understand the agenda of European political elites and the corporate lobby.

When such powerful people from politics and business meet to discuss one of the main catchwords of our crisis-ridden times, we have to ask, what did they discuss, and more importantly: what did they decide?

It is becoming harder and harder for ordinary people to get heard by those in power as decisions are locked in by austerity treaties and compacts at political levels far over their heads, and years of protest are met not by a change of policies but by increasing repression. Meanwhile the CEOs of Europe’s biggest corporations get the private ear of  three of the most powerful politicians in Europe.

For this reason Corporate Europe Observatory (CEO) used an access to documents request to at least find out what was discussed in Berlin. It seems the meeting’s participants all have a very good memory because there are astonishingly few documents covering the meeting. In fact there are no minutes recording what was said in the meeting itself. But we know some of the format and content of the event because of advanced email exchanges and one document sent by the ERT to the participants.

First and foremost the emails reveal whose idea the meeting was. According to the email correspondence between Angela Merkel’s Cabinet and Barroso’s Head of CabinetSecretary General Johannes Laitenberger, it was Merkel who first raised the idea of convening with the ERT and Hollande on the topic of competitiveness in a phone call with Barroso on 25 November 2012. This is interesting because, along with the European Commission and the business community, it is Merkel who is a driving force of what are known as the politics of structural reforms. This became abundantly clear in January at the World Economic Forum in Davos, when she demanded a so-called competitiveness compact. Member states, she proposed, should enter into agreements with the European Commission, in which they undertake to improve elements of their "competitiveness" which are not yet at the "level required".

Merkel's idea is that the competitiveness compact should be designed along similar lines to the fiscal compact already in place. Thus she further develops the Commission’s idea of “competitiveness contracts” with financial incentives for member states as rewards for compliance. She also made the revealing argument that governments need pressure for “structural reforms”, mentioning the German "success” of the labor market reforms known as Hartz 4 which to a large extent are responsible for decreasing or stagnant wages in Germany over the last decade. This is clearly an indication of the model  of structural reforms on offer.

Merkel’s initiative in proposing the meeting with the ERT can therefore be understood as an attempt to increase the weight of her argument against the sometimes-reluctant French President Hollande, by bringing him under the influence of the Commission and the “job providing” industries of Europe, both of whom share her concerns.

While it became clear that the German Government was one of the driving forces behind this meeting, the access to document request also revealed some of the content of the meeting, more specifically the ERT’s demands.

A paper entitled “Restoring Europe’s competitiveness, growth and employment” by the ERT sent to the participants in advance, sets the agenda and in bullet points raises the main demands. The agenda of the ERT as shown in this paper can be summed up as a comprehensive attack on society: the welfare state, social rights and the environment. According to their policy recommendations what they are demanding is the “fulfilment” of the single market, which means more competition between the big players on the European landscape, while local alternatives and small businesses are unprotected and doomed to fail  1

There is a remarkably candid call for cheap energy for Europe’s large industries: “Keep all energy options open, including shale gas and oil”2.

But the agenda appears to be the harshest when it comes to labour. The ERT wants to see “modernised job protection measures including reducing redundancy notice periods and severance payments in exchange for training for new jobs” 3. 'Modernity' in this context means less protection and social benefits in exchange for often useless and humiliating trainings, notorious in the German “Hartz 4” system. In addition they want to “link wage evolution to productivity improvements, international competitiveness and individual performance.”4 This demand is a clear attack on the basic labour right of collective bargaining, by linking wage evolution to business needs instead of outcomes of collective agreements. International competitiveness is hard to measure as an indicator (for instance, what would international competitive wages in comparison to China look like?) and what is meant by rewarding "individual performance" is in fact a way to put workers in direct competition to each other and thereby undermine solidarity.

As there is no coverage of the meeting itself we don’t know the whole story, in particular what position the three politicians took on the agenda of the ERT and if they decided or agreed to anything specific. Nevertheless, the current crisis policies and the push for the so-called competitiveness contracts are clearly in line with big business’ demands. Together, Europe’s political leaders and big business are continuing to exploit the crisis for the sake of private profit and neoliberal ideology instead of solving it in the public interest.

It is extremely worrying that such important leaders can meet behind closed doors  and discuss subjects which affect our everyday lives to such a huge extent, while the public remains ignorant of what is talked about and how it could shape their futures.