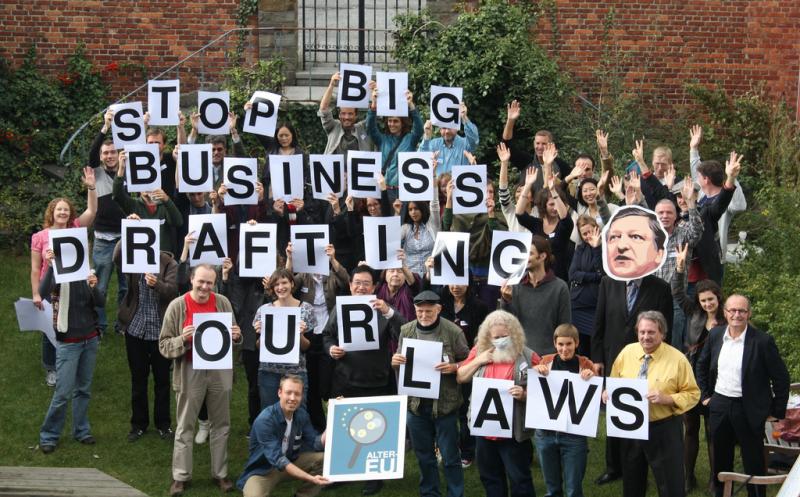 Mad Men of the Roundtable

Merkel and Hollande have given key positioning to the European Roundtable of Industrialists and their corporate wish-list. They are set to influence a future Competitiveness Pact – a next step towards authoritarian neoliberalism.

Merkel and Hollande are rebuilding the Franco-German engine for the next steps of EU integration. The two core governments are going for a leading role in the creation of new rules on common economic policies, in particular the upcoming Competitiveness Pact. As if to make sure that what they come up with fits neatly with the interests of big business, they’ve invited the European Roundtable of Industrialists (ERT), one of the most powerful lobby groups in Europe, to help them out. In response, the ERT seems to be laying on the table an entire corporate wish-list. If big business gets its way, will 'competitiveness' be the only thing that counts?

First, German Chancellor Angela Merkel invited French President Hollande and Commissioner Barroso to Berlin in March for an encounter with no less than 15 members of the ERT, all of them CEOs from big corporations1. The two governments then selected two ERT veterans, Gerhard Cromme (Siemens) and Jean-Louis Beffa (Suèz), to be chairs of a Franco-German “Working group on Competitiveness”2. While Beffa left the club recently, the choices remain worrying. That's because the demands of the ERT appear to amount to nothing less than putting the European Union entirely at the service of corporations.

Mad men of the roundtable

This is clear from the breathtaking ambition of the ERT's plans, laid out in recent statements, which don't just address a few upcoming proposals, but the entire body of legislation – past and present – that affects business. Their wish-list is all encompassing3:

The report from the EU's Franco-German Working Group is – not surprisingly given its ERT veteran chairs – rather similar5. It says straight out that the European Union should “refrain from introducing new legislative proposals that are detrimental to investments”, as if no other interests are valid. It then goes into the specifics of what reads like a corporate wish-list. In short, the business group wants to see cheaper energy, including by bringing fracking to Europe, reduction of taxation, unrestricted access to raw materials globally, a roll back of the (already very limited) achievements in banking regulation, a further weakening of labour laws across Europe, and a massive strengthening of private alternatives to public services (i.e. privatisation). As working group Chair Gerhard Cromme once famously stated: “Far preferable would be the privatisation of all schools, subjecting them to market forces and thereby encouraging competition: Schools will respond better to paying customers, just like any other business..."6.

In addition to this, there are a few proposals included to remind us that it’s not just any old business community whose interests are to be protected but the largest and most powerful: the recommendations include an attack on attempts by the Commission to stop mergers and acquisitions to prevent monopolies. Clearly in there interest of the very corporations represented in the ERT.

What is their key argument? It’s the big EU buzz word “competitiveness”, of course.

Towards a Competitiveness Pact

The Working Group's report comes at a time when Angela Merkel and Hollande are gearing up to get the other member states to sign up to a “Competitiveness Pact”. That project has been in the pipeline for several months, and for a while interest seemed to be fading. But with the Franco-German initiative, a specific procedure is on the table that foresees a final proposal to be agreed either in December this year or in early 2014 at the EU Spring Summit. At the heart of the pact will be “contractual arrangements” that are to bind member states economic policies to “structural reforms”, such as weakening of labour laws, low wages, business friendly regulation, and much more.

In this field, the preferred approach of the Working Group is simply to have member states commit – by contract – to implement the recommendations that the Commission issues annually on budgets and economic policies. Considering the nature of these recommendations, this is scary.

With the European Union continuing along the path of a kind of authoritarian neoliberalism, there is every reason to keep a close eye on the next steps. And the next step is likely to be a Competitiveness Pact, now seriously being fleshed out with big business as the key advisors.

Some might think of the European Roundtable of Industrialists (ERT) as a relic of the past. Two or three decades ago, the club of CEOs of big European corporations would be in on even the biggest decisions on the development of the EU treaty. But with today’s swarming and mushrooming corporate lobbying in and around the EU institutions in Brussels, you might think, the supreme lobby group had taken the back bench.

The Franco-German initiative shows that this is certainly not so. The ERT was always a group that kept its distance from petty squabbles over single pieces of legislation, but instead moves resolutely when the big issues are at stake. This is a case in point. The ERT has outrageous plans that with breathtaking ease they are invited to bring to the table where our future is being mapped. Does this mean that Merkel and Hollande will simply cut and paste their advice into proposals for upcoming discussions at EU summits? Probably not, but letting this group set the agenda to this extent is already a worrying sign, and one that should provoke social movements all over Europe to get ready for a decisive struggle.

The Competitiveness Pact will be debated at a public meeting in Brussels on Wednesday the 26th of June. Read more here.

Mad Men of the Round Table
Leo

The destruction of school as we know it (I am 70 years old) is almost complete in most of the western world -- Europe being no exception.

It is proved that introducing computers and screens at an early stage destroys the education, the formation of the intellect and criticism. Consumerism and predatory hypercapitalism work hand in hand and have taken over and lead us to the destruction of the society.

Only a huge surge in solidarity and consciousness of common decency, of common sacred values, can defer, if not defeat them.