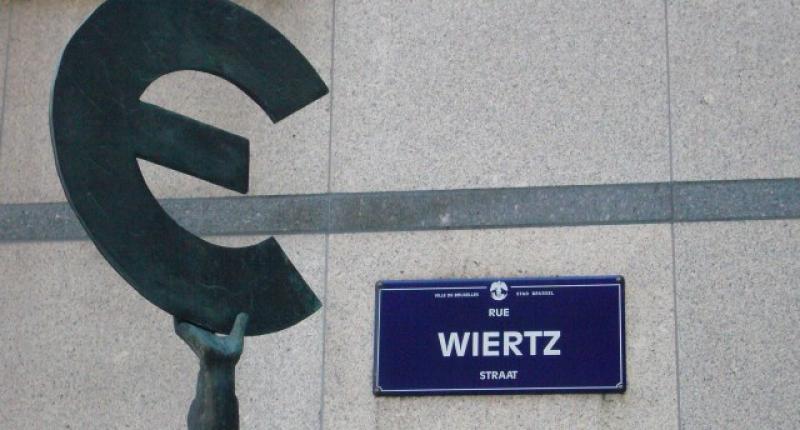 Eurobills: Not a progressive solution for the European debt crisis

The Commission is preparing proposals for the mutualisation of debt and the creation of eurobills in order to relieve pressure in the crisis-hit eurozone. These might be controversial proposals within the Council – where some elements see them as dangerously progressive – but in fact, to populations in highly indebted European countries, they will offer no real relief. This is clear from the neoliberal conditionalities included in the Commission’s draft, as well as from the corporate capture of the advisory group the Commission established to advise it on the finer details.

To help it in its plans to tackle the eurocrisis, the European Commission has set up an advisory group, the “Expert Group on debt redemption fund and eurobills”. Both ideas – a debt redemption fund and eurobills – are a move towards debt mutualisation, i.e. spreading the debt burden and borrowing costs away from the eurozone’s worst-hit economies towards the stronger ones.

One might even conclude, therefore, that setting up this Expert Group is a sign that the Commission is moving away from enforcing painful austerity on the likes of Portugal, Greece and Spain, and is instead adopting a softer position that has been resisted by Germany but supported by some progressive European federalists. The hope those progressive federalists share is that instruments to mutualise debt within the eurozone would ease the pressure of high interest rates in countries hit worst by the crisis. In contrast, Germany and other countries currently able to borrow cheaply would have to pay more.

But take a closer look at who the ‘experts’ within the group are, and combine that with the Commission’s draft proposals already on the table, and it becomes clear that the debt redemption fund and the eurobills are in fact yet another step towards deepening Europe’s economic and monetary union, which in turn is responsible for the ever-greater rolling back of democracy in the name of imposing its neoliberal economic dogma – no matter what the cost to the living standards of people across Europe.

Both the redemption fund and the eurobills idea were briefly outlined last November as steps to be implemented in the medium-term in the Commission’s “Blueprint for a deep and genuine economic and monetary union”. However, for the Commission to introduce both ideas in the medium-term, it first requires certain conditions to be fulfilled. One such condition is the implementation of the “Competitiveness and Convergence Instrument”1, which entails increasing the power of European institutions so they can effectively veto national budgets if they are not in line with the Commission’s own economic strategy. Therefore further neoliberal reform is required before these supposedly progressive measures would be implemented.

Even then, both proposals by the Commission come with strings attached. The idea of the redemption fund is that eurozone member states can transfer any debt above 60% of GDP threshold into this fund and thereby ease the cost of borrowing money and keeping their economies going. But the Commission is intent on imposing strict conditionality on any country trying to access such a fund:

(2) immediate penalty payments in case of non-compliance with the rules;

(3) strict monitoring by a special institution (e.g. Court of Justice of the EU);

(4) an immediate stop of debt transfer to the fund during the roll-in phase in case of non-compliance with the rules;

(5) pledging of Member States’ international reserves (foreign exchange or gold reserves) as a security against their liabilities and/or assignment of (possibly newly introduced) taxes to cover the debt service (e.g. VAT revenues) to limit the liability risk.” 2

This means two things in practice. Firstly, it extends Troika-like neoliberal and austerity policies to a greater number of countries (see point 1), which have to date entailed weakening labour laws, widespread privatisation of public assets and services, cuts in social expenditure and other similarly destructive policies. Secondly, the Commission’s conditionality will effectively expropriate the foreign exchange or gold reserves of the concerned states (point 5), further shifting power away from sovereign, democratic states. Such conditionalities reveal the debt redemption fund to be far from progressive.

Similarly, the eurobills proposal – like a European bond – is far from progressive. At face value, the proposal would mean that the eurozone as a whole issues bonds for countries in need, therefore using the superior credit ratings of the zone’s stronger economies to allow weaker ones to borrow at cheaper rates. However, the Commission wants the eurobills to be of a short maturity (one to two years), which, in contrast to long term bonds, would make it easy for the Commission (or whatever Institution would be in charge) to exclude a state from the eurobills if it is not considered to be fiscally disciplined, increasing its control over member states’ economic policy making.

As outlined in the Commission’s blueprint, not only does it want more control over member states’ budgets as a condition of introducing both debt mutualisation policies, it also wants to combine them with the introduction of an “EMU Treasury”. While no details have been released, it would potentially be a new and powerful European institution that would further enforce the Commission’s neoliberal doctrine. Given the Commission’s current economic policy trajectory, handing it any further power or creating a new entity within it would only strengthen the neoliberal agenda of an unelected institution that Corporate Europe Observatory has continuously shown to be captured by corporate interests.

An Expert Group of corporate interests

One might hope that the new Expert Group now being set up by the Commission to examine the issues of a debt redemption fund and eurobills could bring to bear some critical thought on the subject and be able to influence the agenda in a more progressive direction. But a quick look at the group’s composition shows that this is an unlikely scenario, with almost all members sharing the Commission’s neoliberal outlook (see box below)

The chairperson, Gertrude Tumpel-Gugerell, is on the Board of Directors of Commerzbank, while two others are on the Board of Directors of the Swiss bank UBS. Among the other ‘experts’ are CEOs of big corporations, delegates of business associations and former advisors of the ultra-neoliberal Vice-President of the Commission Oli Rehn, among others. Unfortunately there is not one ‘expert’ in the group who goes against the Commission’s neoliberal outlook, and in particular no-one who would bring in the perspective of the millions living in Europe’s periphery.

One member deserves special attention: Mr. Graham Bishop, a well-connected consultant within the Brussels bubble who offers his services mainly to financial industries. Mr. Bishop –an admirer of Margaret Thatcher and the former unelected Prime Minister of Italy Mario Monti – sees the main problem of the eurozone as the lack of competitiveness in countries such as Spain and Greece. In other words, he brings the same flawed perspective on escaping the eurocrisis as the Commission, i.e. that periphery countries just need to increase their competitive advantage – despite this very same dynamic being a major reason behind the eurocrisis .

For a long time Bishop has acted as an important power broker. In the early 90s he served on the Maas Committee which prepared the changeover to the euro, and later he was on the Financial Services Strategy Group which played an important role in the liberalisation of Europe’s financial markets. And only recently – in early 2012 – he came up with a proposal, together with the “European League for Economic Co-operation” (ELEC), for so-called T-Bills – a forerunner to the current eurobills proposal – which he presented to Council-President Herman Van Rompuy and which seems to be the reason why he is now on the expert group.3

Before discussing T-Bills/eurobills further, it is worth noting that this group also undoes much of the recent progress between the Parliament and the Commission to ensure fair and balanced expert groups. After MEPs resorted to freezing all Expert Group budgets in 2011 and then again in 2012 due to a lack of improvement, an agreement was reached that:

These four conditions were put in place to avoid exactly this sort of eventuality, and this group shows how important it is for DG ECFIN to respect the agreement made between MEPs and the Commission.

The eurobills now being discussed by the Expert Group are very much the same idea. According to a paper by ELEC, T-Bills would mean: “The stronger nations would support the weaker in return for the weaker undertaking reforms that should strengthen them in the future.” 4

In reality, the reforms envisaged by Bishop and ELEC are actually the same neoliberal ones being proposed by the Commission. In other words, instead of real solidarity that would lead to future strengthening of Europe’s weaker economies, T-Bills would be tools to further force neoliberal-structural reforms on member states.

To guarantee policy “compliance” once the bills are issued, the proposal offers two mechanisms in particular. First and foremost a eurozone member state can only participate in the T-Bill fund if its economic policy has been accepted by the ECOFIN (Economic and Financial Affairs Council). While the Commission’s current eurobills proposals are rather vague, T-Bills are explicit in demonstrating how they would take economic policy out of the hands of democratically elected national parliaments towards Brussels via the European Semester 5, a recently introduced series of steps to monitor the economic and budgetary affairs of member states. Secondly, ELEC wants any member state raising finance through T-Bills to pay a surcharge if they are found to be exceeding the debt and deficit criteria of the Stability and Growth Pact 6. According to ELEC, placing such a surcharge on top of the existing borrowing costs,“should be sufficient to play a constructive role in disciplining policymakers” 7. In short, ELEC and Bishop want to use the T-Bills to further austerity policies via forcing countries that need to raise finance to comply with the Stability and Growth Pact.

It’s highly worrying that the Commission has chosen such a narrow range of neoliberal views and vested interests to give input to its proposals via the Expert Group, especially as in theory they are supposed to be helping Europe’s beleaguered countries. It certainly underlines the Commission’s determination to stay the neoliberal course, as well as their affinity for basing their expertise on corporate interests.

Progressives shouldn’t have any illusions about these instruments. The current balance of power, in particular at the EU level, ensures that every new step towards further European integration deepens the neoliberal mission. While some states may feel a temporary relief in their borrowing costs, their citizens will soon be feeling the full force of further neoliberal structural reform.