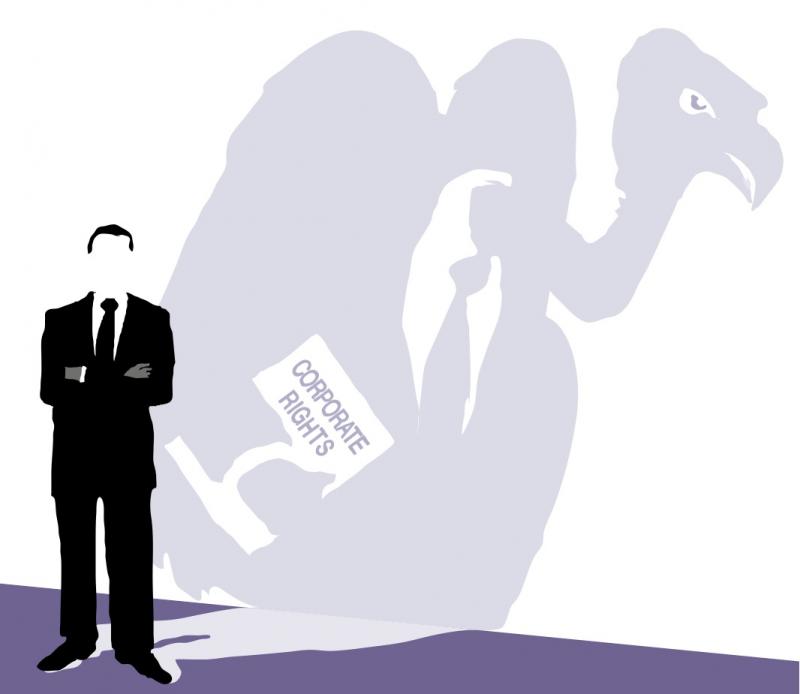 Since the economic crisis hit Europe, international investors have begun suing EU countries struggling under austerity and recession for a loss of expected profits, using international trade and investment agreements. This is revealed by a new report released today by the Transnational Institute and Corporate Europe Observatory. The investors – and the lawyers involved – are scavenging for profits amidst crisis-hit nations, providing a salutary warning of the potential high costsof the proposed trade deal between the US and the EU, which start its fourth round of negotiations today in Brussels.

Profiting from Crisis is a story about how corporations, backed by lawyers, are using international investment agreements to scavenge for profits by suing governments from Europe’s crisis countries. It shows how the global investment regime thrives on economic crises, but is very uneven in who it benefits. While speculators making risky investments are protected, ordinary people have no such protection and – through harsh austerity policies – are being stripped of basic social rights.

And read the executive summary here (also available in German, Spanish and Greek):

For a long time, European countries were left unscathed by the rising global wave of investor-state disputes which had tended to target developing countries. In the wake of the global financial crisis, however, corporations and investment lawyers have turned their eyes to potential pickings in Europe. An investment regime, concocted in secretive European board rooms, and that gives corporations powerful rights to sue governments, has finally come home to roost.

The report first explores the history of investor-state lawsuits as a result of economic crises across the world from Mexico in 1994 to Argentina in 2001. As crises struck these nations scrabbled desperately to protect their rapidly sinking economies; the measures they took have since come under systematic attack from corporations. Countries have been sued for measures to revive a domestic financial system or the freezing of public services’ tariffs to keep them affordable for their people. Some measures, such as sovereign debt restructuring (renegotiating terms with creditors) are even required as part of debt deals, yet have been similarly challenged by investment lawsuits.

The legal bases of these lawsuits are the over 3000 international investment treaties in existence to date. They contain far-reaching protections of private property enshrined in catch-all clauses such as “fair and equitable treatment” and “protection from indirect expropriation”. The trouble is that these clauses have been interpreted so broadly that they gave a carte blanche to corporations to sue states for any regulations that could be deemed to affect current or future profits. Moreover, investment treaties grant corporations rights to protection, without giving equivalent rights to states to protect their own citizens.

Profiting from Crisis looks closely at how corporate investors have responded to the measures taken by Spain, Greece and Cyprus to protect their economies in the wake of the European debt crisis. In Greece, Poštová Bank from Slovakia bought Greek debt after the bond value had already been downgraded, and was then offered a very generous debt restructuring package, yet sought to extract an even better deal by suing Greece using the Bilateral Investment Treaty (BIT) between Slovakia and Greece. In Cyprus, a Greek-listed private equity-style investor, Marfin Investment Group, which was involved in a series of questionable lending practices, is seeking €823 million in compensation for their lost investments after Cyprus had to nationalise the Laiki Bank as part of an EU debt restructuring agreement. In Spain, 22 companies (at the time of writing), mainly private equity funds, have sued at international tribunals for cuts in subsidies for renewable energy. While the cuts in subsidies have been rightly criticised by environmentalists, only large foreign investors have the ability to sue, and it is egregious that if they win it will be the already suffering Spanish public who will have to pay to enrich private equity funds.

Profiting from Crisis reveals how:

The deepening crisis in Europe’s crisis countries has attracted more and more circling vultures, scavenging for profits. In 2012, New York-based Greylock Capital argued that buying Greek bonds was “the trade of the year”. At the time, investors were paying 19 to 25 cents for bonds for every dollar worth of bonds.

In April 2013, US-based law firm Skadden which represents Cyprus Popular Bank (Laiki) in a looming multibillion-euro investment treaty dispute against Greece praised the “increasing appeal and novel use of Bilateral Investment Treaties”. The firm noted, “the appeal of BIT tribunals, coupled with the economic uncertainty of recent times, has triggered an increased use of BITs to resolve disputes in ways that previously had not been encountered by arbitral tribunals, and we expect this trend to continue.” The experience of Argentina, which faced 55 investor lawsuits in the aftermath of its crisis in 2001, shows that claims keep coming some time after a crisis. The cases listed in this report are almost certainly just the beginning of a new wave of investor-state lawsuits against European countries.

The European and American public were understandably angry about bailout of the banks. It is time now to turn a spotlight on the bailout of investors and call for a radical rewrite of today’s global investment regime.

As a first step, we believe EU governments should seek to terminate existing investment agreements. In particular, European citizens and concerned politicians should demand the exclusion of investor-state dispute mechanisms from new trade agreements currently under negotiation, such as the proposed EU-US trade deal. A total of 75,000 cross-registered companies with subsidiaries in both the EU and the US could launch investor-state attacks under the proposed transatlantic agreement. Europe’s experience of corporate speculators profiting from crisis should be a salutary warning that corporations’ rights need to be curtailed and peoples’ rights put first.

That is what these corporations are, incapable of feeling guilt, empathy, or remorse for their behavior.
I think this is a new low, to hurt the people of a nation who are already hurting.

I was just seeking this info for some time. After six hours of continuous Googleing, at last I got it in your web site. I wonder what is the lack of Google strategy that don't rank this kind of informative websites in top of the list. Generally the top sites are full of garbage. ddafeefdadcbbdfb