Will reform prove too taxing for the Platform for Tax Good Governance?

On Thursday the Commission's department responsible for cracking down on tax dodging, DG TAXUD, will host the third meeting of its Platform for Tax Good Governance. The controversial Platform – key to implementing Commissioner Šemeta's far-reaching plans, but packed full of individuals representing the biggest tax dodgers and their accountants – was supposed to be reviewed. As the infographic* produced with Arbeiterkammer and ÖGB shows, there are serious problems. Yet according to staff within DG TAXUD the review – with no consultation of group members nor the public – has finished and the same tax dodgers remain in the group. 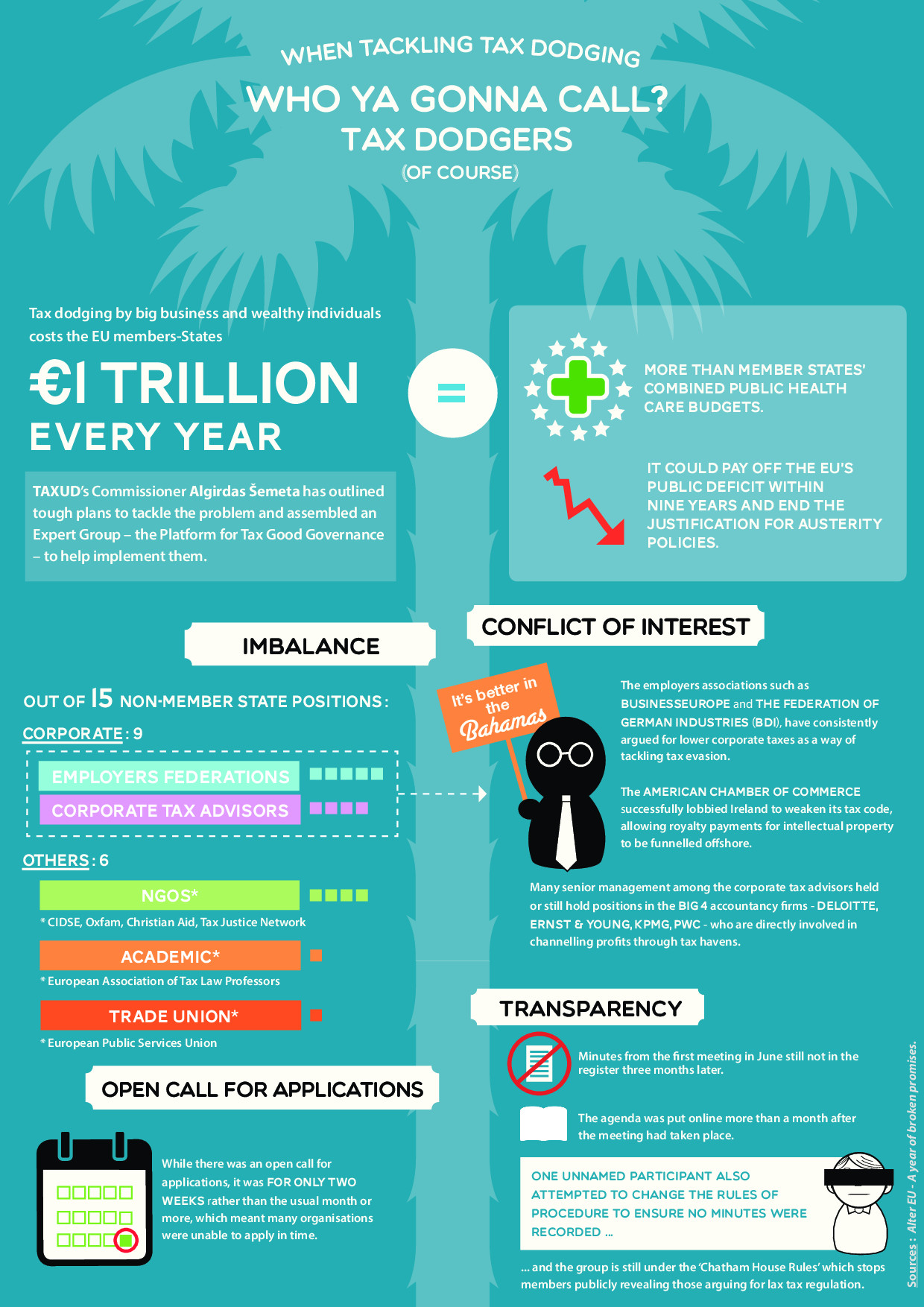 NGOs are very supportive of Šemeta's plans for tackling tax evasion, and of creating a Platform to see how the plan can be implemented. But inviting organisations who support weaker and more 'competitive' tax regimes – such as the US Chamber of Commerce and BusinessEurope – will not see the plan deliver on its ambition. Many civil society organisations wrote to Commissioner Šemeta asking for the group composition to be changed, highlighting the clear commercial conflicts of interest as well as ignoring the groups own mandate when selecting members, as did a cross-party group of MEPS. Civil society groups sitting on the Platform also raised the issue, so when the Commissioner agreed to a review, there was hope it would lead to a positive reform.

Commission officials have since confirmed that the review is complete. The process has been kept secret, with no group members nor public consulted, and no clear outline of what was being reviewed according to which criteria. The only change is that the NGO Tax Justice Network was unable to maintain its role in the group due to capacity issues, and has been replaced by the European Confederation of Independent Trade Unions (CESI). This means the group continues to be dominated by organisations who either actively campaign against stronger tax regimes or those that create loopholes to avoid them.

However, a recent meeting with senior TAXUD officials provides some hope. As well as a commitment to make the review process public, there was also a recognition that having organisations who explicitly campaign and lobby against the aims of the Commission could be perceived in public as problematic.

With the third meeting of the Platform taking place on Thursday 6 February, it is essential that the Commission not only opens the review up for public scrutiny, but also re-opens and extends it to include public consultation and the views of existing members. Commissioner Šemeta and NGOs both want to tackle aggressive tax planning and clamp down on tax havens, but if the Commissioner's plans are to be realised, he needs to ensure that organisations who have a direct commercial interest in stopping him are not allowed to do so through their Platform membership. Lets stop putting foxes in charge of the hen house.

* The infographic was created by Elisabeth Meur in November 2013 to accompany the launch of ALTER-EU report, 'A Year of Broken Promises: Big business still put in charge of EU expert groups, despite commitment to reform'. It does not include the latest change of membership.