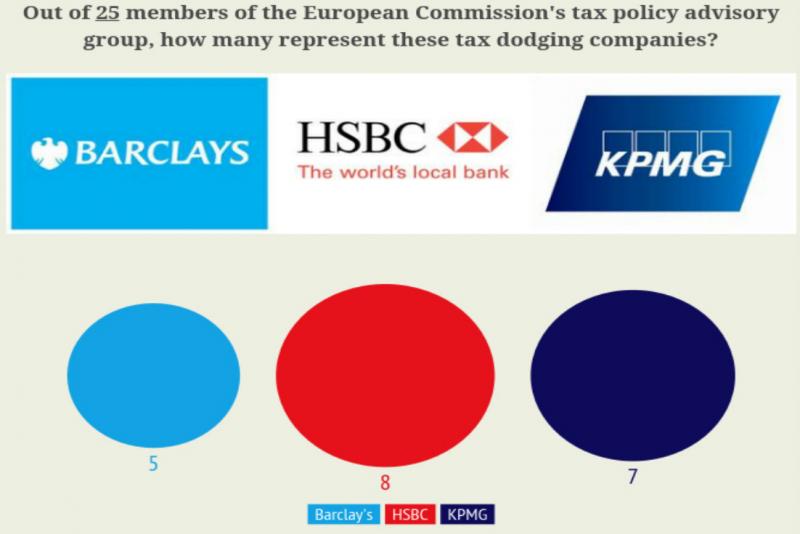 On the same day the Swissleaks tax dodging scandal breaks across Europe, a tax expert from the very same bank involved, HSBC, takes a seat in the European Commission. Not there to answer questions on his employers' outrageous and highly-illegal tax avoidance practices, rather John Everett has been invited to give the Commission advice on tackling tax dodging as a member of a newly-formed advisory group. Alongside him are colleagues from Barclays (the British bank once accused of running a “tax avoidance factory”) and three employees from KPMG, one of the accounting firms exposed in the Luxleaks files.

Unfortunately, as shocking as this case may appear, it is just the latest example of a Commission advisory group, formally called Expert groups, being dominated by corporate interests. The European Ombudsman is investigating the issue and has recommended structural and legally-binding changes to prevent such occurrences in the future. The deadline to respond is today, but the Commission has already admitted it won't meet it. The new deadline is 31 May. Will the finance industry and others still be left in the driving seat or will the Commission take long-over due action?

Last October, the directorate-general responsible for taxation issues, DG TAXUD, set up a new expert group on the automatic exchange of financial account information (AEFI) between countries. The aim of the group is to advise the Commission on how to implement the practice across the EU, helping to facilitate cross-border tax investigations and combat tax avoidance and evasion.

However, further investigation reveals that the group is dominated by the corporate finance industry. Indeed, out of the 25 seats granted, TAXUD gave 16 to representatives of big banks and corporate financial institutions.

And despite the group's terms of reference calling for diversity among members (“business, consumers and EU citizens”), including “the size of the financial sector represented by the organisation,” many members in fact represent the same big banking interests. Three seats are taken by national banking lobbies – the British, French and Luxembourg Bankers Associations – which all represent the interests of the biggest multinational banks. But as if that was not enough, their regional umbrella association, the European Banking Federation, has also been given a place at the table.

Of the remaining nine seats, three were allocated to hybrid associations (representing both private and public members) and one to a cooperative. Civil society organisations were granted a total of five seats out of 25, while there is a glaring absence of trade union and representatives from the small and medium business sector.

The lack of transparency of members is also problematic, effectively hiding the true identity of experts. The most alarming case is that of John Everett, officially representing the British Bankers Association but also the Head of Tax Services at HSBC Securities. Should HSBC be there? The bank recently attracted widespread public anger after its role in promoting tax avoidance schemes among its clients was exposed by the Swissleaks scandal, which led to criminal investigations in France and Belgium. However, this was not the first time the banking group has been investigated or charged for financial misconduct. Indeed, it was forced to pay $3,473 billion for breaking market manipulation in the foreign exchange scandal and facilitating pension fund fraud, among others. The Commission has charged HSCB for rigging benchmark interest rates which the bank will try to fight in a closed hearing scheduled for June.

Yet HSBC is not only advising the European Commission: Everett sits in similar groups in the UK, the US and the OECD. But even if Everett was no longer sitting in the group, HSBC has plenty of other avenues to defend its interests, being a known member of at least eight1 of the participating associations in the AEFI Expert Group.

Barclays is another British bank that is directly participating in this group. Its Head of Tax, Martin Gilmartin, is registered as the representative for the International Swaps and Derivatives Association (ISDA), but he is also listed as the alternate member for the British Bankers Association. Like HSBC, Barclays' representation in the group multiplied by its membership of at least five2 participating associations.

While Barclays has not been in the news as recently as HSBC, one doesn't need to look back too far to find plenty of evidence of financial misconduct, including promoting tax avoidance schemes. Its antics saw the bank dubbed as a “tax avoidance factory” by British peer, Lord Oakeshott. In total, it has had to pay $1,596 billion in the US to settle a variety of misconduct charges, ranging from interest-rate fixing (it was also fined in the UK) to insider trading and energy market manipulation. Barclays only managed to avoid a heavy EU fine for its role in the rate rigging “Euribor cartel” because it cooperated with the investigation.

The most blatant example of a law-breaking financial institution being represented in a Commission expert group is neither HSBC nor Barclays. That award goes to KPMG, one of the “Big 4” accountancy firms named in the Luxleaks files for brokering secret tax deals for its clients. The firm has three employees participating directly in the AEFI group, representing three different associations: Kevin Charlton, Director of Investment Management Tax at KPMG (represents the Association of Alternative Investment Association); George Bock, Managing Partner at KPMG Luxembourg, (represents the Association of the Luxembourg Fund Industry); and Gerard Laures, also a partner at KPMG, (alternate representative for Association of the Luxembourg Fund Industry but also represents the Luxembourg Bankers Association)3. And like HSBC and Barclays, KPMG's interests are further represented in the group because it is a member of at least seven4 of the associations around the table.

As well as being at the heart of the Luxleaks scandal, KPMG has been investigated and charged for financial misconduct several times. An investigation by the UK Parliament's Public Accounts Committee concluded that KPMG had used 'insider knowledge' to offer tax avoidance schemes to its clients. Also in the UK, KPMG has had to pay a £390,000 fine for compromising the quality and independence of its audits in two separate cases. MEP Martin Ehrenhauser's 2014 report recommended that KPMG should not be allowed to sit in expert groups in light of its law-breaking behaviour.

And if Europe's biggest banks did not feel their influence was being fully exerted, minutes of the first meeting show that the European Banking Federation (EBF), has been tasked with coordinating the group – despite this contravening the group's Rules of Procedure. The role includes writing up reports, something of interest to EBF and its members.

Research from ALTER-EU already identified TAXUD as one of the worst offenders in creating corporate-dominated expert groups, inviting the foxes to guard the hen house. Indeed, seven5 of the experts now participating in the AEFI were involved in the Commission's corporate-dominated expert group on taxation of savings. The group's intention was to clamp down on the use of off-shore tax havens, but it fell well-short of its goals as many of the members were actively campaigning against further regulation. The AEFI appears to be falling into a similar trap, inviting the same banks and their lobby groups responsible for maintaining bank secrecy to help advise on ending it.

But the Commission's DG TAXUD is not alone in bringing the same lobbies fighting against regulation to take part in writing it. Unbalanced and non-transparent expert groups are found throughout the European Commission, particularly in areas of high political and economic importance. This led the European Parliament to vote to freeze the expert groups' budget for a second time in three years to pressure the Commission into acting.

But the most promising chance of fixing the groups once and for all is the on-going investigation by the European Ombudsman, Emily O'Reilly. In January she published a set of comprehensive recommendations which the European Commission had until today to respond to. However, the Commission has already asked for an extension, on top of the initial three months given. Despite some of the positive rhetoric coming from the likes of Frans Timmermans, the First Vice President who is responsible for the issue, the Commission is following the same pattern of obfuscation and delaying tactics it has deployed for the last six years. In the meantime, business as usual continues as new non-transparent and industry-dominated groups are created, further enhancing the privileged role enjoyed by big business in Brussels. The new deadline is 31 May, but if the Timmermans and the Commission wants the Parliament and Ombudsman to believe it is taking the issue seriously, then it must provide a fully-detailed response as to how and when it is going to implement all the recommendations outlined by O'Reilly, ensuring new legally-binding rules that cover all DGs are put in place to tackle the problem now and for the foreseeable future.

2Barclays is a known member of the Association of Financial Markets; the British Bankers Association; the French Banking Federation; the International Swaps and Derivatives Association; and, the Investment Management Association.

3Insurance Europe and the Luxembourg Bankers Association do not have a listed expert. The only information on this is found in the meeting minutes.

European Citizens' Initiative against front companies
Transparency For All