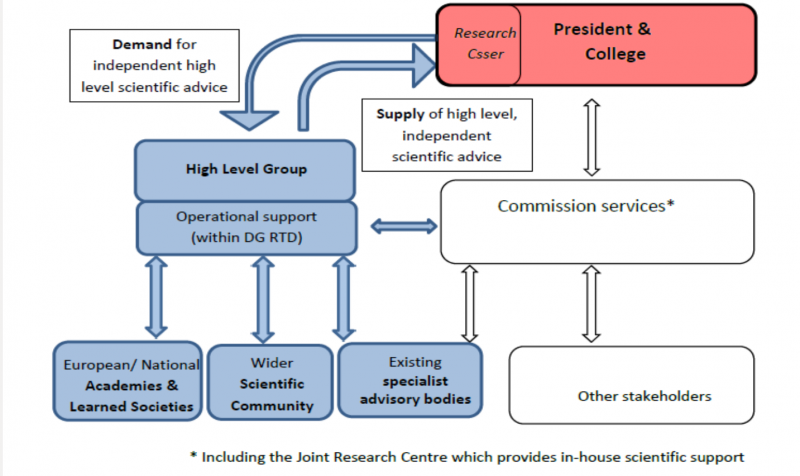 After many months of suspense, the European Commission annouced today that it was going to create a new High Level Advisory Group to replace the now defunct Chief Scientific Advisor to the President of the European Commission. Little is known yet about the proposal beyond this presentation, but here are nevertheless some comments.

The decision by the Commission to replace the CSA position with a committee is in itself progress from an independence perspective, as it is harder to influence a committee than an individual and it will avoid creating the problematic symbolic power of a "science chief". Statements about the need for this structure to be interdisciplinary and transparent are also welcome.

But of course much remains to be seen:

- In general, independence is not defined in the Commission proposal for this "independent advice": independence from whom, and in which context?

- The same goes for transparency: it is crucial that the advice delivered is made public, together with the request it is responding to as well as the supporting data;

- Interdisciplinarity is also very important, but a key criteria should be that only active scientists (that is to say scientists with recent scientific publications in the peer-reviewed scientific literature) are appointed. For the moment, criteria for appointing the members of the High Level Group are not known;

- The coordination between this new structure and the EU's in-house scientific expertise bodies will be crucial to avoid the worst flaws of the former position (the CSA was used as a shortcut by lobby groups to bypass these), and little details are known - it is very strange that EU agencies such as EMA, ECHA or EFSA are not even mentioned despite their essential role in producing scientific assessments for EU authorities. Possible disagreements between the various bodies, or minority opinions, should be acknowledged and made public;

- The insistence on the link with national academies and learned societies is good, provided similar independence requirements apply to these groups;

- This group will work following requests by the Commission. It is very important the Commission publishes these requests, and justifies their wording;

- It is unclear whether this group will report directly to the Commission's President as did the CSA or to the Research Commissioner;

- The resources allocated to this group are currently not known, however this is a really important point: the discrepancy between the CSA's mandate and its available resources was a major problem.