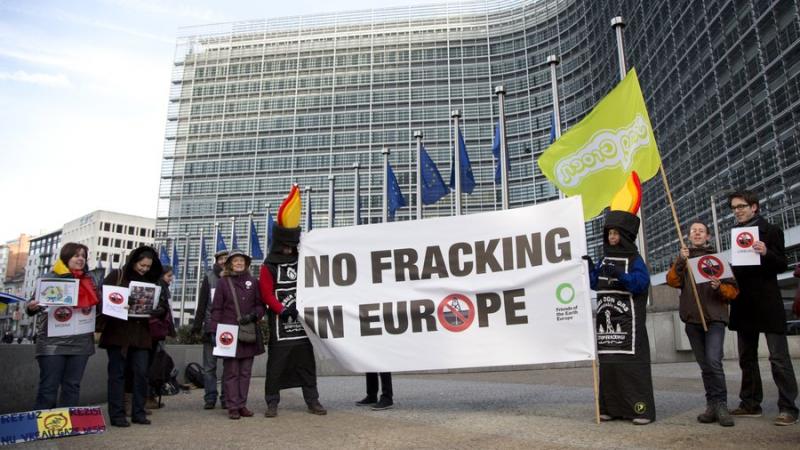 The European Ombudsman has opened a case on the European Commission's industry-dominated Expert Group on the risky and dangerous practice of 'fracking for natural gas.

Despite massive public opposition to 'fracking, the Commission established the 'European Science and Technology Network on Unconventional Hydrocarbon Extraction' with a mandate to recommend the most appropriate fracking techniques and technologies for Europe.

However, research by Corporate Europe Observatory and Friends of the Earth Europe shows that of the network's members who do not work for the Commission, more than 70% either represent or have direct financial links to the fracking industry, while all four chairs and co-chairs of working groups are fracking proponents and have even lobbied against tougher regulations.

Putting such vested interests in charge of deeming which fracking techniques are most 'appropriate' for the EU is only going to serve the interests of a floundering industry, not the 500 million Europeans who will have to suffer the consequences.

The Ombudsman's investigation, announced over the summer, follows a complaint by Corporate Europe Observatory and Friends of the Earth Europe, which calls on the Expert Group to follow the Commission rules for balance and conflict of interest.

However, the Commission denies the network is an Expert Group, despite its clear advisory role, and dismisses any worry with regards to balance. If the groups is not formally recognised as an Expert Group and made to conform to the existing rules, then both organisations have called for it to be scrapped.

Industry-domination of Expert Groups has been an on-going problem which the European Commission has been reluctant to tackle, leading the Ombudsman to launch her own investigation into the issue. The Commission has already responded to the preliminary findings, but the final recommendations are expected soon.

The Ombudsman has given the Commission until the 30th November to respond, the same day that this year's UN climate talks are set to begin in Paris.

The EU is presenting itself as a climate hero on the international stage, but this is one of many recent examples underlining the excessive influence of big polluters over policy.

CEO will be working between now and this December's climate talks to expose this cosy relationship and fight to kick big polluters out of climate policy and of the climate talks.

It is always the same problem with the selection of experts as members of expert groups. You will find experts in the related industry, in research institutes, in universities and a very few, some times in NGOs. Both sides, as well industry as NGOs will try to lobby those groups, so it it importand that not one of the lobbygroups is dominant. Regarding the financial relationsship to the industry, we have to consider that many public financed research projects ask for privat co-financing. This means that nearly 100% of independent researchers and experts prom public institutions and universities have worked in those jointly financed projects. If you call the all as 'industry dependent' you will never find real experts for expert groups. As a consequence, those groups will be dominated by the self-made experts of NGOs. NGOs are usually financed by members and small sponsors. As a consequece NGOs have to be populistic to a very high degree, they have to follow the main stream public meaning which is made by the media. In a scientific or technically compex topic not specially educated people can not have an independent own oppinion. For agitators it's much easier to turn the public oppinion to negativ than to positiv. The usual position is: no change.

I am not an expert on this subject but from the American experience, there is evidence that legislation and the infrastructure didn`t keep up with the pace of development that resulted in significant environmental problems and risks to health. In September 2012, the Commission released three studies on shale gas, as part of its information gathering process and as background for decisions on possible next steps. One study entitled, "Potential Risks for the Environment and Human Health Arising from Hydrocarbons Operations Involving Hyrdraulic Fracturing in Europe",by AEA Technology indicated that although HF can be regarded as a new technology, the EU had not created a special directive to control fracking and the current directives are inadequate.
http://ec.europa.eu/environment/integration/energy/uff_studies_en.htm