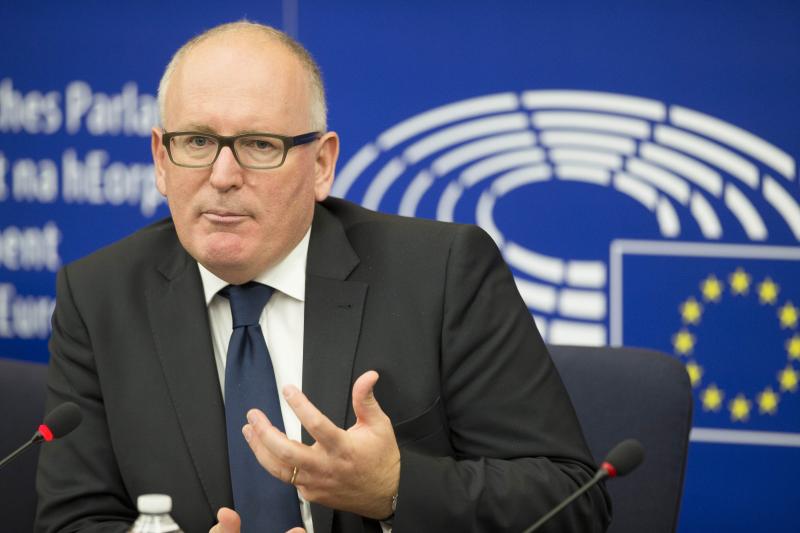 Fate of Commission advisory groups in the hands of Frans Timmermans

It's make or break for the European Commission's advisory groups, known formally as Expert Groups. First Vice President Frans Timmermans, the man in charge of transparency, plans to bring out new horizontal rules to make the groups more balanced and more accountable in a matter of weeks, but will he listen to the concerns of the public?

New cross-cutting horizontal rules have been a long-standing demand of ALTER-EU and allies, as well as the European Parliament and the European Ombudsman, and such an opportunity will not come around again in the near future. But will Timmermans do what's necessary and take on board the proposals made by civil society in their recent meeting and further elaborated in the follow-up letter below?

The meeting was requested by Timmermans himself following an initial open letter from a group of civil society organisations calling for a public consultation on the proposed horizontal rules. There was a concern that the important process of drafting new rules was being done behind closed doors, excluding not just civil society but also the European Parliament and the European Ombudsman. Both were involved in conducting their own inquiries into the problematic groups, which are essential in advising the Commission at the early stages of legislating but have traditionally been dominated by corporate lobbyists as well as being notoriously untransparent. Both were preparing to present their final conclusions on what changes needed to be made to the groups.

The sudden urgency to publish the new rules before either inquiry was finished (despite this issue having previously dragged on for years), effectively voided conclusions from both the European Parliament and the Ombudsman, while civil society would have no voice at all. In the end the Timmermans opted to bilaterally engage with all parties: a deal was made with the MEP responsible for the European Parliament report, Dennis De Jong, to include his proposed changes; discussions were entered into with the Ombudsman; civil society groups calling for a public consultation were invited for a meeting.

The meeting was constructive – although it was made clear that it was no substitute for a public consultation – with what felt like genuine interest in the proposals made by civil society on issues such as balance, conflicts of interest, transparency and enforcement (see the follow-up letter below). But it is to be seen whether this translates into stronger and more effective rules – or whether we're in for another 8 years campaigning against the corporate domination of the Commission's main source of advice when drawing up legislation. Only time will tell.

Re: follow-up to meeting on the rules of procedure for the European Commission's Expert Groups

As agreed during our meeting on Thursday 7th April, those in attendance have compiled a short summary of the key points raised, in order to help the identification of practical solutions to improve the rules of procedure on Expert Groups.

Public consultation: given the importance of Expert Groups both to the Commission but also to stakeholders, a public consultation remains the most appropriate way to ensure all views are captured, as well ensuring the robustness of the new rules. Such an approach has proven an important part of the Commission’s Better Regulation agenda.

Balance: to ensure the Commission receives high quality advice that reflects the public interest, the sum total of Type B and Type C membership within groups should be balanced between economic and non-economic actors, with no dominance by one interest group among actors (something already practised in many groups). The definition of interests and the number of seats they will receive should be outlined in the call for applications, with deviation from this principle meriting justification. Where such a balance is justified as not possible and/or practical, for instance because there is a need for more technical expertise from specific economic stakeholders, the Commission can still ensure high quality public interest expertise by limiting the key roles of report drafting and voting (on content and procedure) to a smaller group which reflects the balance between economic and non-economic interests. To give an example: an expert group might be composed with 20 representatives from economic interests and only 10 from non-economic interests. In such a case, voting and report writing would be done by a groups of 10 economic and 10 non-economic actors, while the role of the other 10 economic actors would be to provide technical expertise. This ensures an “equality in arms” between various interest groups, and that consensus finding is not determined by whichever interest holds a majority of seats.

Conflicts of interest with mandate and role of the Expert Group: the definition of a conflict of interest should not be limited to individuals in a personal capacity, but relate to whether a stakeholder or chair can be expected to fulfil the mandate of the Expert Group in working towards the public interest goals set in the relevant legislation establishing the group, policy framework and Treaty provisions [foot note: In particular Articles 15(1) TFEU and 1(2), 11(2) and 17(1) of the TEU]. Deciding composition and/or chairing of groups must ensure an appropriate distance is kept between regulated industries and the formal advice resulting from the group (for example from the tobacco industry on tobacco control, the car industry on reducing air pollution, operators of industrial installations on emissions standards or trust funds on tax evasion). Finally, the enforcement of these rules is essential through regular reviews, with misconduct leading to sanctions, including suspension from the group.

Transparency: it should be possible to attribute recommendations or opposition to certain proposals to the different members of Expert Groups (including the Commission and Member States), and therefore written inputs, policy papers and members’ deliberations should follow the principle of “transparency by default” (a qualified majority can partially or temporarily allow anonymity, if the group is balanced). Disclosure should be underpinned by a robust definition of “meaningful and complete”, while minority opinions should be recorded if they exist, not just on-demand. Such measures should also extend to the Comitology Committees and any advisory group assembled by the Commission.

Enforcement: measures introduced through the new horizontal Rules of Procedure will only raise the effectiveness of Expert Groups if enforced, entailing extra resources to monitor, rectify and sanction where necessary. This should be matched by a commitment to ensure the rules cover all advisory groups, preventing DGs from creating pseudo-Expert Groups that can escape the new rules on a technicality, such as the network on unconventional hydrocarbon extraction. To further increase transparency and confidence, an annual audit of Commission Expert Groups and how DGs have implemented the new measures, as well as if they now meet the aspirations of the Commission to be ‘accountable and more balanced’, should be carried out. Such ‘State of Play’ exercises were conducted in 2012 after the first budget reserve was imposed by the European Parliament.

Timetable: in order to ensure that the proposed changes are successfully implemented, and in order to give stakeholders confidence in the commitment to change, a clear timetable with appropriate milestones should be published alongside the new rules. It is unfortunate that many of the proposed changes, such as linking the Expert Group and Transparency registers, introducing a conflict of interest policy, or having open calls for applications as default, were already agreed and announced by the previous Commission back in June 2013 but were not given a timeframe and never materialised.

We hope that we have helped to further clarify the necessary changes that could greatly improve the functioning of Expert Groups, but again stress that in order to bring the full wealth of expertise held by those stakeholders who have direct working knowledge of the groups and how they can be improved, a public consultation would be necessary.