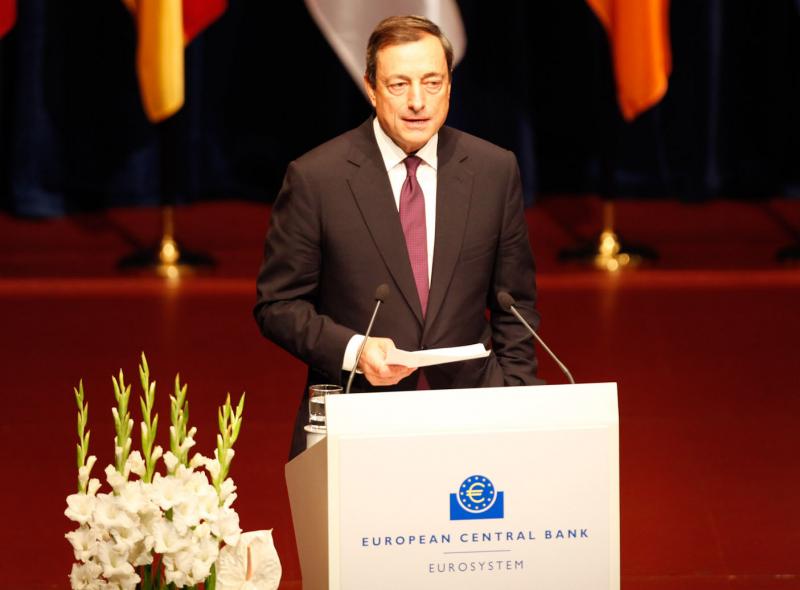 Is it right that central bankers should be members of lobby groups or think tanks where they meet with the chief executives of big private banks to produce advice on banking regulation for the rest of the world? Is it a problem if bankers walk back and forth between public and private office?

The new president of the European Central Bank should withdraw immediately from financial lobby groups.

[A French translation of this article is available here]

Draghi is a former vice chairman of Goldman Sachs International, but he’s also a member of an elite  international banking community club, the Group of Thirty, as is Trichet.

The Group of Thirty is a body of “very senior representatives of the private and public sectors and academia” set up in 1978 to “explore the international repercussions of decisions taken in the public and private sectors, and to examine the choices available to market practitioners and policymakers”1.

Given the eurocrisis, the huge bailout operations of big banks, and the ongoing debate on how to regulate banks in the light of the financial crisis, it should be obvious that safeguards are needed to ensure that the President of the European Central Bank remains independent. He should not be mixed up in any way in lobbying activities to defend the interests of private banks. Shouldn’t that include a ban against membership of a club like the Group of Thirty?

Trichet and Draghi share the club with chief executives from the biggest of the biggest banks. The group is chaired by Jacob Frenkel of JP Morgan Chase who often acts as the group’s public face. Other members include E. Gerald Corrigan of Goldman Sachs, Guillermo de la Dehesa Romero of Grupo Santander, David Walker of Morgan Stanley and a substantial number of central bankers from all over the world 2.

A close friend of Trichet, Jacques de Larosière, is also a member. He is perhaps best known as the banker who chaired the high level group of the EU in 2008-2009 to advise on the response to the financial crisis, and who shortly after joined the IIF and helped it in its effort to water down the agreement on new international banking regulation, Basel III – about to be implemented in the European Union 3.

While Trichet was happy to share details of his medals and the honours he has received in the course of a long life on the ECB’s website, his membership of the Group of Thirty was strangely omitted.4

According to academics who have analysed the role of the Group of Thirty, the group has all the characteristics of a lobby group. It’s described as a “private sector organisation with considerable influence in the outcome of some of the regulatory debates of the past two decades” 5.

“It’s a fairly unique creature in that it has people from both the private and public financial sector as members, and that it’s done in the open,” Eleni Tsingou of Copenhagen Business School who has studied the group for many years, told CEO.

“It’s different today after the financial crisis, but for much of its lifetime, the Group of Thirty operated in an environment where no one saw any problem in a close relationship between regulators and the private financial community when new rules were under consideration.”

She emphasised that the group’s work falls in two parts.

“The group works in two different ways. There’s the public work with reports, and there are the meetings of the members, where they can meet and discuss in a confidential environment. So it has a club-like character.”6

The group itself says it “impacts the current and future structure of the global financial system by delivering actionable recommendations directly to the private and public policymaking communities”. This considerable influence seems to have included the Basel II banking regulation that failed so miserably in 2008. When negotiating Basel II, the Group of Thirty supported the biggest lobby group in the field, the IIF, to promote a system of risk management called value-at-risk (VaR).7 A system later blamed for many of the calamities in the financial crisis in 2008.

“Given the calamity that has since occurred, there has been a great deal of talk, even in quant circles, that this widespread institutional reliance on VaR was a terrible mistake. At the very least, the risks that VaR measured did not include the biggest risk of all: the possibility of a financial meltdown,” the New York Times wrote in early 2009.8

The group’s membership hasn’t changed much over the years and there’s little reason to believe that the group’s role is any different. So when Draghi takes his place in the chair of the president of the European Central Bank, his independence should be questioned.

The independence of the European Central Bank has been a particular feature of the institution from the beginning. As stated in article 130 in the Treaty:
“Neither the ECB nor the national central banks (NCBs), nor any member of their decision-making bodies, are allowed to seek or take instructions from EU institutions or bodies, from any government of an EU Member State or from any other body.”
This is taken very seriously when member states try to influence the decisions of the Bank. But why no one seems to have asked whether private lobby groups could have undue influence on the top layer of the Bank, is puzzling.

During the debate on the selection of the new president, Draghi’s former employment with Goldman Sachs was raised and questions were asked as to whether it could represent a problem. To some amazement if not amusement, friends of Draghi claimed that his role as vice chairman of Goldman Sachs International was merely that of an advisor.9 Draghi left his post at Goldman Sachs six years ago. Now that he has become president of the ECB, the Group of Thirty can still count on Draghi and his name when they work to influence financial regulation. If or when the Group of Thirty’s name is used to strengthen the hand of the financial lobby, Draghi’s name would be implicitly connected such efforts.
Draghi should step back from the Group of Thirty as a show of will to open up a new chapter in the ECB’s history. One where the revolving door between central and private bankers doesn’t turn as easily as it does today. It is unacceptable for the president of a presumably independent public institution to be member of a group that has promoted private financial sector interests.