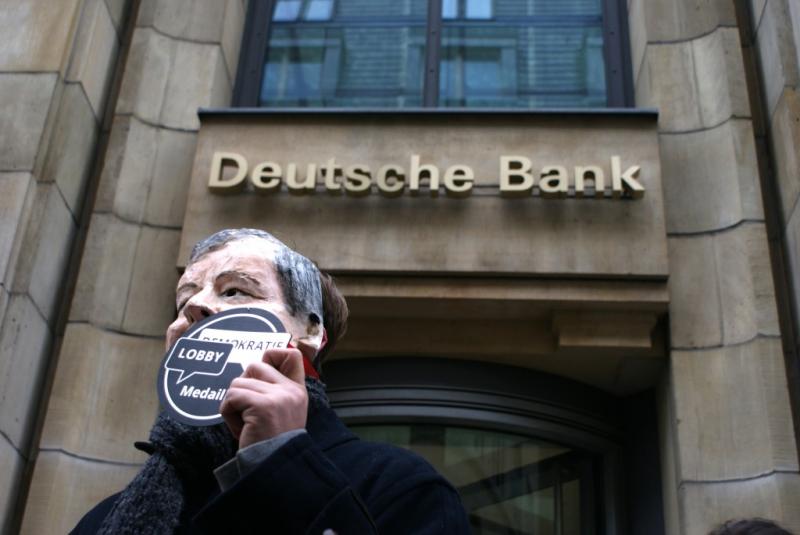 What are bankers doing inside EU summits?

[A French translation of this article is available here]

At the Euro Summits in July and October 20111, crucial decisions “to save the Euro” and “to save Greece” were made. It was agreed to restructure Greek debts and banks were asked to accept a 'haircut' to their profits to avoid a Greek default and the risk that some banks might default as a result. In Summer 2011, the press was full of stories about the informal negotiations between EU leaders and the banks about the level of private sector involvement in restructuring Greece's debts.

The Institute of International Finance (IIF), a lobby group established in 1983 by the biggest banks and financial institutions in the world to deal with the question of sovereign debt2, became the EU's interlocutor on the Greek debt issue. Its proposals -described as ''offers''- received red carpet treatment.

IIF's president at the time, Josef Ackermann (Deutsche Bank), made sure he was in Brussels for the July Summit to defend the financial sector's interests. The IIF's general director Charles Dallara, was also reported to have met with more than one government leader at the Euro Summit suggesting that the IIF was involved in the negotiations right up until the last minute.

The politicians were supposed to be taking some big decisions, but apparently the banks had their say too. What exactly was the role of IIF?

To get a clearer picture, Corporate Europe Observatory (CEO) requested access3 to the minutes and notes of the meetings of European Council representatives with the IIF in relation to the summits, as well as to the documents submitted by this lobby group. To our surprise, the European Council stated in its response4 that contacts with representatives of the International Institute of Finance “before, during and after” the summits consisted only of “discussions between one Member State, namely Greece and private investors holding Greek bonds, to the degree that they are represented by the IIF”. The Council, in other words, claims that the IIF did not have meetings with any other EU governments during the EU summits, except for Greece.

The Council told CEO that these discussions were also attended by Troika representatives (i.e., from the European Commission, the European Central Bank and the International Monetary Fund), as well as by the president of the Economic and Financial Committee5, Vittorio Grilli. This person was responsible of informing the Euro Summits about the discussions with the IIF that had taken place before.

However, it is very difficult to believe that there was no contact beyond that. As the media reports and some documents consulted suggest, the reality was very different. CEO has sent a complaint regarding the European Council's response and requested an internal review.

News reports from before the start of July summit refer to a document signed by the IIF, dated 10 July and “delivered to European finance ministers”6. In this draft paper, the lobby group said Euro zone countries and the IMF needed to show they could deliver a rescue plan for Greece, including a debt buyback. It is more than probable that this document influenced the final decisions adopted by the Head of States.

On the IIF website, details of their “offer for Greece”7 were published on the same day that they were adopted by the Summit. The document refers to “a context of a broader set of understandings reached with the European Union”.

When questioned by German non-profit watchdog organisation LobbyControl in October 20118, the IIF said that it “had sought to facilitate discussions between a wide array of private investors, including non-member IIF firms, and the official sector, including EU officials, the European Central Bank and the IMF. The role of facilitating the appropriate interchange of views between private creditors to Greece and official creditors was pursued at the behest and in the full knowledge of the Greek Government”.

This statement makes it clear that the IIF also met with Greece's “official creditors” (as opposed to private creditors) i.e. the other Euro zone governments. IIF states explicitly that “Mr. Dallara and an IIF team had extensive meetings with very senior European government officials over several weeks”. Yet the Council claimed in its response to CEO that only the Greek government had met with the IIF.

In its response to LobbyControl, the IIF did not deny the involvement of three of its representatives (Ackerman, Dallara and Baudouin Prot) in encounters with a range of EU officials, but said: “They did not participate directly in the meeting of heads of state”. EurActiv and EuxTV, nevertheless, reported9 that Joseph Ackerman visited the European Council on the occasion of the July Summit.

Contacts were also reported after the summit. The Greek media mentioned a conference call involving Dallara, with top EU officials, such as Eurogroup chair Jean-Claude Juncker and European Commissioner Olli Rehn, in which the implementation of the July summit decisions were discussed10.

And Dallara's name appears again in media coverage of the Euro summits in October, when, according to media reports, there were two brief encounters in the office of Council President Herman Van Rompuy. The President of France, Nicolas Sarkozy, the President of Germany, Angela Merkel, and the representatives of the banks were also present. These encounters were described as crucial and decisive for the outcomes of the summits11.

Bloomberg reported that ''Europe’s leaders took the unusual step of summoning the banks’ representative, managing director Charles Dallara of the Institute of International Finance, into the summit to break the deadlock over how to cut Greece’s debt. Dallara squared off with a group led by Merkel and Sarkozy around midnight after issuing an e-mailed statement that “there is no agreement on any element of a deal”. According to Bloomberg, Sarkozy said the bankers were escorted in “not to negotiate, but to inform them on decisions taken by the 17"12.

After the October deal, on 15 November a new conference call on the implementation of the deal was reported in the Greek media involving the Greek finance minister Evangelos Venizelos, Commisioner Rehn and Dallara13.

In a document circulated in September14 the IIF reported that its task force on Greece (made up of the banks exposed to the Greek debt) held - before the July Summit - several meetings with the Eurogroup Working Group15, including senior officials from Euro countries and European institutions, headed by Vittorio Grilli. And this document says: “The elements of a possible approach to the private sector involvement were developed and were finally agreed with key Euro Area and Greek officials, and eventually with the heads of the Euro Area states or governments and EU institutions or IMF at their meeting of July 21, following negotiations led by IIF board chairman Josef Ackermann”.

Who is winning the game?

According to that document, the IIF financing offer “played a catalytic role in facilitating the July 21 agreement and forms an integral part of a comprehensive package in support of Greece announced by the Euro Area Heads of State or Government and EU Institutions on July 21, 2011 in Brussels”.

As can be guessed, if the outcome was rooted in the banks' offer, it was likely to be favorable for the financial sector. Indeed some experts have underlined how the banks gained from the deal. “If you look at the 21% and our demand for a 50% participation of private creditors, the financial sector has been very successful,” the German government's economic advisor, Wolfgang Franz commented16.

In October, the banks had to recognise that their supposed solution was not enough and a 50% haircut was needed. But unlike in July, they failed to agree the technical details of this deal with the EU. These have to be agreed in negotiations with the Greek government and the result is likely to be again favorable for the financial sector.

The creditors will be reimbursed for 50% of the nominal value of the Greek bonds, whose real price in the secondary market is around 36% of their face value17. Foreign creditor banks will receive the equivalent (35% or 70 billion Euros) of today's real value of their bonds (which otherwise would continue to fall) in new 20- and 30-year guaranteed bonds. The banks will exchange today's ''junk bonds'' with AAA rated bonds. On top of that they will receive 15% (or 30 billion) in cash18.

In this way the banks will not only avoid the uncontrollable domino effect triggered by a Greek default, they will also gain 30 billion Euros in real terms. Greek banks will receive around 30 Euro additional billion from the new bail out package19. All this money will be paid by tax payers in Euro zone member states through the Financial Stability Mechanism. Banks get a good deal, but Greece remains in debt. Member states pay the price instead of banks.

These tough conditions contributed to increase the pressure to the elected Greek government that finally had to resign and was replaced by Loukas Papademos, the former vice-president of the European Central Bank (ECB). Negotiations on how to implement public sector involvement (PSI) as envisaged by October Summit continue during January.

The omnipresence of the big banks' representatives wherever decisions are being taken and the ease with which they access decision makers explains how the final outcomes of these summits are influenced by the power of Ackermann and his friends, and consequently favour them.

Deutsche Bank and its president, Ackermann, were in December “awarded” the Lobbykratie Medaille20, an award hosted by LobbyControl that intends to put undemocratic lobbying in the spotlight. They won the embarrassing award for their lobbying campaign with the IIF to secure favourable conditions for the financial sector in the Greek debt crisis, while misleadingly pretending to be badly impacted by the result21.

The banks, whose irresponsible lending practices are among the causes of the crisis, now appear to be dictating the terms of the solution for their own benefit. In other words, instead of revising the monetary system and sanctioning irresponsible banks, the EU invites them to determine a way out of the mess they have created.