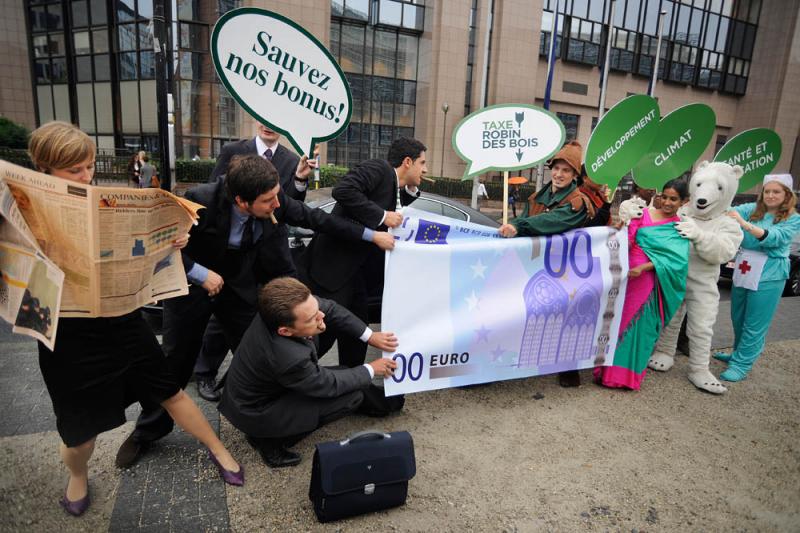 Lobbying to kill off Robin Hood

Big banks and financial companies are doing their best to stop the introduction of a financial transaction tax (FTT) in the European Union. A proposal for an FTT is on the table, but still has to be approved by the Council. The industry has put all its lobbying machinery to work, implementing a scaremongering strategy, to convince member states to reject the tax. There is a real risk that their lobbying will pay off, either by defeating the entire idea of taxing transactions, or by watering down an already timid proposal.

A financial transactions tax, commonly dubbed a “Robin Hood tax”, is a simple tax on all  financial transactions. Since the ATTAC-movement and the tax justice movement picked up the issue more than a decade ago, the popularity of the idea has grown steadily. It now looks as though it might be possible to introduce such a tax in a large area in Europe. Many groups have called for such a tax to be introduced at a global level in order to collect money for development or for the fight against climate change.

The EU's proposal does not have such global ambitions, but is  intended  to discourage speculation and create a new revenue stream. At a time when citizens are keen for the financial sector to contribute to the costs of the crisis, some European leaders have started to push for an FTT at an EU level. The European Parliament has also pledged its support and the Commission, which was previously reluctant, has finally put a proposal on the table.

Throughout all this process, big banks and financial companies have been lobbying hard to try to stop the FTT or at least water it down. There is a lot of money at stake, so they are using all their tools: privileged access to the political powers, threats to relocate, scaremongering and the selective use of data... And although it may seem that they are losing the battle, the war is not over yet.  The FTT still needs to be approved by the Council.

The industry has been lobbying, not only in the EU, but also at the national level, to convince member states to reject a financial transactions tax. Some governments have already declared whose side they are. The UK  stated early on that it would veto the proposals and Sweden  is also opposed. Some Eurozone countries, such as Ireland  and The Netherlands are also reluctant, while France and Germany have become its main champions, and together with seven other EU countries, including Spain, Belgium and Greece, have signed a letter to the Danish EU presidency in support.

Nothing has yet been decided, but with this division it seems unlikely that an agreement will be reached, either at the EU or at the Eurozone level. Some voices are already calling for alternatives and it is becoming more and more likely that a watered down tax may be put forward, perhaps a little like the stamp duty reserve tax in the UK, which is a tax on shares, but not a real transaction tax. Campaigners say this would be a lost opportunity to make real change in order to curb speculation and regulate a dangerously deregulated financial sector which led the EU to the current crisis.

Read the full report below.