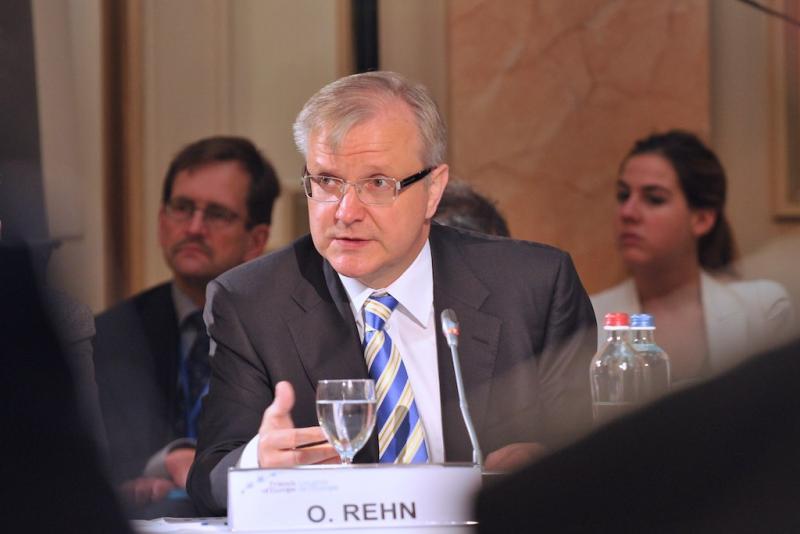 What was discussed during Commissioner Rehn's meetings with Goldman Sachs? Euro Commissioner has a transparency problem.

Since the start of the eurocrisis, the European Commission has gained significant new powers to monitor and intervene in government budgets at a member-state level in the name of ‘economic governance’. At the same time, as a member of the Troika (with the International Monetary Fund and the European Central Bank), the Commission has prescribed controversial austerity and privatisation programmes for Greece, Portugal and Ireland. Many of these powers sit in the hands of the Commission’s Directorate-General for Economic and Financial Affairs (DG ECFIN) and Commissioner Olli Rehn. But power must be accountable. And while they’re more powerful than ever, their appetite for transparency appears very limited.

In February this year I set out to find out more about who Commissioner Rehn has been consulting with about the Commission’s eurocrisis policies, including the Troika programmes. I submitted an online request for access to all the correspondence and minutes of meetings between Commissioner Rehn, his cabinet and DG ECFIN staff and private sector companies and lobby groups. The EU’s transparency regulation gives the Commission three weeks to reply to such requests, but it took three months and several reminders before I got a very limited response. This provided short notes of a small number of meetings between the Troika and banks and companies in Ireland. There was nothing about Greece or Portugal, or about meetings outside the context of the Troika.

I asked the Commission to do another search covering the full range of documents I had requested. Another three months later – and after several further reminders – I finally received an envelope with 44 documents, relating to Rehn and his cabinet. The Commission said a response from DG ECFIN would follow. Five weeks later this still hasn’t arrived.

Forty four documents might sound like a lot, but 43 of these concerned correspondence about companies and lobby groups wanting to meet with Rehn. These included Goldman Sachs, KBC, BBVA, Moody’s and Mason Capital Management, as well as the European Banking Federation. There was only one letter of substance (from the trade union federation ETUC expressing its concerns about the Troika imposing harsh austerity measures), but no reply from Rehn. Didn’t Rehn receive any other letters about the EU’s policies on the crisis? There was at least one from NGOs (co-signed by Corporate Europe Observatory) about privatisation imposed by the Troika on Greece and Portugal. Four months later, the NGOs are still waiting for a response.

Apart from the missing documents, there are two other big problems with the 43 emails and letters released by Rehn’s cabinet. Firstly, many names of lobbyists are crossed out with a thick black pen. The Commissions claims that crossing out these names is “compliant with the rules on personal data protection”. But those who asked for meetings with Vice-President Rehn did not do this in a personal capacity, but as employed staff of companies or lobby groups aiming to influence EU decision-making. There is therefore no justification for keeping these names secret. Secondly, the Commission states that “no minutes were drafted for any of these meetings” with lobbyists. Rehn appears to have had at least three meetings during the last 12 months with Goldman Sachs’ heavyweights such as Lloyd Blankfein and Richard Gnodde. Yet no notes were taken? At other Commission DGs, such as DG Trade, note-taking is standard procedure, so it would be rather unusual if this was the case. 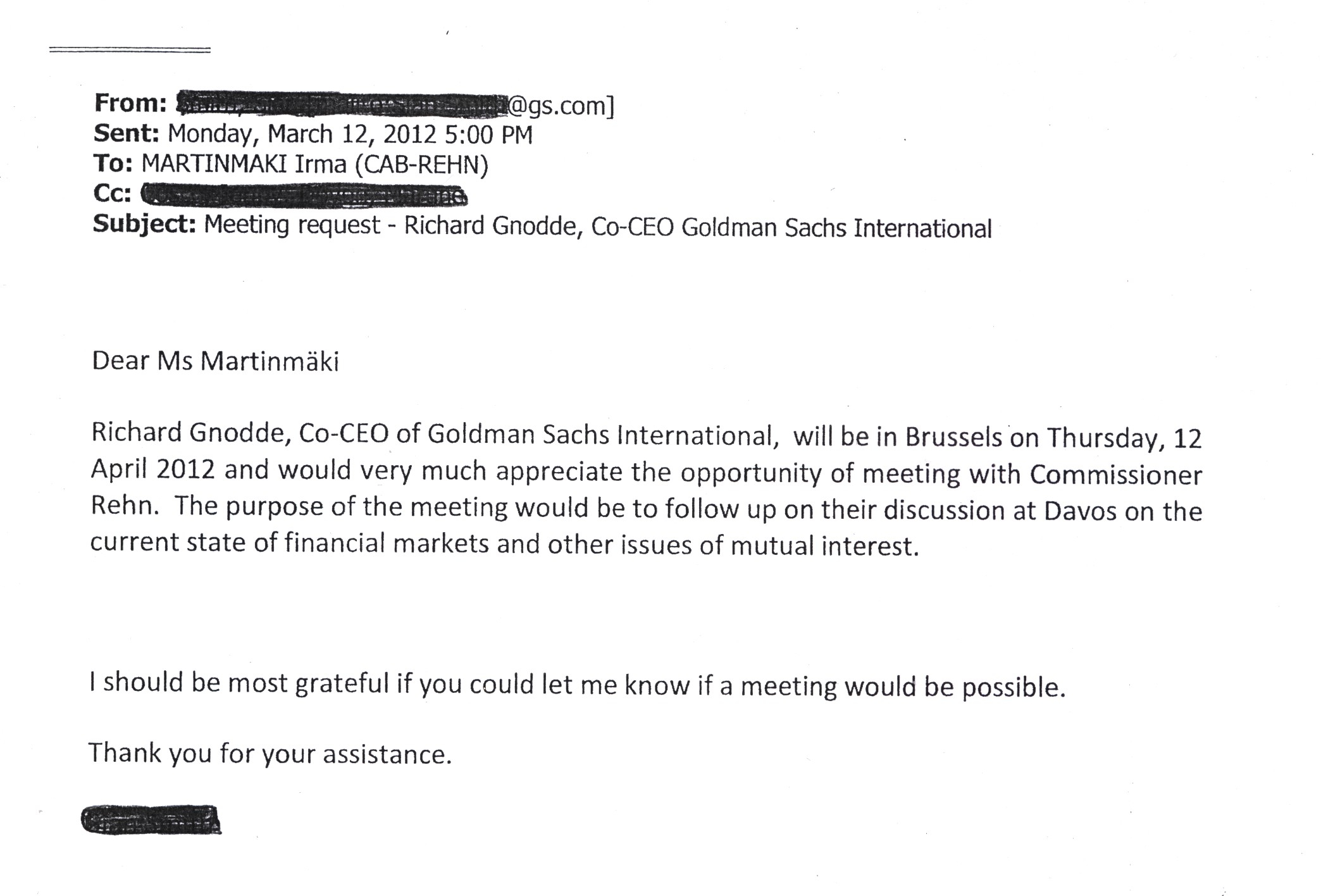 This whole experience suggests that transparency is not a priority for Commissioner Rehn or for DG ECFIN. Inadequate, delayed responses to requests for access to documents is a violation of the EU’s Regulation 1049/2001. The Commission, not least in the light of the new powers it has gained, should fully respect its own rules – and it should do more than that.

Commissioner Rehn’s website does not list his meetings (there is only a diary for that particular week). It is high time the European Commission embraced a policy of pro-active transparency by posting lists of meetings with lobbyists on its website. This would be a crucial step towards securing the citizens’ right to know. It would also save watchdogs, journalists and others engaging in access-to-documents requests, as well as the Commission itself, a lot of time and energy. The UK Government has been doing this for several years: a list of meetings with lobbyists is made available per government department, updated quarterly.