A group of MEPs from all the main European parties have jointly signed a written Parliamentary Question, asking EU Commissioner Šemeta why he has packed his new Platform for Tax Good Governance - charged with tackling tax havens and dodgy tax practices - with organisations engaged in tax dodging, as well as their advisers.

It comes a day after the first meeting of the Platform - a type of 'expert group', brought together by DG Tax and Customs Union (TAXUD) and its Commissioner, Algirdas Šemeta. It also follows a letter of complaint submitted by CEO and allies, which outlines the serious conflict of interest among some members of the group and calls for their removal. To mark the occassion, campaigners in Brussels also staged a tropical stunt outside the Commisison building before the meeting started, pretending to be from the tax haven industry and thanking the Commission for all its support, which they hoped would continue with the new Platform (see more photos). 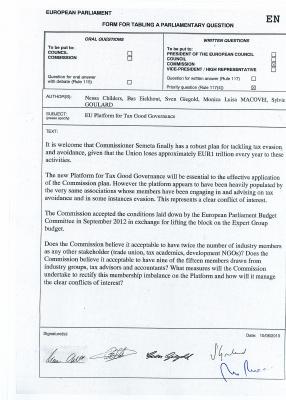 The full text of the PQ:

It is welcome that Commissioner Semeta finally has a robust plan for tackling tax evasion and avoidance, given that the Union loses approximately EUR1 trillion every year to these activities.

The new Platform for Tax Good Governance will be essential to the effective application of the Commission plan. However the platform appears to have been heavily populated by the very same associations whose members have been engaging in and advising on tax avoidance and in some instances evasion. This represents a clear conflict of interest.

The Commission accepted the conditions laid down by the European Parliament Budget Committee in September 2012 in exchange for lifting the block on the Expert Group budget.