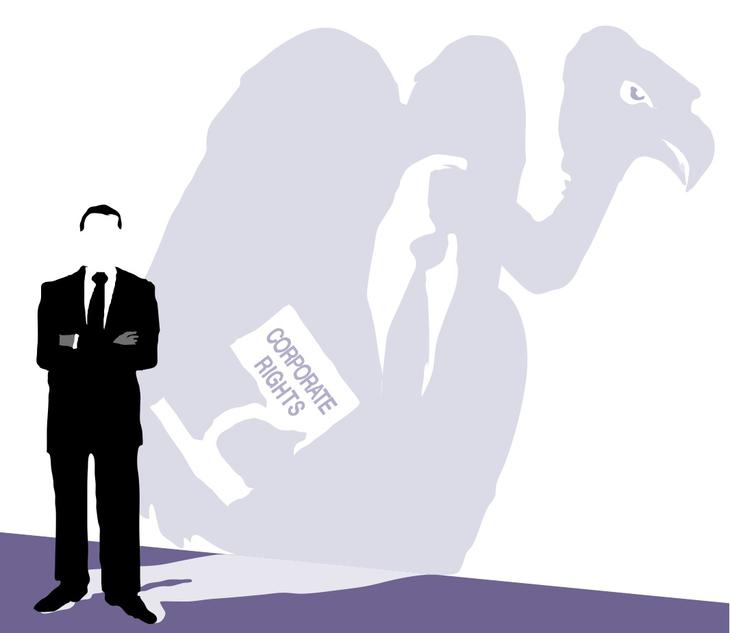 This summer Greece's financial authorities fined 20 hedge funds for speculating against the Greek economy. Now, the main global lobby group for hedge funds is trying to tweak the EU's rules so they can have a free play in the future.

Global hedge funds attacked Greek banks in the early part of 2015. These were the months when the Greek economy was particularly fragile and in danger in the aftermath of the change of government in January of that year. In the wake of years of continuing economic crisis and harsh austerity, the new government was battling with its creditors to get a new and better deal from the EU. In response to Greek intransigence and hesitance to sign up to austerity programmes, the European Central Bank issued regular threats that liquidity to Greek banks could be cut off.

At this point, 20 hedge funds – including JP Morgan Securities and Quantum Partners – moved in to do what they always do: speculate to make money. They sold Greek bank shares short, spreading doubt about the resilience of Greece's banking sector. Out of fear of an economic collapse, the Greek financial services authority (the Hellenic Capital Market Commission, HCMC) stepped in to stop them,  handing out fines to all 20 from €10,000 to €460,000.

In response, the financial lobby is now trying to avoid a repetition. The hedge funds’ lobby group AIMA (Alternative Investment Management Association) is now trying to blow a hole in the EU rules on “short selling” so they can escape similar blocks and sanctions in the future. This can be seen from documents obtained by Corporate Europe Observatory from the EU financial regulation agency ESMA (European Securities and Markets Authority).

The method used by the hedge funds is called 'naked short selling' and it is rather simple: when you do naked short selling, you borrow the shares and sell them quickly. That enacts a drop in the price, which allows you to buy the shares back at a lower price. You make a profit, but drop the company whose shares you are speculating against in trouble.
This is what the Greek authorities deemed the hedge funds had done to their banks. These hedge funds had acted as if they owned shares in a number of Greek banks, and sold them for a considerable sum. 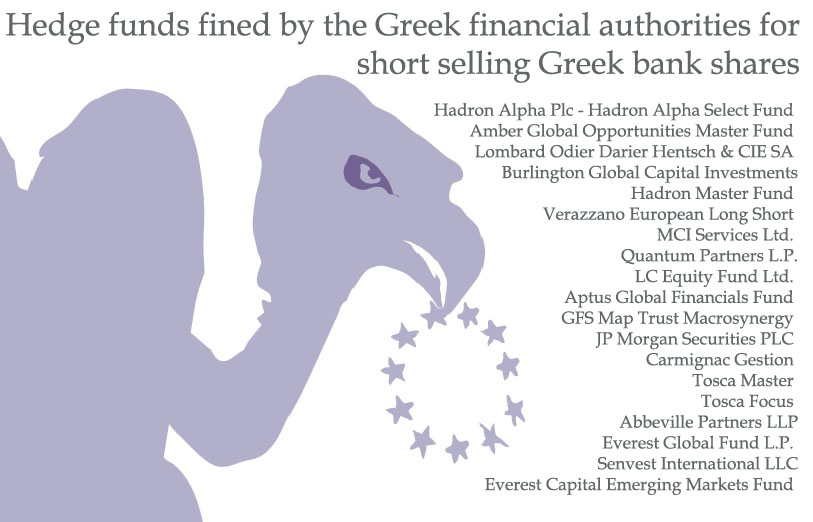 But there are rules about naked short selling at the EU level.  These say that naked short selling can be restricted if it puts financial stability at risk, which applies in the case of the Greek authorities' measures. It might sound as if such an emergency brake is available at need, but the European rules are not robust, and were never intended to put a stop to speculation as such. The regulation entitles hedge funds to apply many different methods to get a green light for short selling, and there are many loopholes that enable hedge funds to conduct naked short selling. One of them is the many ways in which you can claim you own or possess a share and are not just outright pretending. This is where AIMA has decided to push the European institutions and to try to blow a hole in the rules. Or as put to CEO by a former lobbyist for the hedge fund industry, they “are trying to get increase their options to speculate allowed within the SSR.”

“A cheap ticket to speculation”

In a letter AIMA raises doubts about the Greek Government's measures by claiming that in a way, the hedge funds did indeed own the shares: “According to the Short Selling Regulation [SSR], restrictions on uncovered short-sellling [ie naked short selling] apply to the sale of a share or debt instrument 'which the seller does not own at the time of entering into the agreement to sell' (SSR Article 2 (1)(b)). In the cases described in this letter, the entities in question sold shares they owned following participation in a rights issue and yet were found by the HCMC to have breached the SSR”.

So, this is AIMA’s argument: as the hedge funds participated in a “rights issue”, they owned the shares. So, what is a rights issue? And does AIMA's argument that “participation in a rights issue” amounts to ownership have credibility?
A rights issue is a guarantee from an issuer (could be a bank or another company), that if new shares are issued, you will be able to buy them. It is frequently used as a guarantee to shareholders that their share in the company will not be watered down by issuing new shares they cannot obtain. But possessing a rights issue does not make you the owner of extra shares, and you cannot use it to buy more shares unless shares are actually issued for sale. To claim that a rights issue equals ownership is creative at best. Essentially AIMA is looking for a loophole and using this as a way to make it easier for hedge funds to engage in naked short selling. This would enable them to avert the kind of bans imposed by the Greek financial authorities.

“The hedge funds are trying to get a cheap ticket to speculation”, a former lobbyist for the hedge fund industry told CEO.

The EU's Short Selling Regulation was adopted in 2012 after a lengthy and heated debate. It provides ample space for short selling, as ownership of a share is actually not a precondition: “alternative provisions resulting in similar legal effect” suffices. But the EU definition of what a “similar legal effect” is, has not included rights issues so far. Or rather, the definition of the coordinating EU agency, the European Securities Markets Authority has not directly addressed the issue. AIMA is asking ESMA to do exactly that, and argues that some member states do include “rights issues” in their definition of ownership.

So far, however, ESMA has approved the Greek measures. And the ESMA press office explains to CEO that thus far, the agency has not addressed the legal issues raised by AIMA. And for “rights issues” to become the cheap ticket to speculation across Europe, harmonization of the implementation of the rules across EU member states would be required – a demand tabled by AIMA years ago. But should ESMA decide in favour of the hedge funds – or if they are pressurized to do so - it would be a first step towards another big loophole for speculators.

If countries like Greece, whose population are already suffering the profound effects of a prolonged economic crisis, are to protect their economies from predatory short selling from global hedge funds the ESMA needs to firmly reject the financial lobbies' appeals, and instead use the occasion to consider how rules can be strengthened so hedge funds will not feel tempted to try another attack such as the one on the Greek banks.