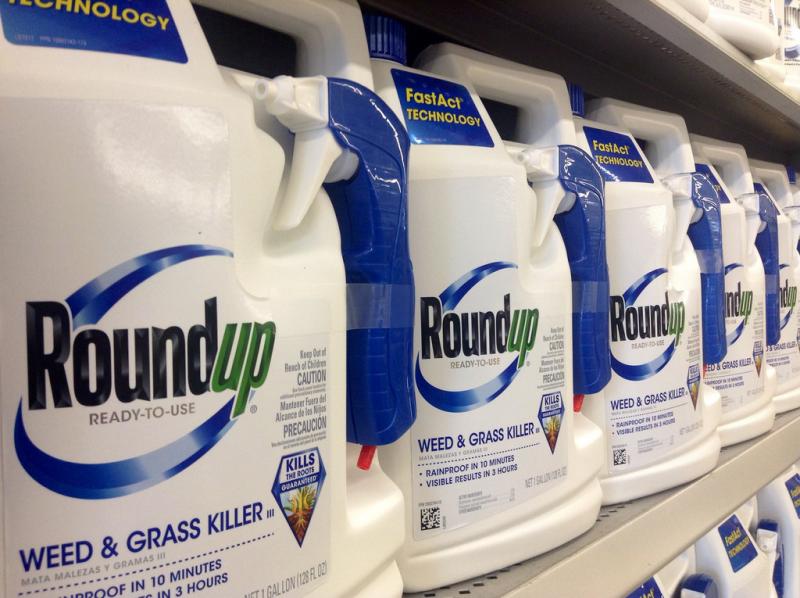 The Glyphosate Saga, & “independent scientific advice” according to Germany, the UK & France

The World Health Organisation (WHO) recently classified glyphosate, the active substance of Monsanto's RoundUp herbicide, as “probably causing cancer in human beings”. Germany is charged by the EU with the safety review of glyphosate: yet three scientists sitting on its scientific panel on pesticides are employees of BASF and Bayer, two major pesticides producers. Meanwhile, the UK has simply privatised its governmental Food and Environment Research Agency (FERA) outright, and France's experts in charge of assessing the safety of medicines have been shown to have been selling undeclared advisory services to pharmaceutical companies on how to best to file their market authorisation applications.

Glyphosate, the active ingredient present in Monsanto's weed killer Roundup, again hit the headlines when the WHO recently classified it as probably causing cancer in human beings. The International Agency for Research on Cancer (IARC) – WHO’s cancer research agency – published their study in The Lancet Oncology on 20 March 2015. Monsanto is up in arms – and has already asked for its retraction, saying the study was “junk science”, "biased and contradicts regulatory findings that the ingredient, glyphosate, is safe when used as labelled".

The battle is fierce, since glyphosate is a cornerstone of Monsanto's business (the company sold more than 5 billion dollars of RoundUp last year). Monsanto has always claimed the herbicide to be much less toxic for animals and humans than other weed killers. But is is not only about Monsanto: pretty much all chemical companies market glyphosate-based herbicides since the patent expired in 2000.

Roundup is sprayed widely in North and South America, where millions of hectares of glyphosate-tolerant GM crops are grown. But also in Europe: where it is widely used by farmers, gardeners and public authorities to kill weeds in public spaces, or on train tracks. It is (together with its degradation product AMPA) the most detected pesticide in French rivers. In 2013, tests commissioned by Friends of the Earth Europe showed that people in 18 countries across Europe had traces of glyphosate in their urine. The Netherlands has banned the use of Roundup (and other glyphosate-based herbicides) in public spaces like parks and side walks as from November 2015. In general, detailed formulations of Roundup are not publicly known as they are considered a trade secret by Monsanto.

Yet in the EU, the issues around glyphosate seem caught in a never-ending saga of delays and conflicts of interest. Glyphosate has been around since the '70s, and was last given re-approval in the EU in 2002. A next re-approval was scheduled for 2012.

Germany is the EU rapporteur member state (RMS) for glyphosate – i.e. has been designated responsibility for assessing its safety on behalf of the EU.

The current authorisation of glyphosate relies on old, outdated testing protocols, and almost exclusively on industry studies. According to a 2011 report by the NGO Earth Open Source, EU regulators knew decades ago that glyphosate causes malformations, something that could even be deducted from industry's own studies, but kept this away from the public.

Germany submitted its glyphosate renewal assessment report (RAR) in January 2014, which was a vast document written up by its Federal Institute for risk assessment (Bfr). It also published a separate answer to critics, arguing among other things that several studies indicating harm could not be fully taken into account given that they did not follow certain very expensive international standards such as GLP (Good Laboratory Practice).

In its report, Germany concluded that: “the available data do not show carcinogenic or mutagenic properties of glyphosate nor that glyphosate is toxic to fertility, reproduction or embryonal/foetal development in laboratory animals.” Germany recommended not only the re-approval of glyphosate for use in Europe, but even an increase in the acceptable daily intake (ADI) from 0.3 to 0.5 mg per kg body weight per day.

Both EFSA and the German regulatory agencies however refuse to disclose the two key chronic toxicity studies that this decision was based on, because these would contain commercially confidential information.

Testbiotech, a German research NGO, strongly criticised Germany's report saying that it failed to evaluate several peer reviewed studies which were omitted for unknown reasons. And to reassure everyone, Bfr's pesticide committee has employees from pesticide giants that profit from glyphosate, two from BASF and one from Bayer, among its members. The current committee (from 2014) includes Monika Bross and Ivana Fegert of BASF, and Frank Pierre Laport of Bayer CropScience. The previous such committee (2011-2013) included two from BASF and two from Bayer CropScience. And the one before that (2008-2010) again two from BASF and one from Bayer CropScience. Bfr's boss, Andreas Hensel, told the newspaper TAZ: “We consciously selected also professionals from the industry for our committees. Many facts around for instance cosmetics or plastics can only be judged by those that work with them.” (A comparable situation prevails at the Bfr GMO committee, as shown by this 2012 report by Testbiotech.)

It should be noted that even at EFSA, where we found that 59% of scientific panels members had direct or indirect links with the agri-food industry, such a situation could not happen as industry employees are banned from sitting on these panels. You cannot work for a corporation and for a government agency charged with regulating that corporation at the same time!

Were such industry employees involved in the glyphosate review? Bfr claimed that the pesticide committee had no formal role in writing the Renewal Assessment Report. So who did write it? We don't know. The authors are not mentioned anywhere in the RAR.

What is clear from the RAR though is that Bfr did not draft its report from scratch but rather used the work of the Glyphosate Task Force (GTF), a “consortium of companies joining resources and efforts in order to renew the European glyphosate registration with a joint submission”. This is how Bfr describes its work:

“Due to the large number of submitted toxicological studies, the RMS was not able to report the original studies in detail and an alternative approach was taken instead. The study descriptions and assessments as provided by GTF were amended by deletion of redundant parts (such as the so-called ”executive summaries”) and new enumeration of tables. Obvious errors were corrected. Each new study was commented by the RMS. These remarks are clearly distinguished from the original submission by a caption, are always written in italics and may be found on the bottom of the individual study summaries.”

In other words, the Bfr was overwhelmed by the volume of industry's submission and only commented on the summaries provided by the Glyphosate Task Force.

As if so many gaps in our knowledge of the safety of glyphosate weren't enough, there is a crucial additional dimension to the problem. So far we've only been talking about glyphosate itself, Roundup's declared active ingredient, because this is the only element within RoundUp to be actually assessed by public authorities. However, by the time its sprayed on the field, its mixed with many other chemicals. Glyphosate-based herbicides' formulations are not public (producers say they're a trade secret), but we know they combine glyphosate with, for instance, surfactants that facilitate the herbicide being taken up by the plant. These chemicals are very toxic, some more than glyphosate itself. As journalists Pete Farrer and Marianne Falck reported in The Ecologist, Germany has secretly forbidden the use of the most dangerous surfactant (POEA, polyethoxylated tallow amine) - but is not warning the rest of the EU. Green MEP Martin Haüsling commented: "Even though I have been criticising the European Food and Safety Authority for many years because of its conflict of interest with the agricultural industry, it would be wrong to blame them alone. The national authorities play a big role in this process."

The UK has just taken a far more drastic step than appointing industry employees on its public risk assessment panels when it comes to undermining independent scientific advice. The government privatised its public research agency altogether. The country's Food and Environment Research Agency (FERA), employing over 400 researchers, has just been sold off to consultancy group Capita, a faceless outsourcing giant reported by The Guardian to be swallowing up to 3.3 billion GBP in government spending for doing work outsourced by numerous government departments. Capita was dubbed 'Crapita' by the British satirical magazine Private Eye for its many blunders, such as the catastrophic way they managed housing benefits.

For some years, the Department for Environment, Food and Rural Affairs (DEFRA), then led by agribusiness champion Owen “Badgers” Paterson, said it was looking into possibilities for 'partnerships' with the private sector, but in the end outright privatisation must have seemed the simpler option. This privatisation of a public service is part of what is ironically called the 'Civil Service Reform Plan'.

What could possibly be the benefit of selling this service off for at least the next 10 years for a mere 20 million GBP? Capita promises to invest more in the next five years and double FERA's “sales” by expanding its commercial services.

This means zero independence left, since the Agency will have the same corporations as clients that they also need to help regulate by delivering scientific assessments. For Defra this does not seem problematic. They commented in the media that the joint venture "will enable Fera to play an even greater role in helping to drive growth in our £100 billion agri-food industry". So much for food safety!

Professor Tim Lang told The Independent that “once the agency is privatised, it will be under pressure to ignore low-paying projects vital to public safety and the environment in favour of more lucrative research.” He added: “No one will pay for evidence about food and biodiversity, or food and pesticide residues”.

It is ironic that it was precisely in the UK that many staunchly defended the former post of Chief Scientific Adviser to the EU Commission President in the name of independent science. When a broad group of NGOs (including CEO) wrote last summer in an open letter to Commission President Juncker that the CSA role should be scrapped as it concentrated too much influence in one person and undermined scientific research and assessments already being done by the rest of the EU' scientific evidence appraisal system, these NGOs were lambasted as “anti-science” in a well-orchestrated campaign by UK-based organisations. But now that it is not a top-level adviser but an entire public food safety research institution which is being scrapped, these enthusiastic defenders of independent science remain silent.

Last but not least, in our sobering tour of national scientific authorities' performance at making independence from big business a bad joke: a big scandal broke last week in France after journalists from Mediapart revealed that, for more than a decade, key members of the country's national expert commissions in charge of assessing the safety of medicines prior to their market authorisation were at the same time selling undeclared consultancy services to these pharmaceutical companies on how best to present their applications, with payments made in cash and not declared as revenue. One of them, J.P. Reynier, even sat on the Board of the European Medicines Agency between 1996 and 2003.

There are heated discussions these days about the problematic consequences of public suspicion of science and technology. But how can one expect popular trust when public regulators are siding with the corporations whose products they are supposed to regulate, rather than with the public interest?