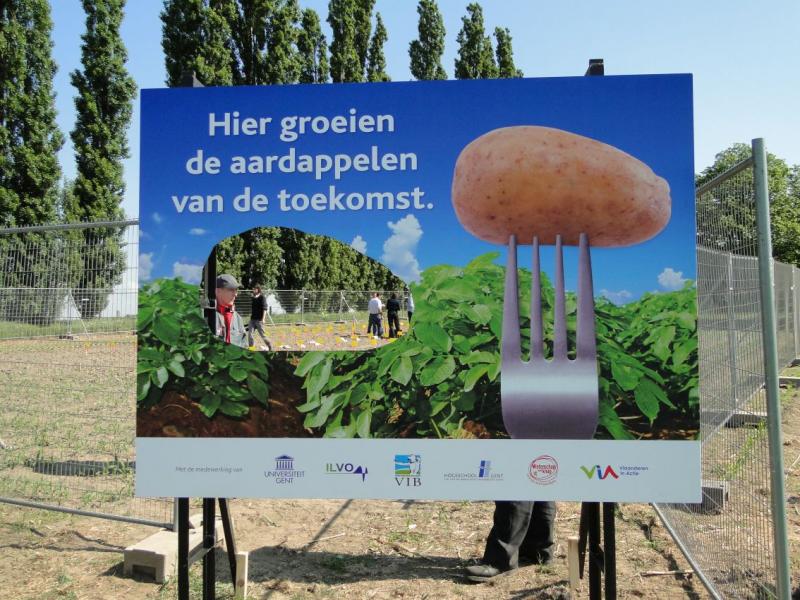 The voice of the Dutch Government has been loud and clear in Brussels on the issue of cisgenic plants. The Dutch have waged a sustained campaign to have new GM techniques – and in particular cisgenesis – excluded from EU GMO regulations. Several Dutch ministries, the Dutch Parliament, the Dutch Permanent Representation in Brussels, and Dutch MEPs have energetically pursued this goal. PDF of this case study.

So why is the Netherlands so focused on the regulatory status of cisgenesis? In short, the Dutch are hoping that cisgenic genetic engineering can make the Dutch plant breeding sector more competitive. The Netherlands is known for its considerable stake in the seed industry. The Dutch potato sector for example accounts for 60 per cent of global exports in seed potatoes.1 However, fears have been expressed in The Hague that the sector could lose its standing if competitors from other countries are able to use genetic modification, which consumer rejection has ruled out in the Netherlands.2

For this reason, the Dutch Government committed public research funding in 2005 to the development of a 'national GM potato'. Ten million euro was made available to Wageningen University to develop a GM potato that is resistant to late blight (Phytophthora infestans). The project – 'Durable Resistance to Phytophthora' (or DuRPh, which means 'dare' in Dutch) – 'stacks' three to five blight-resistant genes from wild varieties of potatoes, and then inserts them into commercial potato varieties.

Dutch Government policy is to cap public science funding at 50 per cent of a research project, requiring matching funding from the private sector. Yet in this case the Dutch potato sector refused to invest in the project, and the exceptional decision was taken to entirely finance the R&D of the GM cisgenic potato from public science coffers. A sizeable one-tenth of the DuRPh budget – one million euro – was allocated to communication with stakeholders and the public in order to overcome the anticipated resistance to the project.

However, there was an additional obstacle for project sponsors: European GM laws, which play a crucial role in facilitating consumer choice. If classified and labeled as a GMO, rejection by consumers and the potato processing industry would likely stymie the commercial success of the project. Having cisgenesis excluded from GM laws thus became a key objective for the Dutch Government.

In the political arena, the first step was to convince Dutch political parties that cisgenic potatoes should be treated differently from ‘traditional’ GMOs. The Protestant Orthodox party ChristenUnie, which has a history of critical positioning on GM, seemed like a good starting point. Not only was DuRPh researcher Henk Schouten a party insider, but ChristenUnie was entering a government coalition for the first time in 2007. At a parliamentary roundtable on biotechnology that year organised by a ChristenUnie MP, Schouten represented the private arm of Wageningen University – Plant Research International – and repeated that cisgenesis “is closer to nature and the order of [God's] creation”.11

Nonetheless, the director of the Wageningen Plant Sciences Group, Ernst van den Ende, later denied that the University had undertaken any political lobbying: “We deliver facts and insights. We have nothing to do with decision making.”12 He claimed that if university researchers communicate favourably about cisgenesis, they do so “in their personal capacity”.

So let's have a look at the capacity in which Schouten makes the case that cisgenics should be excluded from GM laws in meetings with EU decision makers. While Wageningen University is not an official member of industry's EU lobby vehicle, the New Breeding Techniques (NBT) Platform,  Schouten represents the Dutch fruit breeding company Inova Fruit, a client of Wageningen's Plant Research International, in that Platform. Inova Fruit, which is owned by several large fruit auctioneers including The Greenery, contracted Wageningen University to develop a cisgenic apple variety.13 In this context, Schouten is listed as an inventor in a patent application by Inova Fruit.14 This dual role leads to situations where Schouten wears two hats: at an important meeting set up by the NBT Platform in 2012, Schouten attended both as a Wageningen University researcher and as a representative of Inova Fruit.

This situation illuminates the active role played by Wageningen University in the lobby for the deregulation of cisgenesis. Wageningen's political priorities appear to be focused on the interests of its private clients, as well on potential future spin-offs and the patent portfolio of the university.

The certitude promoted by industry and Wageningen about the safety of cisgenics did not however go undisputed. When the Dutch RIKILT Institute of Food Safety, which is linked to Wageningen University, was asked in 2010 to assess the risks of cisgenics, it concluded that “there is, from a food and feed safety perspective, no scientific basis for a general reduction of requirements for cisgenic crop plant varieties”.16 IKILT also concluded that the definition of cisgenics is ambiguous in terms of food safety, “as it may not exclude wild relatives that are not part of the human diet so far and that can only be crossed under laboratory conditions”. If that is the case, there is no “history of safe use”, and the safety of the newly introduced nucleotide sequences and protein(s) would have to be assessed.17

In 2012, the European Food Safety Authority (EFSA) issued an opinion on the risks associated with cisgenics.18 The only external expert invited to give his view to the EFSA working group developing this opinion was Evert Jacobsen of the Wageningen DuRPh team. The working group concluded that “similar hazards can be associated with cisgenic and conventionally bred plants”. However, it was added that the possibility of unintended changes still mandated a case-by-case assessment.

In the meantime, Schouten had successfully convinced the ChristenUnie that cisgenesis would not constitute an interference in God's creation. Following the EFSA opinion, a ChristenUnie parliamentarian stated that cisgenesis is “not only safe, but also ethically responsible”,19 and tabled a resolution in the Dutch Parliament calling for the exclusion of cisgenesis from EU GMO laws.20 The resolution cited EFSA’s conclusion that the risks from the technique are comparable to those associated with conventional breeding. The other half of EFSA's conclusion however, calling for a case-by-case assessment, was left out of the resolution text. The resolution was voted in by a majority consisting of centre and right-wing liberal and conservative parties. Left-wing parties voted against the resolution.21

From this point on, the EFSA opinion became the Dutch Government's main argument in its push for the deregulation of cisgenics at the EU level. In late 2012, Dutch officials from the Ministry of Environment and the Permanent Representation in Brussels met with Ladislav Miko from the Directorate-General for Health and Food Safety (DG SANCO).22 They conveyed the desire of Dutch researchers and industry “to have some or all new plant breeding techniques out of the scope of the GMO legislation”, and welcomed the EFSA opinion on cisgenics.

Again the following year, both the Dutch Environment Minister23 and the Ministry of Agriculture24 urged the Commission to issue a decision on the new cisgenic techniques. In addition, the Dutch Secretary of State for the Environment told the media that cisgenic crops should go unlabelled, but that a traceability system could guarantee a cisgenic-free organic food sector.25

Around the same time, ChristenUnie MEP Peter van Dalen pushed the issue in a European Parliament report on horticulture. His political group inserted changes favouring a different approval process for cisgenic plants than for GMOs, “so as to recognise that cisgenesis is an accelerated form of conventional plant breeding”.26 The following year, van Dalen prodded the Commission about how and when it intended to act upon this horticulture report.27

The NBT Platform events meanwhile also prominently pushed the case of cisgenesis. (See article 'Biotech lobby’s push for new GMOs to escape regulation'). Schuttelaar & Partners - with offices in Brussels, The Hague and Wageningen - and the lobbyist in charge Edwin Hecker, a former official at the Dutch Ministry of Agriculture, seemed indeed well placed in that respect.

In the meantime, another project promoting a blight-resistant potato had been launched at Wageningen University in 2008. Developed in cooperation with an organic plant breeding institute, this 'Bioimpuls' potato was non-GM and focused on the organic sector. Yet when Wageningen researcher Richard Visser presented the DuRPh project at a December 2015 European Parliament hearing on “new plant breeding techniques”, he failed to even mention this organic potato developed – within the same university – in parallel with the GM one but granted roughly four times fewer financial resources.28

The Dutch Government has clearly gone out of its way to push cisgenics, both in terms of funding and political lobbying. Thus it was an embarrassing defeat when the flagship GM potato – the project that was designed to secure the competitiveness of the Dutch potato industry – failed to attract sufficient industry investment to continue in the summer of 2015.

If cisgenesis were however to be exempted from EU GM laws and thus escape labelling, the situation could change quickly. A struggle can be expected between the Dutch Government and the Parliament: in 2014, the Parliament adopted a resolution demanding that cisgenic products be labelled even if excluded from GM regulation, in order to guarantee freedom of choice.29 This is precisely what government officials and researchers set out to avoid when they began the campaign for the deregulation of cisgenesis. Consequently, if their deregulation lobby proves successful at the EU level, they will find themselves in a very awkward situation. Proposing to label a product that has just been exempted from the EU GM law will not be a popular move in Brussels, where the Netherlands holds the EU Presidency in the first half of 2016.

In the meantime, the Flemish biotechnology institute VIB has taken over the drive to commercialise the Dutch cisgenic blight resistant potato, aiming to develop a GM version of the Bintje potato that is much used for the famous Belgian fries.30 The VIB has in turn become strikingly vocal with EU decision makers in the bid to have new GM techniques excluded from EU laws. “It is to be hoped”, VIB states, “that the EU will not apply the stringent GMO legislation to the cisgenic blight-resistant potato, otherwise the cisgenic Bintje will face a long authorisation procedure”. (See also 'Biotech lobby's push for new GMOs to espace regulation').