At least one developer of new GM crops – US-based Cibus – has attempted to bypass the European policy process by presenting policy makers with a fait accompli: decisions by individual Member States on the regulatory status of new techniques, as well as prematurely-launched trials of new GM crops. PDF of this case study.

Exchanges between Cibus and German regulators reveal the company’s frustration about what it considers legal uncertainty over the regulatory status of one of the new techniques, Oligonucleotide-Directed Mutagenesis (ODM). “This evaluation”, the company noted, “is prolonged, and until a final interpretation is provided the status of products derived with these techniques remain undecided.”1

To break through this apparent impasse, Cibus adopted a strategy that could in effect force the hand of Brussels. The company approached individual Member States to have its first ODM product – a herbicide-resistant oil seed rape developed in partnership with Rotam CropSciences, a global pesticides company – deemed non-GM in their jurisdictions. In the words of a company representative, the authorities “responsible for GMO regulations in EU Member States are being contacted to evaluate how field trials with this material can proceed”.2

Cibus is known to have approached at least six Member States.3 This manoeuvring could, as one regulator noted to the Commission, create division within Europe as “interpretations by each individual Member State may lead to a situation where the interpretations in the Member States may differ from each other”.4

In 2011, the company made formal enquiries with the UK regulator DEFRA, and subsequently approached the Swedish Gene Technology Advisory Board. To the latter, Cibus expressed interest in “the unconfined release of our herbicide [sic] spring oilseed rape in Sweden”.5 After reviewing the applications, the UK and Swedish regulators cautioned the company that although they did not consider ODM as meeting the legal definition of a GM technique, this determination was only relevant in their territory and the European Commission could take a different view.67

Cibus made similar overtures to the Finnish Board of Gene Technology. In early 2014, the Board contacted Brussels for assistance, citing its “challenging position” of having to respond to developers in the absence of legal clarity.8

The Commission warned the Finnish regulator against preempting Brussels, stating: “This evaluation is complex and requires a thorough legal analysis by the Commission, which is currently ongoing and is addressing not only ODM, but also other New Plant Breeding Techniques.”9

Finally, in 2014, the company approached the German Federal Agency for Consumer Protection and Food Safety (BVL) for a decision on whether the herbicide-resistant ODM rape was a GMO.

Cibus’s backdoor strategy with the German regulator was led by Perseus, a consultancy specialising in “biotechnology regulatory challenges”.10 The application was shepherded by Perseus founder Patrick Rüdelsheim, who was previously the Global Head of Regulatory Affairs BioScience for GM seed companies Aventis CropScience, Bayer CropScience and the AgrEvo group.11

In initial communications between the German regulator and the company, Cibus was informed that the regulatory assessment “will not include any participation or active information of the public or involvement of other authorities”.12

Ultimately, the German Consumer Protection and Food Safety Agency (BVL) decreed the technique to be non-GM13 – a view that is not shared by all German government agencies. A legal opinion commissioned by the German Federal Agency for Nature Conservation came to the opposite conclusion. This second opinion affirmed ODM as a GM technique, and concluded that the regulatory exclusions cited by the Consumer Protection Agency as a basis for considering ODM as non-GM were never intended to cover novel genetic engineering techniques.14

However, in response to Germany’s announcement that it would allow Cibus to carry out field trials in an entirely unregulated fashion, the Commission quickly sent letters to Germany as well as all of the other EU member states asking them to “await, as much as possible, the outcome of the Commission legal interpretation before authorising a deliberate release of organisms obtained with new plant breeding techniques” since “the deliberate release of products which are subject to the rules of the EU GMO legislation without appropriate prior authorisation, is illegal.”15

Perseus wrote angrily to DG SANTE, incensed that the Commission had written to the German Government requesting that any outdoor trialling be suspended at least until the Commission had issued its guidance – a move that Perseus was apparently not aware of until the Commission letter was released by German NGO, Testbiotech. Perseus had met with the Commission earlier that month, and the company suggests, received an entirely different message from officials: advice on how to proceed with trialling its ODM rape without making waves: "During our meeting it was suggested that Cibus should discuss best practices with the relevant CA [competent authorities, ed.] and that it would be important to consider how to create a serene atmosphere during the evaluation process. The recent letter [from the Commission, ed.] seems to go beyond these suggestions".16

A coalition of 45 German NGOs brought the German Federal Agency’s (BVL) decision to court. Due to these ongoing court proceedings, BVL informed the Commission on 29 July 2015 that its decision to allow the field trial had been suspended.17

Not content with attempting to railroad Europe into deregulating ODM, Cibus is also claiming a fait accompli with respect to Europe’s food supply chain. In an early 2015 letter to the European Commission, the company stated that its novel herbicide resistant oil seed rape, which the company has dubbed Rapid Trait Development System (RTDS™), was “likely entering the international commodity chain” and that “it can therefore not be excluded that commodities with RTDS products are imported in the EU”.18

Yet while the extent to which the ODM rape has entered the supply chain is unclear, very little is likely to have reached Europe – and certainly much less than the company’s communication with the Commission might suggest. Despite Cibus’s expectations of “rapid market expansion in North America”,19 the commercial rollout of its new GM oilseed rape has experienced several delays. Following earlier predictions of a commercial release in the US in 2013, Cibus later foresaw a relatively modest planting of 40,000-50,000 acres in 2014 – around 3% of the total US canola acreage that year. The actual scale of last season's production has yet to be officially confirmed by the company.20 Meanwhile, it is now believed that there may not be a limited release of ODM oilseed rape seed on the Canadian market until 2017 or even 2018.21

Fake it till you make it

Since at least 2007, Cibus has repeatedly let it be understood by North American agricultural sectors that its ODM technology is not GM under European law22– long before Europe has even come to a formal and final decision on the matter. The company has been recruiting North American partners to develop new food crops using the technique, and in a sales pitch that aims to build momentum, has been securing R&D joint ventures and public science funding on the basis of false assurances.

Four years ago, the company boldly stated: “We are very confident we won’t have any issues at all in taking our technology into Europe as a non-GM technology.”25 This confidence appears to have been misplaced, as the German regulator’s decision has proven highly controversial. Consumer protection and environmental NGOs, as well as other groups in the country, are calling the move a 'backdoor bid'26 to get GMOs into German agricultural fields. The case looks set to go all the way to the European Court of Justice – not exactly the positive publicity or brand association the company has promised to investors. 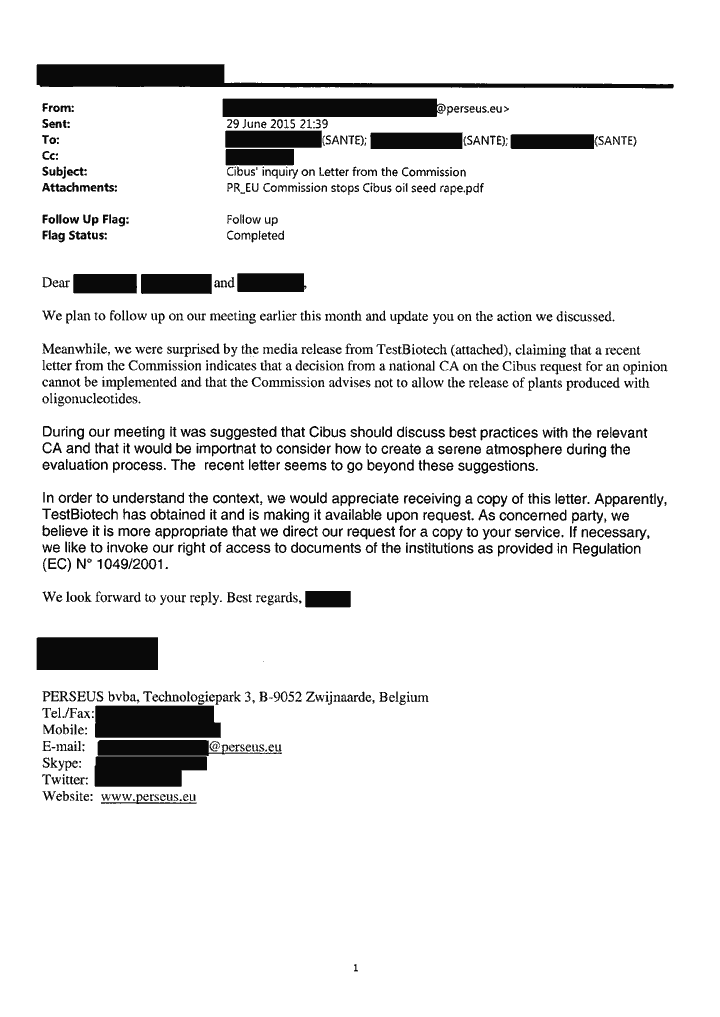