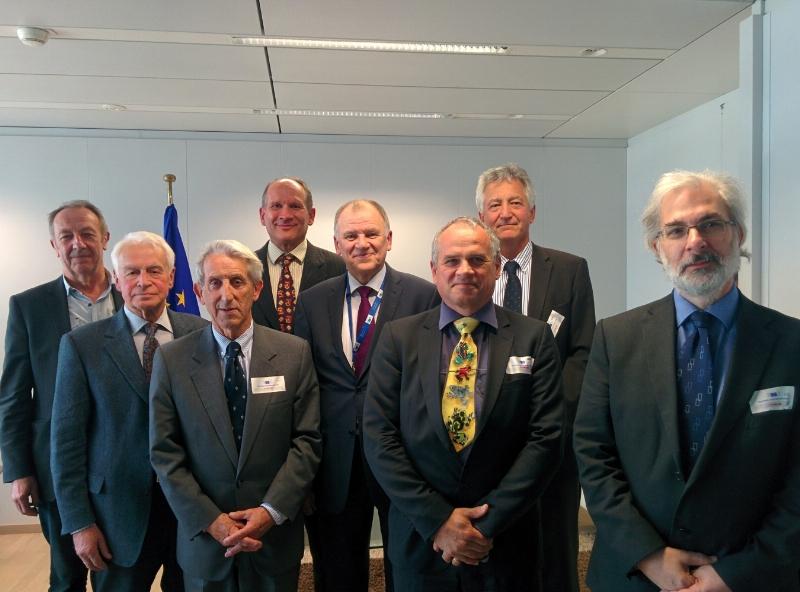 A Busy May For Professor Boobis

This May is dense on the EU chemicals regulation front. Crunch time for two major files: the European Commission needs to publish the identification criteria for endocrine disrupting chemicals, and together with EU States must decide how, or not, renew the market approval of glyphosate, an herbicide produced and defended by Monsanto. Last week, the Professor Alan Boobis happened to be involved in both.

An expert in regulatory toxicology from the UK's Imperial College, Alan Boobis has had a long scientific and regulatory career. He has published more than two hundred scientific papers and has belonged to several expert panels in EU and global public regulatory authorities. He also is a vice-president of ILSI Europe, the European branch of one of the largest food industry lobby groups in the world, the International Life Sciences Institute, funded by corporations such as Monsanto, BASF, Coca-Cola, Kraft, and McDonald’s. The conflicts of interest at the European Food Safety Authority (EFSA) involving this lobby group triggered a scandal in 2012 which cost the agency a six month postponement of its budget approval by the European Parliament. Boobis refused to leave ILSI in 2012 and as a consequence could not be reappointed on a panel at EFSA afterwards.

ILSI organises work streams that try to replicate and anticipate EFSA's as well as other regulatory agencies’ in order to influence them. The idea is to bring together scientists from these agencies, academia, industry, and the public sector to work in a spirit of 'partnership' but on priorities defined by industry. A project Boobis was recently involved in at an ILSI offshoot (HESI) is called RISK21, a wide-consulting initiative to propose methodologies for “exposure-driven” (therefore not hazard-driven, we'll come back to that later) public risk assessments, which he led together with a scientist from Syngenta, Timothy Pastor.

It was almost a consensus

The definition of criteria to identify endocrine disrupting chemicals (EDCs) is absolutely key to resolving the long battle to regulate them at the EU level. These scientific criteria should have been in place by December 2013, but heavy industry lobbying threw a spanner in the works: certain chemicals identified as EDCs would need to be banned. Protestations by NGOs and a court case by member states followed. The European Commission is now expected to publish these identification criteria before summer – indeed many lobbying battles are first and foremost about definitions. In this case, doses.

A strategy industry has used here to try to delay or halt regulation has been to amplify a conflict in the scientific community. In this case, it supports toxicologists who defend the time-tested approach that toxicity primarily depends on the dose, but against endocrine specialists who explain that this paradigm is not operational in their field since the hormonal system does not work with a proportional response between dose and effects, that identification criteria must be broader and that the determination of 'no observed adverse effect ' thresholds, a strict condition for authorisation, is in certain cases impossible. Meaning a ban.

The idea has quite logically had the chemicals, pesticides, and plastics industry up in arms. Their strategy has been to impose ‘potency’ as only cut-off criterion for identifying endocrine disruptors – which would allow many EDCs to remain on the market. But to do this they had to provide as much as possible of a credible “scientific opposition” to keep uncertainty high.

A breakthrough to a conflict of several years between the two 'camps' was thought to have been reached some weeks ago, when both came together in Berlin in April 2016 at a meeting facilitated by the German Federal Risk Assessment Institute (BfR). The purpose of the meeting, moderated by Anne Glover, the former Chief Scientific Adviser of the European Commission (who had already facilitated such a discussion in 2013), was to elaborate together a consensus statement on the state of knowledge and ignorance on the matter. This statement, importantly, explained that “potency is not relevant for identification of a compound as an endocrine disruptor” and that it was only an “important factor for consideration during the characterization of the hazards of endocrine disruptors.”

But this couldn't please industry.

So, a few weeks later on 3 May, several scientists from the 'industry camp', including Boobis (right in the picture), calling themselves “Concerned Toxicologists for Better Science and Regulation”, had a meeting with the EU Health Commissioner, V. Andriukaitis, to convey to him what the 'consensus' had been. The press release which came out of this meeting offers quite a skewed version of the consensus statement, starting with its subtle title: “Well-known Scientists Ready to Stem the Onslaught of Pseudoscience in the EU”. High Priests To The Rescue Against Barbarians!

The release went on to slam the “dogmatic” scientists who think that “EDCs should be treated as a special case", and stated that “potency and consideration of likely human exposure are necessary for any adequate evaluation of the human or environmental effects of EDCs”.

This sounds like an attempt to overturn the “consensus” – that most of them had signed – and an attempt to revive the indispensable “scientific controversy” that industry needs to keep delaying regulation. It could also simply be scientists defending their opinions and feeling the urge to go meet the Commissioner at such a crucial time? In any case, the release was enthusiastically retweeted by lobbyists from Bayer, the pesticides lobby or the plastics lobby.

[Update from May 23: French newspaper Le Monde (in an article written by S. Horel, a free-lance journalist who already published joint investigations with CEO) found that our “Concerned Toxicologists for Better Science and Regulation” had their expenses for the meeting paid by the European Risk Forum. The ERF is a Brussels think-tank created by the tobacco industry in the 1990s to fight the tobacco bans in public places. In 2016, the ERF is funded by 18 membres: lobby groups representing the chemicals, plastics, pesticides and toy industries in Brussels (CEFIC, PlasticsEurope, ECPA, Toy Industries of Europe), the nickel industry (Nickel Institute, Norilsk Nickel Europe) and individual companies such as BASF, Bayer, Dow, Syngenta, IFAH-Europe (veterinary medecines), British American Tobacco, and Philip Morris International].

A herbicide in need of a rescue

Glyphosate is another file on top of the pesticides lobbys' and the European Commission's agenda. CEO has extensively covered this ongoing regulatory drama where the flaws of the EU's pesticides evaluation system have been particularly exposed: anonymous officials using secret industry data found that the herbicide was unlikely to cause cancer in humans, whereas cancer specialists1 gathered at the International Agency for the Research Against Cancer (IARC, a WHO agency), only using publicly available data and accepting observers (including Monsanto), found the opposite. Since the data used by EFSA cannot be used by independent scientists because industry considers it is a trade secret, the normal scientific method of cross-examination of the same data cannot happen, and politics is all that is left. After a first meeting where they failed to reach a qualified majority in favour or against the market authorisation renewal, EU member states are meeting again on 18-19 May to decide.

In such a context, any additional public assessment would be important. And, coincidence or not, an international body, the Joint Meeting on Pesticides Residues (JMPR, a joint body to the WHO and the FAO), held an “extraordinary meeting” last week in Geneva to discuss glyphosate and IARC's findings again (JMPR's previous assessments of glyphosate, from 2004 and 2011, had been reviewed as lacking data compared to IARC's). Its conclusion was published on Monday 16, two days before the meeting of EU States, and stated that “glyphosate is unlikely to pose a carcinogenic risk to humans from exposure through the diet”, a rather different assessment to IARC's that got Monsanto cheering – although the assessment was not relevant to the EU's Pesticides Regulation (which is hazard-based for carcinogenicity), and more limited, occupational exposure not being looked at and for an exposure only looking at pesticide residues while IARC looked at higher doses. And who was the first name on the list of JMPR experts for this panel? The ubiquitous Professor Boobis! One can also observe the presence of Angelo Moretto, an Italian toxicologist who resigned from EFSA's Pesticides panel in 2011 after it was found he had omitted to declare his interests at ILSI, and who also took part in HESI's RISK21. According to S. Foucart, a journalist from French newspaper Le Monde, Boobis and Moretto were respectively Chair and co-Chair of the meeting. It doesn't mean that the JMPR conclusion would necessarily be wrong, but indicates that in any case JMPR's independence policy is even worse than EFSA's.