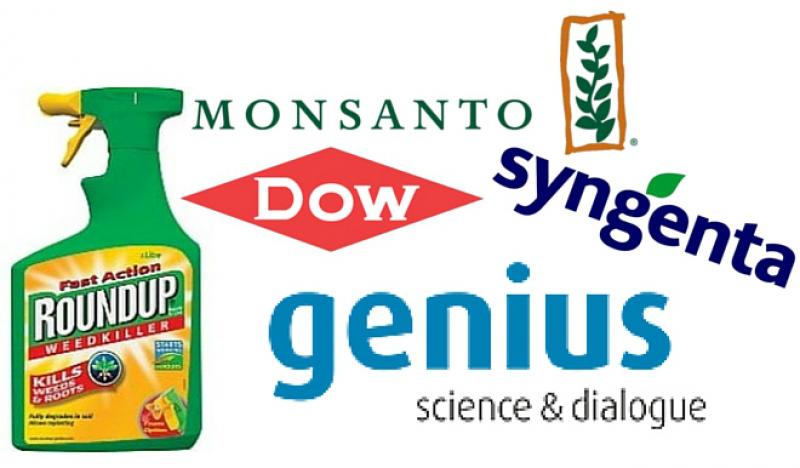 The lobby firm that works both sides of the room

In Brussels, hundreds of lobby consultants make a (rather generous) living by running lobby campaigns on behalf of anyone who pays them. The borders between communication and PR strategies, law expertise and traditional lobbying are blurred. Demonstrating the problematic symbiosis between corporate interests and the EU institutions in Brussels, the same lobbying consultancies often get hired by both, bringing serious risks of conflicts of interest. A case in point: Germany-based lobby consultancy Genius and its work for the Glyphosate Task Force.

The European Commission – as shown again recently in The Guardian – seems hell bent on granting glyphosate, the active ingredient in Monsanto’s toxic herbicide Roundup, re-approval for another ten years. This is despite the fact that the World Health Organisation’s cancer institute IARC declared the substance as “probably causing cancer to humans”, and that EU pesticides rules say such substances should be banned.

To run their website, glyphosate producers hired Genius, a lobby consultancy based in Darmstadt, Germany. At the same time, Genius is employed by various EU and German public authorities on topics that are of key interest to these corporations, notably GMOs.

According to Genius' website, the company works for the biotech and pesticide industry at large. In addition to the Glyphosate Task Force (GTF), it has been hired by biotech lobby group EuropaBio, its German member organisation DIB, and individual corporations including Bayer, BASF, and Syngenta. It also works for the Brussels-based corporate food think tank EUFIC (European Food Information Council), even though it’s incorrectly listed as a “public authority” on Genius’ website.

Monsanto, Syngenta, and Dow (all members of the GTF), as well as BASF and Bayer coordinate a lot of their lobbying efforts via lobby associations like EuropaBio. All of them share a deep commercial interest in the re-approval of glyphosate and in the continued production of glyphosate-tolerant GM crops, also via the sales of other brands of pesticides used for the same crops.

Genius specialises in “science communication”, which in their own words means: “translating science as it works for better understanding between industry, politics and the public at large”. They offer their clients “integrated communications strategies” that combine public relations, public affairs, internet and traditional media relations, scientific studies, event management etc.

In the case of glyphosate, Genius conveniently “translates” the science on its toxicity for its clients from the pesticide industry by writing on the Glyphosate Task Force website that it does not cause cancer, and saying that the IARC “should withdraw the decision” to classify glyphosate as a Group 2A carcinogen.

On the other side, Genius also lists public institutions as its clients that are in charge of regulating the industry’s products, including the European Commission, the EFSA (European Food Safety Authority), and no less than ten German federal and regional authorities, including the German risk assessment agency Bfr. This is important because Germany is the Rapporteur Member State for the re-approval of glyphosate, and Bfr is the agency in charge of the renewal assessment report.

In some cases, we know that Genius' work for public authorities was carried out at the same time as the work for the Glyphosate Task Force, which started at least as far back as autumn 2012, when its website was launched.

Lobby consultancies like Genius can manoeuvre themselves into this double role while staying entirely below the radar: Genius has not even signed up to the voluntary EU lobby transparency register – showing once more why it should be mandatory.2

An important example is GRACE (GMO Risk Assessment and Communication of Evidence). Kristina Sinemus, Genius' Managing Director, and its co-founder Klaus Minol take part in this project. German civil society organisation Testbiotech has closely followed GRACE and took issue with Genius’ participation in it. The organisation has pointed out how conflicts of interest have enabled the biotech industry to seriously impact the project’s results.

About half of the experts participating in GRACE have close ties to industry lobby groups like ILSI (International Life Sciences Institute), PRRI (Public Research and Regulation Initiative), and/or to industry-funded organisation ISBR (International Society for Biosafety Research). Genius is not the only lobby consultancy participating in GRACE; Belgium-based Perseus also works with companies aiming to get deregulation for new techniques of genetic engineering.

The GRACE project is important, since it feeds directly into the process by which the European Commission in 2016 will decide on further standards of risk assessment for GM crops. Testbiotech warns that “there is a substantial risk that the EU Commission will come to false conclusions, and could fail to set sufficiently robust standards to maintain the precautionary approach as required by EU regulations”.

The GRACE project, involving Genius as a participant, was approved by the European Commission in July 2012 and finished in November 2015 – running practically parallel in time to its work for the Glyphosate Task Force.

As for the German side of the story, Genius company material states that "Through the communication platforms www.biosicherheit.de and www.pflanzenforschung.de, Genius acts on behalf of the German Federal Ministry of Education and Research to connect in a positive way research and the general public" (emphasis added). Both websites deal with public communication about GMOs which is a key interest of the corporations mentioned above. Biosicherheit.de is currently not accessible (see an older version here), but pflanzenforschung.de is. This is an ongoing case, constituting a clear conflict of interest.

Genius also worked in the past for Bfr, the agency responsible for the renewal assessment report on glyphosate. In 2010 for instance, Sinemus chaired a two-day forum on endocrine disruptors organised by the Bfr.

Moreover, between 2006 and 2009, Genius worked for EFSA, the European Food Safety Authority responsible for risk assessing the products of Genius' pesticides/biotech clients. Their role was to “support the European Food Safety Authority through editorial work and public relations tasks”, and tasks included the 2006, 2007, 2008 and 2009 annual reports, background texts for the website, and a newsletter, as well as doing communication work for a conference on GMO risk assessment for human and animal health and the environment that was held in Brussels in 2009.

Genius has been involved in numerous other EU funded projects in the same field. This includes the ongoing GMO-COMPASS, an information website on GMO crops and their commercialisation, funded by the Commission from 2005-2007, by EuropaBio in 2007, and by the German Federal Ministry of Food, Agriculture and Consumer Protection (BMELV) from 2007-2008. Genius also runs the editorial office of the website of CO-EXTRA, an EU-funded project focussing on the co-existence and traceability of GM and non-GM crops. It is a public-private partnership, whose participants involve companies, research institutes (which include those with strong industry links such as the Flemish VIB), and lobby consultancies like Genius and Schuttelaar & Partners.3 Furthermore, Genius participated in BIOSAFENET project which claims to be about the “impartial bundling of biosafety knowledge for the socio-political decision-making framework”4, and in “BEETLE” (Long-term effects of genetically modified crops on health and the environment; finalised in 2007) funded by DG Environment of the European Commission. Participants came from German public bodies including the Federal Office of Consumer Protection of Food Safety (BVL), and a few consultancy firms like Genius.

Finally Genius is part of one of the Commission's industry-driven European Technology Platforms (ETPs) called 'Plants for the Future', itself a nice mix of the same corporations, the European Commission, and the German Ministry of Science and Research. ETPs are known to drive public research funding into private hands, following a corporate agenda (see for examples here and here).

In less than a fortnight, EU Member States will take a decision on the re-approval of glyphosate. Genius is working to get this toxic herbicide re-approved by communicating the industry's mantra that glyphosate is scientifically proven safe, sponsored by Monsanto, Dow and Syngenta. At the same time, they are being paid by German authorities and EU-funded projects to work on issues that are closely related to glyphosate, and that are key to the interests of the same corporations. Public authorities using the same lobby consultancies as the corporations they are supposed to regulate is highly problematic and should not be allowed.

2A different lobby consultancy is signed up in the register with the name Genius.

3 The latter is another lobby consultancy that works for the biotech industry to get new techniques of genetic engineering deregulated.

4 BIOSAFENET activities are coordinated with another EU funded project called Science4BioR (Global involvement of public research scientists in regulations of Biosafety and Agricultural Biotechnology), which had industry lobby group PRRI as one of its partners. In fact, this EU project was for several years pretty much PRRI's only funding. PRRI is a small but well-connected industry-funded lobby group, pretending to be representing ‘public researchers’ in biotechnology.