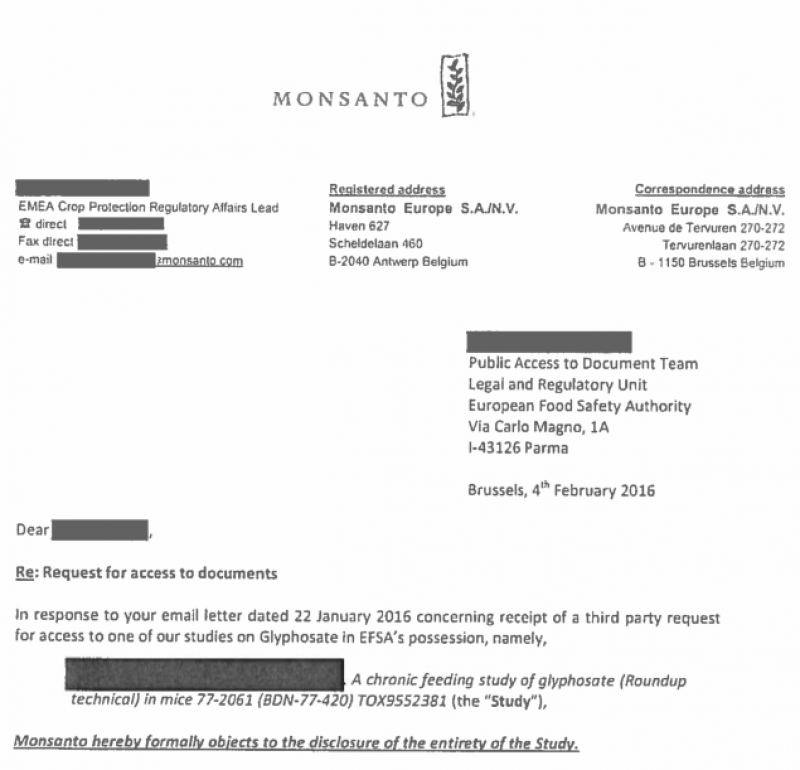 Glyphosate: the pesticide industry keeps the data secrecy scandal going in the name of 'investment protection'

The ongoing political drama around renewing the EU authorisation for glyphosate began as a rather unusual conflict between two international public health organisations, the WHO's International Agency for Research against Cancer (IARC) and the European Food Safety Authority (EFSA).

Although they reached opposing conclusions on the cancer-causing properties of glyphosate, the issue that quickly escalated their discussion into hostility was the impossibility of cross-examining the underlying evidence. EFSA was able to include the entirely public IARC assessment into its own work, but was obliged to withheld the superior evidence it said it had, only publishing summaries lacking essential information.

The studies in question were part of the dossier companies must habitually provide when requesting market re-authorisation – they had not been published anywhere and belong to the companies, meaning EFSA would most likely get sued by said companies if it were to publish them.

In December 2015, CEO filed an access to documents request to EFSA, asking for three studies, owned by Monsanto, Cheminova and Arytsa respectively, that were particularly central to EFSA's assessment of glyphosate’s carcinogenic characteristics and thus far unavailable to the IARC. But seven months down the line, we're still waiting : the companies continue to refuse disclosure, negotiating redactions with EFSA as well as the Commission, as broader disclosure requests have been made. Instead, they keep proposing useless “reading rooms”, which do not allow for public scrutiny of the studies, nor sufficient analysis of the data.

What arguments are used to prop this up ?

We filed another access to documents request asking for the industry's reasons for opposing disclosure, and only just received a first response which we have published in full. See section below for some quotes and comments.

The main argument found in all companies' letters is that these studies which they perform out of their administrative obligations to obtain market authorisation are in fact “investments”. This is of course misleading (for companies, these studies are regulatory costs, not productive investments) but enables them to claim the data qualifies for investment protection regime. The three companies' letters all refer to the protection of commercial secrecy and have much common wording – even sharing entire sentences, which could be expected given that they are lobbying in common for glyphosate within the so-called Glyphosate Taskforce.

The companies also argue their case from different angles. Monsanto mainly uses commercial secrecy, Cheminova relies more heavily on intellectual property, and Arysta emphasises the legal protection of ongoing decision-making processes in the EU (even though EFSA finished its work in November 2015). They also include more ad-hoc legal elements, such as an article in the EU's Pesticides Regulation protecting the confidentiality of the identity of persons involved in animal testing. All refer to the importance to preserve their data from competitors, which is rich if you remember that most “competitors” on the glyphosate production market have put their data in common for this market re-authorisation procedure (the patent on glyphsate expired 15 years ago).

But the core of their message is always the same: the study data is our property, no trespassing.

As long as these studies are kept secret, it will be impossible for the scientific community to assess EFSA's conclusions and therefore for the public to understand the validity of the EU's decision, whichever way. Conveniently for industry, this secrecy also makes it impossible to judge whether it is actually justified. It has become clear that the rules of the game are rigged in favour of companies and at the expense of the public interest. This must be changed.

The bottom line of the case

This bottom line has been well summarised by Dr. Christopher Connolly, Reader in Neurobiology at the University of Dundee, Scotland, who said:

“The failure of the PAFF Committee to reach a qualified majority on the issue of glyphosate use sends a strong message that more scientific knowledge is required on the hazard/risk of glyphosate to both human health and the environment. Until this evidence is convincing, one way or the other, glyphosate may no longer be authorised for use in the EU. Clearly, the authorisation process requires a more robust framework, on which sound decisions can be made.

The research should be performed much earlier in the process of authorisation, with the evidence being produced by independent laboratories, the data made available to the scientific community, and the cost met by the producer.”

- “The Study is privately owned by Monsanto and is used for the renewal of the approval of the active substance Glyphosate”, and its disclosure “may harm legitimate interests of Monsanto as it is prejudicial to the “commercial interests” of Monsanto (in the meaning of Article 4(2) of Regulation 1049/2001”

Why is a toxicity study a commercial interest? Monsanto explains that the administrative requirement to provide a study is, in fact, an... investment.

- “The Study represents a material investment in time and money for Monsanto and its findings form part of the core data package and knowledge of relevant product. If the study is made available to the public upon request, this will make investment efforts of businesses like Monsanto useless, because effectively anyone, including competitors, would then have access to key commercial information without any expense for possible use in and outside the EU.”

Which is wrong (for the company, these studies are regulatory costs, not investments) but enables our writers to claim that these studies of mice having had miserable lives 30 years ago actually contain “key commercial information”. Was it really that bad?...

The next step is logically to calling for 'balancing' the disclosure for public health reasons and commercial secrecy:

“It is the duty of the EU Institutions to balance the contribution which the information makes to the protection of public interest, notably disclosure for public health reasons, and the degree of damage to commercial secrecy resulting from the disclosure”

“Inter alia, above information includes know-how (e.g., Monsanto's scientific approaches and justifications, suggested and applied testing methodology, etc.) relating to the scientific expertise and strategy, created by Monsanto when preparing the dossier for disclosure in confidence to EFSA. Accordingly, such Monsanto's know-how would be adversely affected if disclosed to the public.

In view of the above, Monsanto hereby requests to refuse in access to documents of the Study.”

But they know they cannot refuse partial disclosure: bluff only works so far, and summaries have already been published by EFSA. So they also try to prevent dissemination of the material with the “reading room” idea: you read, and that's all you're allowed to do. Easier for industry, easier for the administration (redacting all these pages is a particularly tedious job), but a waste of time for everyone else.

“Without prejudice to the above arguments, should EFSA still consider granting access to the document to the third party, Monsanto would insist on making The Study available to the thirs party in a closed data room, without any possibility to make copies, reproduction or communication of the information and under logistical conditions to be agreed with Monsanto”.

“Cheminova formally objects to the disclosure of the entirety of The Study.”

Yes, it starts the same. But then Cheminova uses another concept than Monsanto's commercial secrecy: intellectual property.

“The Study is owned by Cheminova and is protected by intellectual property rights. On that basis, all summaries, assessments and other documents included in The Study may not be disclosed, as this would jeopardize the proper execution of the intellectual copyright.”

Then the exact same arguments than Monsanto: investment, vague but nasty competitors...

“the data represents a substantial investment in time and money for Cheminova and the findings form part of the core data package and knowledge of the product”.

“If The Study was made easily available upon request, businesses would be reluctant to conduct research to register their substances since third parties including competitors would then have access to key commercial information for possible use in the EU and/or outside the EU”

And Cheminova's letter ends with the same suggestion: a reading room.

Arysta's first argument is different, and unusual: it tries to use the third exception of the 1049/2001 Regulation on the “integrity of the decision-making process of the institutions of the European Union” which is meant to protect ongoing work by the EU institutions, even though EFSA finished its work in November 2015. But it then uses the two others: protection of commercial interests and intellectual property.