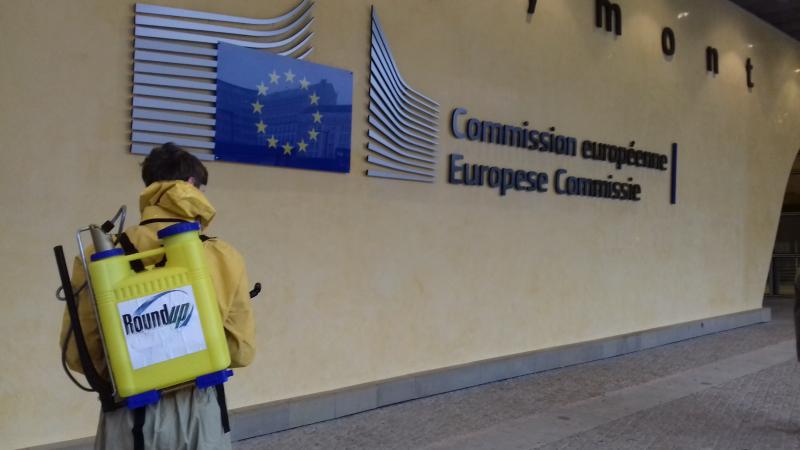 European Citizens’ Initiative to #StopGlyphosate: a chance to tackle key issues in pesticide safety and agriculture?

Together with 37 organisations from across Europe, CEO launched the #StopGlyphosate European Citizens Initiative (ECI) this morning. We’re jointly trying to collect signatures from at least one million EU citizens before the summer – an ambitious but urgent goal we are hoping to reach as the European Commission and national governments will likely take their final decision on glyphosate then. The petition is hosted by WeMove.eu.

It’s an excellent opportunity to highlight the deep flaws in the EU’s rules on pesticide approval, to push for reform and to broaden the conversation about much-needed changes in European agriculture. Please sign the ECI and don’t hesitate to share the initiative with your contacts.

One of the reasons why glyphosate use has also been so controversial in Europe is that its EU safety evaluation was based on secret industry studies. This kind of secrecy panders to corporations and prevents proper scientific scrutiny of EU food safety decisions, meaning toxic products remain authorised for way too long. Pesticides should only be assessed on the basis of published evidence.

A glyphosate ban will be an important step towards reducing European agriculture’s addiction to biocides, especially now that we are experiencing the worst biodiversity collapse ever recorded. But it has to go hand-in-hand with support measures for the many farmers who still rely on glyphosate, otherwise they might be left worse off. Indeed, chemical substitutes to glyphosate (dicamba, glufosinate, 2,4D…) are typically more toxic, and sometimes also more expensive.

At the end of the day, there is no way around the fact that farmers’ terms of trade must improve. Last year, one third of French farmers had to survive with less than 350€ net a month, despite very long hours and hard physical labour. More than 600 French farmers committed suicide last year, the highest rate among all professions. To enable farmers to finally make a decent living out of their work without poisoning themselves and to move agronomy practices that do not compromise public health, the environment and our capacity to produce food in the future, societal support is urgently needed. The upcoming reform of the EU’s farm subsidies (the Common Agriculture Policy – CAP) will provide the next good opportunity to do so.

Nice, a petition against glyphoate. I have signed others in the past but it seems this petition goes under the banner of wemove.eu. I don't want to be associated with them but now I am. You could have warned about this. Now they have my data. NOT NICE. And the site where I could find out more about which other organizations are involved in this petition (and that I might also do not want to be associated with), a site called stopglyphosate.org, is so improperly configured that my webbrowser warns me it is not safe and that my data can be gathered. What is going on here?
I love you at CEO but here you are dropping the ball.

Hi,sorry for the trouble, yes
Martin Pigeon
Thanks
Anonymous

Thanks for this. I'd rather preferred that the petition was hosted by a common platform instead by a single player but I understand that takes a lot of work to setup.
I love you guys and girls at CEO. You deserve much more attention and appreciation for what you do, keeping an eye on the EU, lobbyists and big corporations. I try to promote you wherever and whenever I can. Keep up the good work!

600 FARMERS!!! The same thing is happened in India with their GMO "drought resistant" cotton failing. Monsanto is spreading death and destruction everywhere they go.
http://www.mo.be/en/analysis/tanzanian-farmers-are-facing-heavy-prison-…
A continued persistent concerted effort is going to have be made to make changes to benefit the World's Agricultural System which they have been in the process of destroying for decades.
Their productions have reeked havoc on the health of the world population and our food supply.