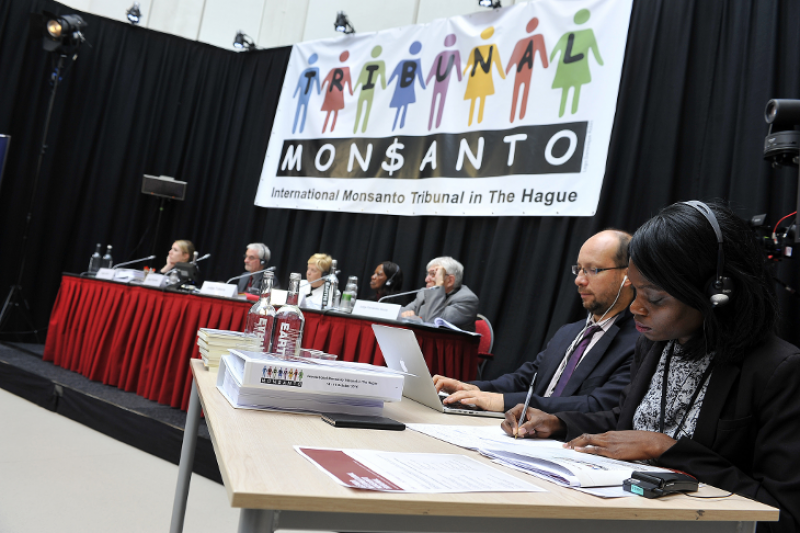 Today, judges delivered their legal opinion on the evidence and witness statements presented at the Monsanto Tribunal that was held in The Hague (NL) in October 2016.

The tribunal concluded that:

During the hearings that took place in The Hague in October 2016, judges heard testimonies from witnesses from all over the world, who testified how Monsanto has violated human rights and has committed crimes against the planet by aggressively promoting its products, lobbying politicians and attacking independent scientists.

Based on these testimonies, and considering both existing international law and ongoing legal initiatives aiming to improve the protection of human rights and the environment, the judges concluded that Monsanto has indeed infringed on the public’s rights to food, health, a healthy environment and the freedom indispensable for independent scientific research.

In their final conclusion, the judges highlighted the current imbalance in the international system, which offers much better protection to corporations and their financial interests (through trade and investment law including ISDS courts) than it does to human rights and the environment. It is now crucial for the UN to act on this widening gap, they warned, as “otherwise key questions will be resolved by private tribunals operating entirely outside the UN framework”.

The verdict of the Monsanto Tribunal has our fullest support. Its legal opinion makes it crystal clear that corporations like Monsanto violate our right to live in a healthy environment and how they get around the international laws meant to protect people and planet.

“With the current wave of mega-mergers in the agribusiness sector, the biggest pesticide producers are becoming even more powerful. But so is our call to regulate them!

Please stop Monsanto from killing all that is natural with us and in our food! They have slowing killing us and all plant life with their meddling where they do NOT belong. Healthy food is hard enough to find in this day and age, and they brought suffering to a whole new level. Please STOP these people, I do NOT need or want them to handle/ alter / touch/ or even look at my food! Thank you!

I couldn't agree more. I am writing articles about this. Thank you for your work. Stop Monsanto!