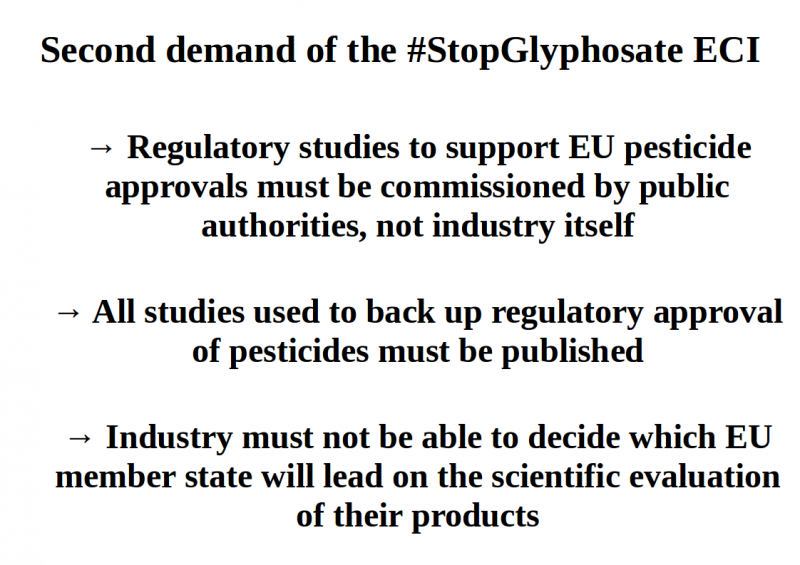 Beneath the Glyphosate headlines, a crucial battle for the future of EU pesticide approvals

“A non-re-authorisation of the substance would be a disaster for the industry”, reads a note from a a March 2016 meeting between pesticide industry lobbyists from the European Crop Protection Association (ECPA) and members of Agriculture Commissioner Phil Hogan’s cabinet.

The “substance” in question? Glyphosate, the active ingredient in Roundup, the world's most widely-used pesticide and Monsanto's flagship product. True enough, a European Union ban on this key ingredient in many weedkillers would be a major blow to the biotech and pesticide industry, its shareholders and its future owner Bayer.

Since the World Health Organisation's International Agency For Research On Cancer (IARC) declared glyphosate a probable human carcinogen in 2015, the decision as to whether this weedkiller deserves another license for the EU market has been closely scrutinised. In addition, lawsuits against Monsanto in the US regarding Roundup’s health effects have enabled the release of internal company documents, which show how the company ghostwrote studies signed by ‘independent’ experts and tried to underplay data indicating health damage.

The heightened scrutiny has also finally brought wider attention to some of the fundamental flaws in the EU's  pesticide approval system – precisely what the pesticide industry and government agencies have been fearing, as highlighted by lobby documents obtained by Corporate Europe Observatory. They seem to regard an evolution of the EU regulatory system for assessing pesticides towards more independence and transparency (and better aligned with the normal scientific methodology itself) as an outright threat.

For sustainable farming, public health and nature, a ban on glyphosate would be a leap forwards. On 23 October 2017 a coalition of civil society organisations handed over more than one million signatures to Vice-President of the European Commission Frans Timmermans and Health Commissioner Vytenis Andriukaitis, which had been collected from across the EU as part of a European Citizens’ Initiative. The demands: a ban on glyphosate-based weedkillers, crucial improvements to EU pesticide approval system, and support for farmers to transition to a non-toxic food production system.

On 25 October however, EU member states are voting on a proposal by the European Commission to give the weedkiller a license for another ten years with few restrictions. The temporary 18-month license extension, granted in June 2016, will expire by the end of this year, forcing a decision. But member states are divided and the Commission is not expected to gather enough support for its proposal.

'The system must be saved'

When the Glyphosate Task Force, led by Monsanto, learned that the Commission in June 2016 only wanted an 18-month extension of the license for glyphosate in order to await another opinion from the European Chemicals Agency ECHA, it labeled this a “dangerous precedent” and “a marked departure from science-based decision making”, ramping up the attack by calling the move “highly irresponsible and fundamentally irrational”.

The Glyphosate Task Force wrote: “The long term consequences of the current situation for the EU regulatory system should not be underestimated. In our view, a clear signal is now being sent that established rules and ways of reaching decisions can easily be side-tracked if special interest campaigns against modern technology and, in this case, modern farming, are allowed to unduly influence and politicise the application of EU rules. We would ask that reason and evidence should be the hallmarks of EU decision-making, rather than populism”. (Emphasis added.)

A “special interest campaign” targeting “modern technology”? In reality, what triggered the glyphosate issue is the fact that a highly respected scientific institution (IARC) concluded that an old pesticide from the seventies is a probable human carcinogen.

Big farm lobby COPA-COGECA sent a similar message to DG SANTE in March 2017: “Pressure from certain parts of the society through social media is putting this system more and more in question and undermines the confidence.”

On 19 October 2017 the European Parliament’s Environment Committee voted on a resolution that calls for fundamental changes in the way pesticides are approved. Ahead of the vote, the pesticide lobby group ECPA put an advertisement Politico which echoed: “Calling into question the approval process only serves to undermine consumer confidence in the EU food safety system, to the benefit of no-one.” 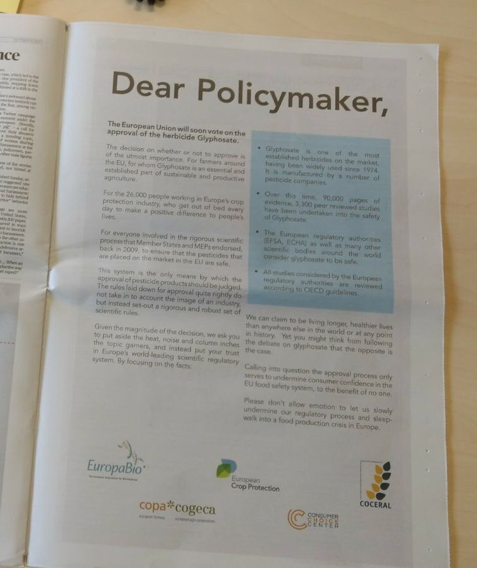 Interestingly, this ad was co-signed not only by the usual suspects, including EuropaBio, COPA-COGECA and grain traders’ lobby COCERAL, but also by a group called Consumer Choice Center (CCC). As Corporate Europe Observatory revealed recently, this grouping claims to represent consumers while it counts neoliberal US plutocrats and oil industry influencers the Koch Brothers among its main funders.

EFSA, BfR and DG SANTE getting nervous too

Four of the scientists who were involved in the IARC assessment had a meeting with Commissioner Andriukaitis on 22 January 2016. Several flaws in the EU system were discussed, such as conflicts of interest, and the way that the EU pesticide approvals process focuses on one active ingredient, whereas the final mixtures (formulations) sold in the shops remain under-researched.

But three days later, in an internal meeting of Directorate General for Health and Food Safety (DG SANTE) it was decided that a meeting would be set up between the German scientific agency Bfr and the Commissioner, “in view of dispelling the doubts as regards the regularity and robustness of the process”. Xavier Prats Monné (from DG SANTE) said shortly afterwards, in a meeting between DG SANTE and European Food Safety Authority (EFSA) staff that “SANTE and EFSA have to 'stick together' in general terms and in particular when the EU regulatory framework is questioned.... The joint aim now is to defend the EU system and to provide to the Commissioner the arguments to defend himself.”

And so it happened. In March 2016, Commissioner Vytenis Andriukaitis held a meeting with head of the German BfR, Andreas Hensel, who informs him that “glyphosate is in focus of extreme lobbying not only due to its link to biotech but also as a non-approval of this substance for safety reasons would not allow any other pesticides to be approved in future.”

The minutes do not further illuminate on the rationale for his argument. The EU pesticide legislation demands that pesticides that are for instance carcinogenic, toxic for the reproductive system, or hormone disrupting, to be banned; but other substances, even though toxic and harmful for many life forms, are not affected.

In this meeting Andreas Hensel also emphasised to the Commissioner alleged “disagreements inside WHO (IARC vs JMPR), which should be more highlighted in communication”. This alleged internal “disagreement” inside the WHO – widely picked up in media last year and which continues to create confusion – is entirely false (see Box). Though true that another panel (Joint FAO/WHO Meeting on Pesticide Residues, JMPR) connected to the WHO made an opinion related to glyphosate, it was of a very different kind than IARC (studying risks of exposure through diet, rather than its intrinsic hazardous properties). In addition, the person leading the JMPR work is also the Vice-President of ILSI Europe, an agribusiness and food lobby group.

German BfR head Hensel is a strong defender of the current EU system that he told the Commissioner is “most robust”. In the past he has breezily dismissed concerns over conflicts of interests, defending the fact that the pesticide committee of his agency Bfr includes Bayer and BASF employees (something that, in contrast, EFSA’s rules on conflicts of interest would not allow), explaining to German newspaper TAZ that facts about products “can only be judged by those that work with them”.

Following the release of the Monsanto Papers in March 2017, Monsanto was quick to call the European Commission’s department for health and food safety, DG SANTE. The person in the Pesticides and Biocides unit who picked up the phone noted down: “He [Monsanto representative, red.] said that some of the scientists who have been named in the released papers have already defended themselves against the accusations. He also mentioned that some of the named experts were under police protection following death threats.”

Some of the named experts, such as David Kirkland, have stated that Monsanto employees were being “naïve” when suggesting in internal emails they would be able to have him sign off on documents in fact produced internally by Monsanto – a defence Mr Kirkland brought up at the European Parliament hearing on the Monsanto Papers. Even if this were to hold true, Monsanto doesn’t come off looking much better. Who says their ghostwriting attempts were limited to the cases we now have information about? Another key figure named in the Monsanto Papers, the US Environment Protection Agency’s (EPA) Jess Rowland, has in the meantime become subject of an investigation by the EPA’s Inspector General.

If this week’s vote indeed fails to produce a majority for the EU Commission’s 10-year proposal, the EU institutions will need a plan B. If they opt for a phase-out of Roundup, it is vital to clarify that any re-authorisation only represents a transition period that will end in a ban of the substance. The glyphosate saga has also underlined the dire need to fundamentally strengthen the EU approval system and has shown just how important it is to provide all necessary support to farmers to help them make the transition to a pesticide-free agriculture.

All of these demands are at the core of the European Citizens’ Initiative StopGlyphosate, which has been supported by over 1,3 million EU citizens from across Europe and was handed over to the European Commission on 23 October. On 24 October the European Parliament voted a resolution making similar demands. And on 12 October, the French tribunal of Foix sent four prejudicial questions to the European Court of Justice, that also question the reliability of the current EU pesticide risk assessment. The need to change the way pesticides are approved can no longer be ignored.