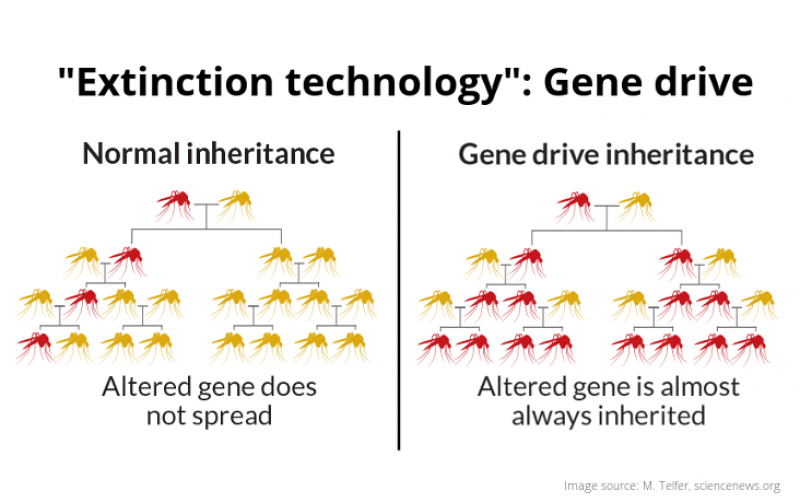 This week, a UN expert group is meeting to address issues around so-called gene drives, a highly controversial genetic extinction technology with potential applications for agricultural, conservation or military use. The expert group (officially the Ad-Hoc Technical Expert Group, AHTEG, on Synthetic Biology) is convened by the UN Convention on Biological Diversity (CBD).

One day ahead of the meeting, a large set of documents has been released, which show how this UN expert group process is being influenced by a covert operation run by a Gates-funded lobby firm. Following Freedom of Information requests by U.S.-based researcher Edward Hammond of Prickly Research, a large set of emails, the Gene Drive Files, was obtained. The correspondence reveals how external actors with a vested interest in the development of gene drives have organised amomg themselves to influence the work of the relevant UN expert group. The publication of the Gene Drive Files provides crucial and very worrying insights into these influencing attempts of the only UN process adressing this controversial but rapidly developing new technology.

Civil society organisations, including Corporate Europe Observatory, have sent a letter to Dr. Cristiana Paşca Palmer, Executive Secretary of the Convention on Biological Diversity, calling for urgent measures to address conflict of interest in the CBD, its Protocols and subsidiary bodies.

The deployment of gene drives can have vast ecological and societal consequences. One year ago, on 5 December 2016 170 groups from across the globe called on the Parties to the Convention on Biological Diversity to put in place a moratorium on the development, experimental application and environmental release of gene drives. New GM technologies like CRISPR are being used to have genetic modifications, like infertility, into organisms that will spread to all next generations. In this way, entire species could be wiped out.

The documents show that public affairs firm Emerging Ag was hired with funds from the Bill and Melinda Gates Foundation to co-ordinate the "fight back against gene drive moratorium proponents.” Emerging Ag’s project - dubbed the “Gene Drive Research Sponsors and Supporters coalition” - was co-ordinated amongst others by three members of the UN expert group itself, who represent academic institutions. These members through their employers have financial interests gene drive development, which have not been declared.

Emerging Ag president and founder Robynne Anderson is a former communications director of CropLife International, an international lobby group for the biotech and pesticide industries. Emerging Ag's staff are spread over several continents; Vice President Strategy, Isabelle Coche, is based in London. Her role is laid out in an introductory message saying:

"Isabelle will be working on efforts to get a broader scientific perspective represented in these discussion. She is looking for a few good scientists who have a broad perspective on the issues around gene drive and are mature enough to be able to deal with the kinds of conversations that can arise within the CBD arena. Isabelle would like the chance to explain what this all means and what activities will be needed to fight back against gene drive moratorium proponents before the next CBD meeting in 2018. Ultimately she is looking to get some volunteers to help in the cause. I hope you will all be interested enough to get back in touch with her to learn more about what this might entail. I’m sorry to say that these next few years are going to be critical and we are going to have to take the fight outside the laboratory.” 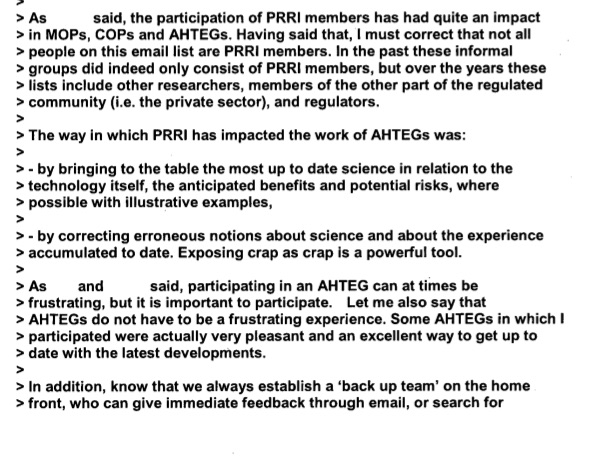 The Gene Drive Files reveal that Emerging Ag has also been collaborating with biotechnology lobby group Public Research and Regulation Initiative (PRRI), which runs a similar influencing operation. Piet van der Meer, a guest lecturer at Ghent University, explained in another batch of emails obtained from the Canadian government, how PRRI provides “back up team” assistance during UN talks to “like-minded” government and industry experts that are member of the UN expert group. A former Dutch government official, Van der Meer founded PRRI in 2004 with the stated goal to defend the interests of public researchers on biotechnology regulation issues. The group’s positions are closely aligned with those of industry.

Van der Meer claimed that "the participation of PRRI members has had quite an impact on COPs, MOPs and AHTEGs" of the Convention on Biological Diversity, and indicated that PRRI runs email lists on several topics for its members, mixing in industry lobbyists and government officials.

In an email dated 13 July 2017, which was sent to a long list of adressees, PRRI's Piet van der Meer attempts to co-ordinate lobbying efforts on different topics relevant for the UN CBD negotiations across industry-linked platforms. The list includes delegates of PRRI and ISAAA (another biotech industry-funded body), Emerging Ag employees, but also Sense About Science UK and ILSI (International Life Sciences Institute, an industry-science platform).

The Gene Drive Files also show that the U.S. Military is taking a leading role in pushing gene drive development. The U.S. Defense Advanced Research Projects Agency (DARPA) has given approximately $100 million for gene drive research. The emails furthermore reveal that the VP of Global Biotechnology for Monsanto was invited to give a presentation at a two-day meeting to initiate a classified gene drive study by the secretive JASON group of military advisors. Target Malaria, a gene drive project based at Imperial College in the UK, gets DARPA funding, however this was not disclosed.

“Gene drives are a powerful and dangerous new technology and potential biological weapons that could have disastrous impacts on peace, food security and the environment, especially if misused,” said Jim Thomas of ETC Group. “The fact that gene drive development is now being primarily funded and structured by the US military raises alarming questions about this entire field.”