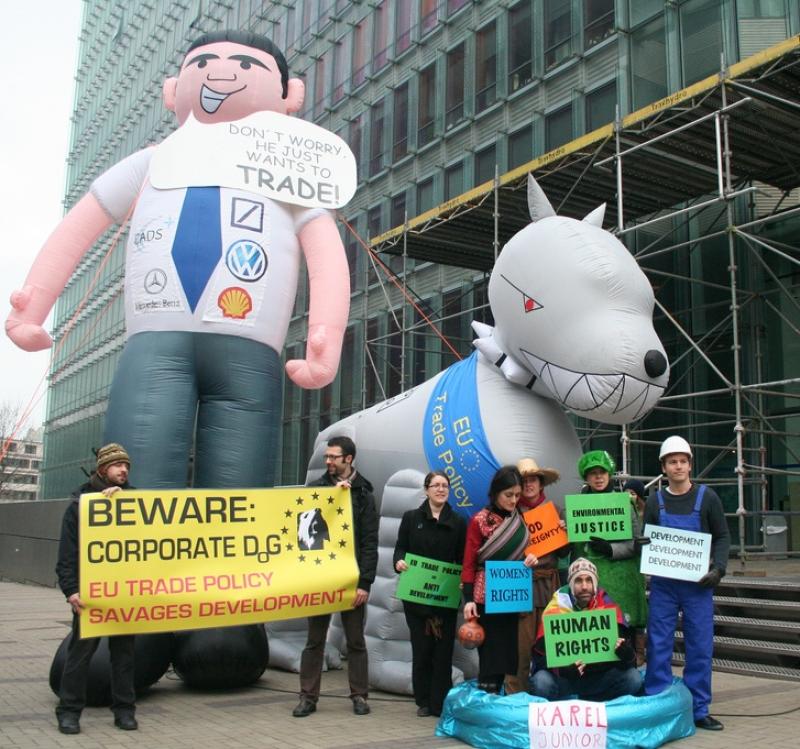 The Belgian trade Commissioner Karel de Gucht distanced himself from a blind belief in free trade and open markets as ends in themselves during his hearing in the European Parliament, arguing instead that trade must be a tool to generate prosperity and development. This month, De Gucht’s department held a conference on the EU's trade relations with developing countries.

So, has DG Trade finally become a spearhead for development? Unfortunately, de Gucht's performance in office suggests not, which is why NGO organised a protest action outside DG Trade's development conference (see press release and pictures of the action).

Shortly after he was approved by the European Parliament, de Gucht sealed trade deals with Peru and Colombia. These have come under fire from development groups for threatening people's access to essential medicines, water, land as well as key biodiversity and forest resources. Trade unions and centre-left MEPs were particularly outraged about the deal with Colombia, a country where the repression, harassment and murder of indigenous people, trade unionists and human rights activists are daily occurences. But de Gucht seems to have ignored their concerns.

His next step was a trip to Asia, where he continued the Commission's tradition of breaking up country coalitions in the South and pushing for bilateral talks to avoid potential problems negotiating with the regional bloc. Development groups have repeatedly criticised this divide and rule tactic for hampering integration and development in regions such as the African, Caribbean and Pacific group (ACP) and the Andean region (Bolivia, Colombia, Ecuador, Peru, Venezuela and Chile). Now they can add the Association of South East Asian Nations (ASEAN) to their list as de Gucht managed to convince Vietnam to launch bilateral talks with the EU.

Had the Trade Commissioner listened to people's organisations and social justice networks across Asia he might not have opted for this step. But de Gucht did not use his trip to meet up with them. Instead, he spent his time with big business – the European Chamber of Commerce in Vietnam and the industry lobby group FICCI in India.

Unfortunately, DG Trade’s conference on EU trade policy towards developing countries displayed a similar ignorance towards the vulnerable groups in society that should be at the centre of EU trade policy. Amongst the more than 30 speakers at the event, there were none from grassroots development, farmers', indigenous or women's groups. The programme listed only one speaker from a development NGO, one from the Commission's development department and a single official from a developing country. On the other side, the European employers' federation BusinessEurope – which seems to see trade and development as equating to plundering the South's natural resources was given the floor. Alongside the ultra-liberal think tanks which do indeed consider free trade an end in itself.

So, is this what development looks like, Mr. de Gucht? I'm afraid, I'm not convinced.