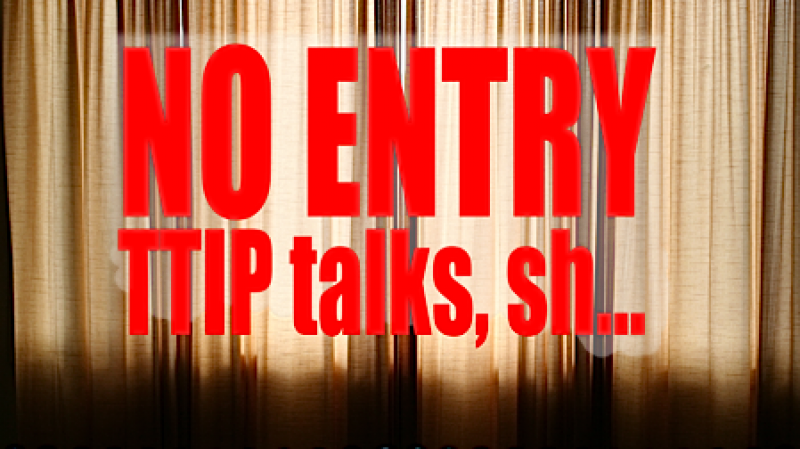 More than 250 civil society organisations and networks have today called on the European Commission to open up the EU-US trade negotiations for public scrutiny. The fifth round of negotiations on a Transatlantic Trade and Investment Partnership (TTIP) begins today in Washington amid growing frustration at the secrecy of the process. Corporate Europe Observatory is one of the groups endorsing the call for openness.

The undersigned organisations are writing to express deep concerns about the lack of transparency around the ongoing trade talks on a Transatlantic Trade and Investment Partnership (TTIP). We are calling on you to open the negotiation process to the public, by releasing the negotiating mandate, documents submitted by the EU, and negotiating texts.

The European Commission has repeatedly stated that trade and investment between the European Union (EU) and the United States (US) are already highly integrated, and that the main focus of TTIP will be to achieve regulatory convergence by removing so-called non-tariff barriers to trade. This means that the outcome has much less to do with traditional trade issues such as tariffs, than with the regulations and standards that apply in the EU and the US and that affect every single aspect of citizens’ daily lives – from the quality of the food we eat to the safety of chemicals we use, the energy we consume, or the impact of financial services on each of us.

Civil society groups in the EU and in the US have voiced concerns that this might lower standards and remove safeguards across the board. They have requested greater transparency about the negotiations to address these concerns. The setting up of a stakeholder advisory group for the negotiations by the EU – although an improvement compared to previous negotiations – is far from sufficient to make the process fully transparent. Members of the group will have limited access to the negotiating texts under strict confidentiality rules, and these will remain out of reach for the rest of interested civil society groups and citizens.

The European Commission has argued that secrecy in this process is inevitable because this is a matter of international relations. If these negotiations are intended to affect domestic regulations, standards and safeguards on each side, then citizens have the right to know what is being put on the table, and how this is being negotiated. The standard legislative process in the EU allows for public scrutiny of each step of policy-making as well as full involvement of the European Parliament. We would urge that those negotiations should comply with the same level of openness. The process should also allow for public accountability of the European Commission for the negotiating positions that it takes. Given that many of the issues under negotiation relate to the environment, this would also reflect the EU’s obligations under Article 3(7) of the Aarhus Convention to promote access to information, public participation and access to justice in international environmental decision-making processes.1

Furthermore there are several examples of international negotiation processes, which provide a greater degree of openness to civil society than the negotiations on TTIP do, and whereby negotiating documents are disclosed.

With this letter, we would like to restate our call for openness and public accountability of the TTIP negotiations. Without full transparency, there can be no meaningful engagement of civil society representatives in the process.

Basic transparency requirements include making the following available for the public at the earliest possible stage and at regular intervals:

If the European Commission is serious about openness and engagement of the public, it should also proactively make the following available:

Read the full letter with all the signatories here.