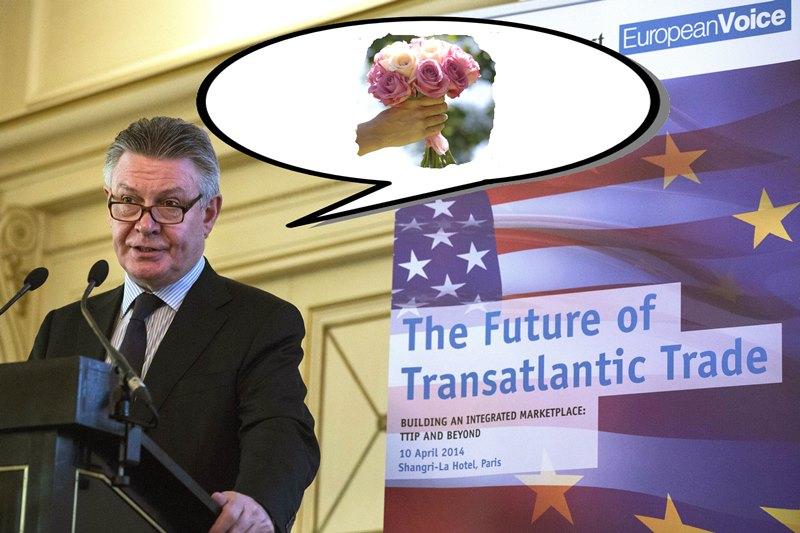 An internal document shows the Commission and Council have initiated a coordinated “information campaign” on TTIP. But one thing is missing.

Are you one the many thousand activists who are campaigning on TTIP? Have you received an invitation to a meeting with government representatives? Or has a representative from the Commission invited you to a debate? If so, don’t feel flattered. It is unlikely because they feel your arguments are interesting, but rather is probably part of a big campaign launched jointly by the Commission and member state governments. The objective is really very simple: to win you over, refine their strategies against you, and ultimately to save TTIP from the rapidly evolving public skepticism.

Already back in November 2013, representatives from member states asked the Commission to come up with a communication strategy on TTIP – feeling the weight of criticism and political pressure building up at the time. According to a new internal document from a meeting in a Council working group (2)(“the Working Party on Information”), the Commission has come quite a long way, and now has a ready toolbox of communications tactics they can present to bewildered civil servants. These include seminars, conferences and other public events which “in particular at the moment when there are fierce demonstrations against the TTIP, can help citizens better understand the issue”, as they put it. Also, it includes journalist seminars and other media strategies, exchanges between the Commission and member states and among member states on “best practices”, i.e. good communication tricks. Furthermore, should the member state authorities need it, each national level representation of the Commission “has a TTIP expert who is able to help Member States' authorities communicate on the TTIP and organise tailor-made communication activities.”

And member states themselves have long ago started to chip-in with – among other things – “structural exchanges of information (studies, surveys etc.).” , and in most places a high degree of coordination with pro-TTIP groups, big business groups mainly.  And more ideas are in the making, such as joint monitoring of “the development of public opinion on the TTIP” and the development of “micro-examples and real stories referring to future benefits” to be shared among member states’ authorities.

Reading the document might produce a disconcerting lump in the throat of anyone who knows what a threat the TTIP poses: Although the people at the meeting moaned about lack of resources, the apparatus they can put in motion is considerable.  What they lack however, is something else: a strong case.  The basic assumption behind the campaign is that “public misperceptions” need to be confronted – or as former Trade Commissioner Karel de Gucht has said repeatedly: “they [NGOs and opposition MEPs] are lying” (3). Though some parts of the media have proved willing to put decent journalism to one side, and merely convey the official message of the Commission, there is a chance the whole effort will fail miserably. They are not refining their arguments, but are trying to figure out ways to repeat the same message about the alleged benefits while denying any downsides. That formula will hardly convince anyone. Not at dialogue meetings in Brussels or in national ministries.

You can find the Council document online here

"Propaganda" is such an ugly word. Oxford says: Information, especially of a biased or misleading nature, used to promote a political cause or point of view. Well shit.
My student organisation managed to invite the Dutch head of North American Affairs and an American diplomat currently stationed in the Hague to give their view on the TTIP-issue and answer questions of us students. Little did they expect of the criticism they were hit with, after they had talked relentless 75 minutes, introducing lots of information of a biased and misleading nature, to promote their one important message: don't worry, its good for you! This was literally the conclusion. Judging the content of the speakers' presentations, they must have expected a bunch of clueless, apolitical kids. Many students however came in prepared, with concrete numbers, provisions and studies. Instead of engaging into a real debate, responding to our honest fears and suspicions, the tactic was clearly as described in the article above: "no, you are dramatizing, it's normal to be protective against something new, but this is going to be the next big thing for all of us". It was the single, most frustrating lecture/question time I have ever attended.