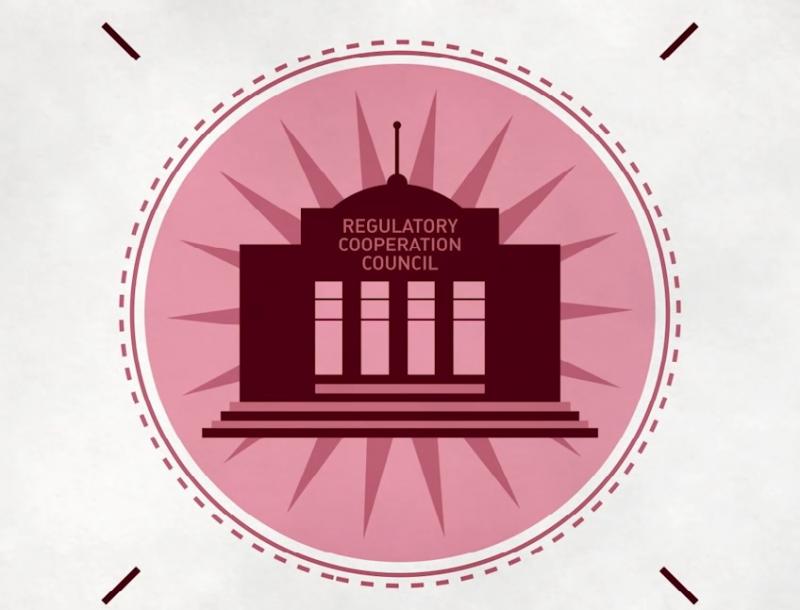 A new leaked proposal from the transatlantic trade treaty negotiations (TTIP) shows the European Commission seemingly unstoppable in its drive to constrain regulations to protect the public interest – including potentially those made by regional authorities.

Since December 2013, NGOs, social movements, and politicians have harshly criticised the European Commission's (EC) proposal on 'regulatory co-operation' 1in the Transatlantic Trade and Investment Partnership (TTIP). They argue that a position paper, leaked back then, suggested the Commission was opening the door to massive influence by big business over future laws. Now, a leaked document shows the Commission is maintaining its course – nothing suggests it is taking civil society concerns into account2. In a previous document from December 2014, the EC goes even further, suggesting limiting the policy space of municipalities and local authorities – though this idea is under fire and might not be part of the EU position, it is a sign that regulatory co-operation could prove to be not only very comprehensive, but outright dangerous to democracy.

The purpose of regulatory co-operation

'Regulatory co-operation' describes a process of aligning existing regulations on both sides of the Atlantic to ensure that goods produced on one side can be exported to the other without special additional requirements. In practice this could affect rules on everything from food standards to chemical safety. In effect it is a highly strategic proposal to resolve some of the most controversial aspects of TTIP after the treaty has been finalised and public scrutiny has waned, with ample opportunity for big business to input on the new rules. Yet all along, the Commission has argued that its proposal for regulatory co-operation in TTIP is nothing more than a rational dialogue, for example to avoid duplication of laws on both sides of the Atlantic, and that it would not restrict the ability of regulators and legislators to pursue public interest objectives. It has also stressed repeatedly that its proposals would not give special treatment to business groups.

Nonetheless, this rhetoric has never allayed concerns, as there was always a gap between the Commission's documents for public consumption, and the actual texts from the negotiations that have emerged via leaks. And the recent leaks of new proposals from December 2014 and January 2015 not only confirm the validity of the criticism; on a couple of points they show that the true negotiating position is even worse than critics imagined. And since the current document is a legal text, whereas the former was a mere position paper, it seems the EU negotiators have consolidated their position on the matter.

Regulatory co-operation is dear to the hearts of the big business lobby groups on both sides of the Atlantic. In late 2012, BusinessEurope and the US Chamber of Commerce had several meetings with the EU Commission to push their proposals. They understand it as an ironing out divergence in laws in the long term – be it in food standards, chemicals approval, or rules on production methods, to name but a few.

This is to be done via a series of procedures, including co-operation between “regulators”. It is promoted as a solution to the problem that agreeing on harmonised standards or mutual recognition of standards can prove difficult in the short term. Consequently, on issues such as food standards, chemicals and financial regulation, because negotiators might not be able to strike a deal on common rules between the US and EU while the trade negotiations are under way, regulatory co-operation can provide a space for business groups and regulators to reach results to their liking after TTIP is agreed, in the long term and without much public scrutiny.

Regulatory co-operation is set to work at two different levels: a sector level (eg approval of chemicals), and horizontal rules that apply to all areas. The two business lobbies mentioned above have been particular active in formulating the horizontal rules, the topic of the two leaked documents. These proposals are very broad in scope, as they address both laws and regulation.

The two groups presented the Commission with a series of proposals at the 2012 meetings, which in sum would enable them – in their words – to “co-write regulation”. Bearing this in mind, it is no surprise that the strong similarities between the Commission's proposals and those of the industry lobbyists sparked a backlash against the onerous privileges being awarded to business groups.

The so-called 'stakeholders' in regulatory co-operation

That is not to say that no other groups will be involved in regulatory co-operation. When the Commission talks about the involvement of interest groups in regulatory issues, it uses the neutral term “stakeholder”. This refers of course to all kind of stakeholders, including trade unions and environmental groups. However, if one bears in mind that the overwhelming majority of lobbyists in Brussels represent business, then it becomes clear that involving stakeholders is another expression for opening yet one more avenue for corporate lobbyists to influence policymaking. Past experiences of involvement of “stakeholders” in “regulatory co-operation” between the EU and the US have demonstrated that these procedures are easily open to big business and often closed to other interest groups. And last, but not least: the agenda of regulatory co-operation is first and foremost about promoting trade – not about securing consumer rights, public health, or any other public policy objective.

The European Commission stands its ground

With regulatory co-operation, business groups will be provided with a series of tools that will enable them to influence the outcome of new laws, new regulation, and even existing ones. When the new text is read from that perspective, there is no change for the better. Maybe even the contrary. The thorny sides of the recently leaked proposal can be described in four points:

According to the proposal, as soon as a new regulation is in the pipeline, businesses should be informed through an annual report, and be involved. This is now called “early information on planned acts”, until recently called “early warning”. Already at the planning stage, “the regulating Party” has to offer business lobbyists who have a stake in a piece of legislation or regulation, an opportunity to “provide input”. This input “shall be taken into account” when finalising the proposal (article 6). This means businesses, for instance, at an early stage, can try to block rules intended to prevent the food industry from marketing foodstuffs with toxic substances, laws trying to keep energy companies from destroying the climate, or regulations to combat pollution and protect consumers.

New regulations should undergo an “impact assessment”, which would be made up of three questions (article 7, reduced from seven in the earlier proposal):

- How does the legislative proposal relate to international instruments?
- How have the planned or existing rules of the other Party been taken into account?
- What impact will the new rule have on trade or investment?

Those questions are primarily tilted towards the interests of business, not citizens. Thanks to the “early information” procedure, businesses can make sure their concerns are included in the report, and should it go against their interests, the report will have to cite a detrimental impact on transatlantic trade.

3. Regulatory exchanges – dialogues that would help businesses have it their way

The model presented by the EU negotiators gives big business many tools that will allow them to complain about an “envisaged or planned regulatory act”, and regulations under review (article 9 and 10). In particular, a “regulatory exchange” must take place if a Party is unhappy with the effect of a proposed rule on its trade interests. A dialogue will have to take place, and the Party whose rules are under attack, must co-operate, and must be prepared to answer any given question.

In the earlier proposal, the position paper from 2013, it was spelled out that in the case that EU-member states are about to decide on new rules that would affect trade, a dialogue has to take place in order to “effectively resolve problems”. In the new proposal, the modus vivendi in such a scenario is left open.

“Regulators” will get the key role. On the European side, this will be the European Commission, on the US side it will be representatives from the so-called Office of Information on Regulatory Affairs (OIRA) – according to the position paper from December 2013.. With close co-operation already well established between businesses and regulatory agencies in both the EU and US, this empowering of regulatory bodies would help ensure stronger business impact on policy.

Regulatory co-operation will address not only new regulation, but also existing rules. Consequently, so moving towards “regulatory convergence” is a very big project. It is the responsibility of the RCB to make sure the whole process of convergence between US and EU regulations moves forward, be it by making sure rules on harmonisation or “mutual recognition” are produced and adopted, or by launching proposals to solve differences in particular sectors. When doing the latter, it can build on the work of “sectoral working groups”, at an earlier stage identified by the Commission as a type of group where business can get “privileged access”. Another option for business is simply to develop their own proposals – proposals which the RCB would then have to consider seriously (article 15).

The RCB is set to become a powerful body, though it will not be able to adopt legal acts itself. But the proposal is not clear on the division of competences between elected bodies – whether parliamentary or governmental – and the RCB itself. It merely mentions a so-called “Joint Ministerial Body” to which the “Regulatory Co-operation Body” must report.

There seems to be few limits

Clearly, the Commission is going for a very ambitious proposal, regulatory co-operation is to have teeth, and it is to cover a vast area of policy making. If it were up to EU negotiators alone, regulatory co-operation would even cover municipalities and regional authorities. In the proposal from December 2014, the Commission suggests, “the Parties shall endeavour to ensure compliance with this Chapter by authorities at levels of government lower than EU Member State or US State level,” ie. municipalities and regional authorities. This would broaden the scope of regulatory co-operation considerably, and could affect city planning, public procurement, natural resources, and environmental policies at the local level.

So far, however, it seems the Commission has been turned down by member states, and this proposal is – for the moment – off the table. In the latest document, the text on regional authorities has been stricken or watered down considerably, allegedly due to opposition from some member states.

Regulatory co-operation is a threat to democracy

In sum, regulatory co-operation deserves all the attention it can get from NGOs, social movements, and not least, from legislators across Europe whose future influence will, de facto, be limited by regulatory co-operation. The documents known to the public so far tell a story of negotiators trying to modify decision-making processes to enhance trade and investment with little regard for the consequences to our democratic institutions. In fact, they are suggesting complex procedures to fit businesses interests. The claim in the Commission's fact sheet that the “right to regulate in the public interest” is safeguarded has little root in the reality of its leaked document. The latter shows that the scope of regulatory co-operation in TTIP might even endanger the right to regulate at the municipal and regional levels.

Is there still such a hing as democracy!?
Seems to me politicians are noting more than puppets these days stringed to big corps already.

Oil thicker than water, greed has no break lights.