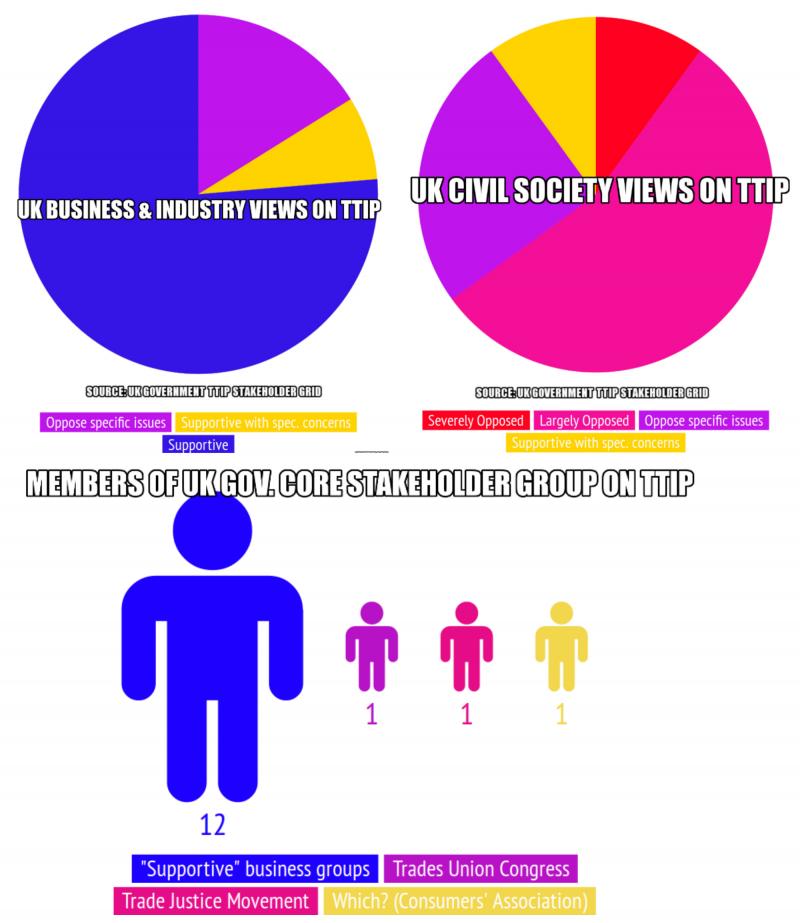 Which groups are lobbying the UK government on TTIP?

Corporate Europe Observatory analyses the UK government's grid of stakeholders working on TTIP which clearly illustrates how the forces for and against the EU-US trade deal are shaping up.

What unites the British Egg Industry Council and the social justice organisation Global Justice Now? And what puts consumer group Which?, food giant Tate & Lyle, and alcohol producer Diageo in the same camp? It is TTIP of course, the Transatlantic Trade and Investment Partnership deal, which is currently being negotiated between the European Union and the US. According to a stakeholder map put together by the UK government and released to Corporate Europe Observatory (CEO) under Freedom of Information rules, the British Egg Industry Council and Global Justice Now share opposition to the deal, while Which?, Tate & Lyle and Diageo are broadly supportive.

The UK government's grid of 120 stakeholders is interesting reading for anyone following the debate on TTIP, which is predicted to become the biggest trade deal in the world. The deal aims to remove ‘non-tariff barriers to trade’ which would benefit big business, but threatens to undermine safety regulations, workers’ rights, environmental protection rules and food standard regulations. If the stakeholder grid is taken at face value and as being an accurate reflection of the current views of specific organisations, it clearly illustrates how the forces for and against TTIP are shaping up in the UK.

Of the 120 stakeholders featured in the grid, at least 90 represent business or industry interests and of these, 85 per cent are listed as being supportive of TTIP. Of the trade unions featured, all are listed as opposed to TTIP. And of the NGOs, charities and the rest of what could be broadly called civil society, all are recorded as either “largely opposed” or “severely opposed”. According to the grid, the only exceptions to this are BEUC (the European consumers' organisation), the Consumer Federation of America, and Cancer Research UK, which are listed as having a “balanced [view] with specific concerns”; Consumer Futures (no specific view attributed); and of course Which?, BEUC’s UK member. In fact Which? is listed in the grid as saying it is “supportive [of TTIP] with specific concerns” and the accompanying notes state that it has “produced various briefings on TTIP, Chief Exec has said he is happy to be an advocate for TTIP, cochaired Consumers roundtable with Ken Clarke” [then UK government minister].

Pro-TTIP business interests include the major multinational corporations Shell, GlaxoSmithKlein (GSK), PWC (formerly PriceWaterhouseCoopers), Ford, General Motors, Statoil and many others with clear business interests in both Europe and the US and who are likely to support anything that will help them to reduce their costs and grow their profits.

Meanwhile, the business and industry groups that are opposed to TTIP, or at least specific elements of it, are exclusively trade associations in the food and agriculture sector such as the British Egg Industry Council, Dairy UK, Quality Meat Scotland, Rice Association, Seafish and others. Some of these will represent major players in the industry, but some also represent smaller businesses. Their concerns about TTIP are likely to relate to whether it will introduce a race to the bottom in terms of standards which would see better quality producers losing out; and whether they will face unfair competition from imports of US products which do not meet EU food safety standards (the now infamous chlorinated chicken and hormone beef cases).

The specific reason why the UK government produced this grid is not clear, nor is it clear when it was produced, but it is true that TTIP is a priority for UK government ministers and there is a cross-departmental team which is spearheading its efforts. As part of this, the UK government holds regular discussions with groups with an interest in TTIP, although it is clear that it speaks to some groups rather more than others.

Taking the information in the grid, it is clear that the UK government has held roundtables looking at the issues of public procurement, professional business services, automotives, chemicals and small and medium businesses (SMEs) within TTIP. If the grid's information is full and correct, no NGO or trade union attended these roundtables and even among the business interests, there were no dissenting voices present.

The consumers roundtable did involve civil society in the shape of BEUC, Consumer Futures, and Which?. Sitting alongside these organisations were GSK, Boots (major UK retail brand), eBay, UPS (United Parcel Service of America) and FIPRA (wrongly listed as a think-tank and, in fact, one of the largest lobby consultancies in Brussels). It is not clear that there were any strongly dissenting views present in this forum.

In fact the only sectoral roundtable where there seems to have been a clear mix of pro and anti-TTIP interests represented is that on agriculture and food and drink. But even on this group, Compassion in World Farming was the only NGO to be invited, according to the information on the grid.

The overarching core stakeholder group on TTIP, set up by the UK government, which meets after every negotiating round, brings together major business interests and it is worth listing them all: Association of the British Pharmaceutical Industry, British Chambers of Commerce, BritishAmerican Business, Chemical Industries Association, Confederation of British Industry (employers), EEF (manufacturers), Federation of Small Businesses, Food and Drink Federation, Institute of Directors (bringing together business leaders), International Chambers of Commerce UK, the Scotch Whisky Association and the financial services lobby TheCityUK. Sitting alongside them is the Trades Union Congress (representing a trade union movement of 5.8 million working people), the Trade Justice Movement (an umbrella campaign group uniting NGOs working on trade policy), and, of course, Which?.

It is clear that of the stakeholder roundtables referenced in the grid, NGO involvement has been limited. Civil society organisations including trade unions and NGOs are invited to “NGO stakeholder meetings” which tend to focus on (limited) updates about the latest state of play in the negotiations.

It is clear that there is substantial opposition to TTIP and to some of the specific measures that are being negotiated within it. A community petition against TTIP and CETA (the EU trade deal with Canada) has attracted the support of over 1.5 million European citizens, including over 200,000 from the UK alone.

The UK government's stakeholder grid makes it clear that it is aware of opposition to TTIP. But just like the European Commission, it does not seem to be listening.