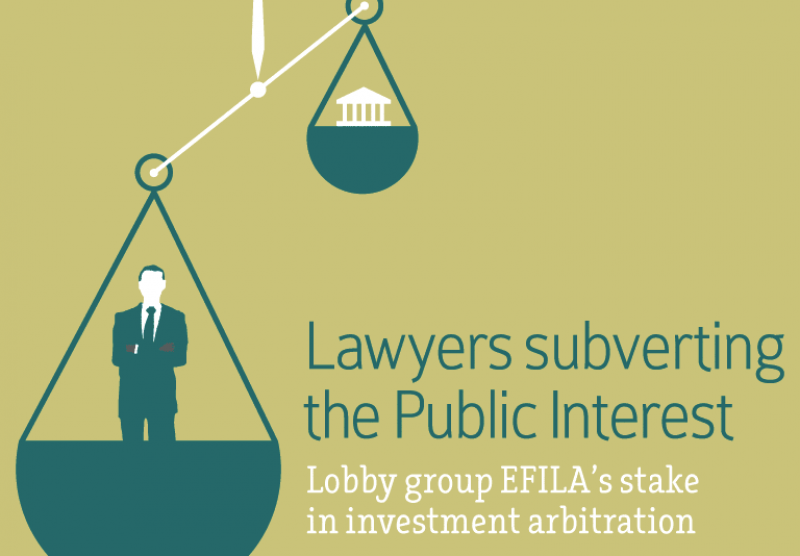 In response to the criticism of the controversial investor state dispute settlement (ISDS) in the proposed EU-US trade deal TTIP, a number of law firms recently founded a think tank designed to protect the current investment arbitration system: the European Federation for Investment Law and Arbitration (EFILA). This is not surprising - the law firms and corporate lawyers who are the main beneficiaries of the booming investment arbitration system stand to gain if ISDS is included in TTIP.

In January 2015 the European Commission published the first results of a public consultation with the highest number of responses in the history of the EU – more than 145,000 submissions by citizens. What had raised the interest and opposition of so many European citizens? A secretive legal system that had been virtually unknown to the general public a few years ago: the investor-state dispute settlement mechanism, or ISDS.

Within only a couple of years, ISDS had turned from a system known only to few legal specialists to the most hotly debated topic of the proposed free trade agreement between the EU and the US – the Transatlantic Trade and Investment Partnership, TTIP.

Critics have pointed out the many flaws of the ISDS mechanism that allow corporations to sue governments for regulations and laws passed to protect people’s health and the environment. Political groups in the European Parliament and national governments have called for the exclusion of ISDS from the EU-US trade agreement.

The debate has not passed unnoticed by the law firms and corporate lawyers who are the main beneficiaries of the booming investment arbitration system and stand to gain if ISDS is included in TTIP. In response to the criti- cism of the ISDS system, a number of international arbitration law firms recently founded a think tank designed to protect the current ISDS system: The European Federation for Investment Law and Arbitration (EFILA).

While EFILA’s stated aim is to “foster an objective debate” around ISDS, the law firms that founded it and the individuals on EFILA’s boards have clear vested interests in the current investment arbitration system – leading to serious doubts that its policy recommendations will be little more than pro-arbitration industry propaganda.

EFILA seems to be an exemplary case of a special interest group, trying to protect and expand a system highly beneficial to its members at the expense of the general public. A broad group of public interest advocates, ranging from consumer organisations and trade unions to environmental NGOs and public health groups, have spoken out against ISDS. Businesses, governments and academics, too, have called for the exclusion of ISDS from TTIP. EFILA’s position thus seems to solely represent the interests of the investment arbitration industry.

This briefing takes a closer look at EFILA, and the law firms and individuals linked to it, to show that EFILA represents an attempt by the arbitration industry to fend off public pressure and much-needed changes to the current system of international investment law.

Interesting contribution. I have myself written on investment arbitration.