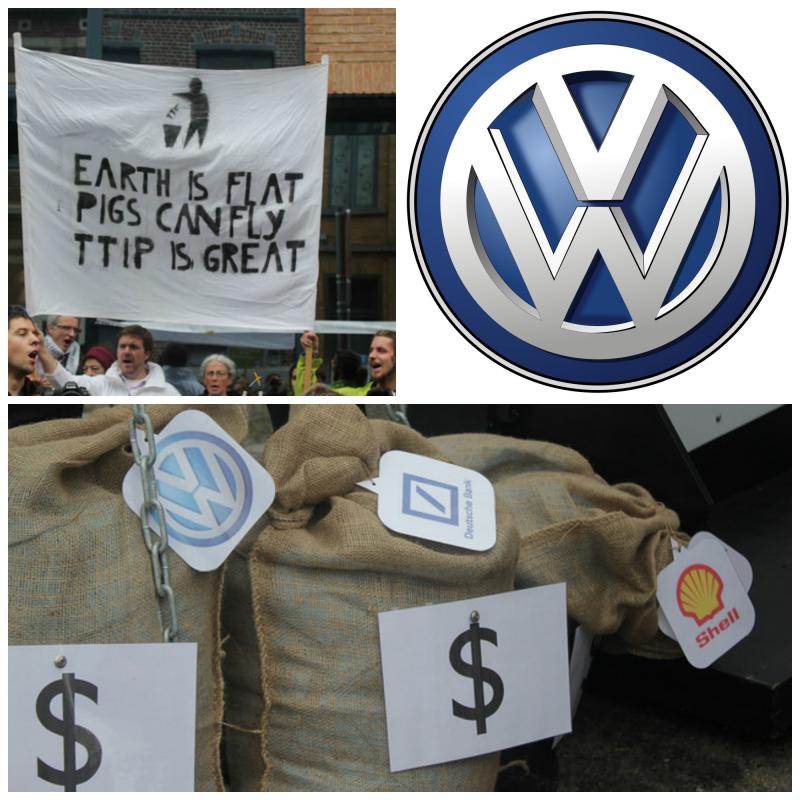 Despite the scandal surrounding Volkswagen’s rigged pollution measuring equipment and the flawed EU car test regime, the proposed EU-US trade deal (the Transatlantic Trade and Investment Partnership, TTIP) is set to include rules on tests that could make a solution more difficult. EU negotiators are even moving in tandem with the very car industry that just lost all credibility.

The first victim of the Volkswagen emission's testing scandal was the credibility of the car industry. Who now would believe a word from a car makers mouth when it comes to issues of public interest such as pollution and car safety? And how about the regulators that chose to turn a blind eye? While the full consequences are yet to be determined, the scandal should impact on the TTIP negotiations as well, where – so far – negotiators have put their trust in car industry lobbyists to frame their agenda.

From the very beginning of the negotiations, the car industry has been one of the top priorities for both the US and EU, and one that the negotiators did not expect to lead to major complications. “Technical issues”, such as differences in testing procedures, were to be solved with relative ease, paving the way for more cars to be traded both ways. The slogan of the car industry is “tested once, approved everywhere”, and that has gone down well with the negotiators. But knowing how tests can be deliberately fraudulent, the slogan sounds even less convincing than a short while ago. The question is whether the Volkswagen scandal will 'Ttip' the scale.

European and US car giants have complained for many years that divergent regulations work as a impediment to the car trade across the Atlantic, and with the advent of the TTIP negotiations, they were among the first to flesh out their agenda. The British House of Lords have even praised the automotive industry for being “organised and vocal” on the subject. True, the agenda of the automotive industry has been clear from the outset, as to them the TTIP should be about keeping regulation at bay, adopting the same standards – “harmonization" – or even more easily simply by recognizing the other sides’ standards as equivalent (mutual recognition). The latter, preferred approach, is expressed in the slogan of industry: “tested once, approved everywhere”, or “approved once, approved everywhere”.

This agenda is shared by industry on both sides, not least by corporations such as Volkswagen. On many occasions the Commission has stressed to European car lobbyists, that they should elaborate common demands with their US counterparts. In reality, the car lobbies on both sides shared the same position from an early stage. They have produced a very specific list of areas where they would like to see negotiators to do away with the existing divergent standards through mutual recognition. On all the points on the list, they aim to cut “red tape”. Approved on one side of the Atlantic would mean no need to go through procedures on the other side.

The danger with 'mutual recognition' of each others' auto rules, is it puts the lower standard on an equal footing with the higher standard. It allows industry to pick the cheapest, less stringent option.  And with a trade agreement such as TTIP, industry will be given all the chances in the world to prevent stronger regulation. Should one party want to strengthen control, it could be stopped by the other. And if one side has more ambitious rules than the other, it is bound to cause a stir with local industry, which would quickly start demanding a review so as not to lose ground in competition. That’s why environmental standards for cars were always very sensitive at the negotiations, as they differ considerably.

Considering how badly the EU has fared with its emissions rules so far, is it a good idea to put the entire testing regime on the trade negotiations table? As far as industry is concerned, it is. The testing of emissions from vehicles made it to the very specific TTIP wish list of  the car industry well before negotiations were even started, and it has full support in the car lobby, stretching from the two main car lobby groups on the two sides – AAPC from the US and ACEA on the European side – to the suppliers of parts, to the so-called Auto Alliance, to powerful Transatlantic big business lobby groups, such as the Transatlantic Business Council. Their demands include all emissions testing regimes, covering the tiniest Fiat to the largest Freightliner.
So how successful was industry at pushing this agenda with the European negotiators at the Commission? In reality, that was never an obstacle.

According to a series of documents obtained by Corporate Europe Observatory on meetings between the Commission and the car lobby, the latter has been very effective in making its case. This isn't even just due to the skills of their lobbyists, but also to the crucial fact that Commission has kept the door wide open, and has promised that for the car-sector, TTIP would be an industry driven process.  On 13 July 2012, a year before the negotiations took off, Commission representatives concluded at a meeting with car lobbyists that “any action proposed should be demand driven, based on input from industry".

Two years into the negotiations, the open door policy is clearly unchanged, as the Commission makes no effort to hide its close collaboration with the car industry at the TTIP negotiations. In its current position paper, the EU devotes itself to mutual recognition of technical requirements, where possible, and the link to the car lobby’s wish list is clear. Also, further considerations are to be based on information produced by industry itself. The paper states: “Pending  a  more  detailed  data-driven  analysis, the lists of matching regulations submitted  by the industry in their joint contributions, already provide  a  valuable  indication  of  industry’s expectations for this negotiation.  Regulators would conduct such an equivalence assessment  based  on  data  provided  by  the industry  as  well  as  other  available  data.”

It appears striking that the Commission did not raise an eyebrow at the inclusion of emissions testing even before the VW scandal broke: rules on emissions from cars have been contentious in the EU for decades. It would have been the responsible thing to do to dig deep and identify the implications of common testing methods which for the car lobby meant lower standards. The industry agenda set out to build a rulebook with “no net increase in U.S. or EU regulatory requirements, as a result of regulatory convergence of existing regulations,” as stated in the key position paper of ACEA and the AAPC, the two main car lobby groups on the two sides.

But the inclusion of testing methods in the TTIP negotiations did not ring any alarm bells in the Commission, perhaps a sign of the depth of collusion with industry. According to its position paper on “Vehicles in TTIP”, the Commission is “not currently aware of any issues which are especially sensitive or where people have raised specific concerns".
It is certainly not true that there have been no concerned voices over the testing regime, even well before the VW scandal.  The concerns over European testing procedures have been voiced by many for years now, for instance in a Dutch report from 2013. And as for the debate over fuel efficiency and emissions – that goes back decades. Perhaps the Commission has not listened carefully to other voices than industry?

TTIP: by and for corporations

Apparently the Commission is listening a bit too closely when it comes to industry lobbyists. Not least when another and parallel scandal is taken into account. Recently it was discovered that the car industry had kept results from a study on car safety hidden. The study shows EU models to be 33 percent safer than US models in front-side collisions, which is obviously bad news to the car industry, seeking to have tests on both sides recognized mutually.  Here too, the Commission is left in an embarrassing position. In the EU position paper, it is boldly stated that though technical requirements differ, EU and US vehicle regulations “provide for a high level of safety and environmental protection”, and that “there is little doubt that the levels of safety required by both sides are broadly comparable”.

Clearly, these stories are unwelcome news for the car lobby. For the public, this adds to the suspicion that corporations can easily exploit the TTIP negotiations to promote their agenda, and that all tricks in the book are being used to promote deregulation.

What about the corporate culture?!?!
Andrew

Such a deep, complicated, multi-dimensional issue, this Dieselgate/Fraudvergnügen, but let's just talk about powerful and giant VW's corporate culture.

Bob Lutz, ex of GM, Chrysler and BMW, writes, "Ferdinand Piëch more than likely the root cause of the VW diesel-emissions scandal… a reign of terror and a culture where performance was driven by fear and intimidation."

A piece by Reuters "Fear and respect: VW's culture under Winterkorn" had this to say: "a management style… fostered a climate of fear, an authoritarianism that went unchecked partly due to a company structure unique in the German motor industry… a special pressure at VW."

A DW article, "Heroes or traitors: Whistleblowers in German business", says "VW's company culture is all about hierarchy and fear"; more generally, there's a relevant DW piece on "Germany's dire record on protecting whistleblowers." Also this page describes som innner details about the culture of VW in the danish nabouring branch: http://www.xn--billig-bredbnd-wib.nu/ ...