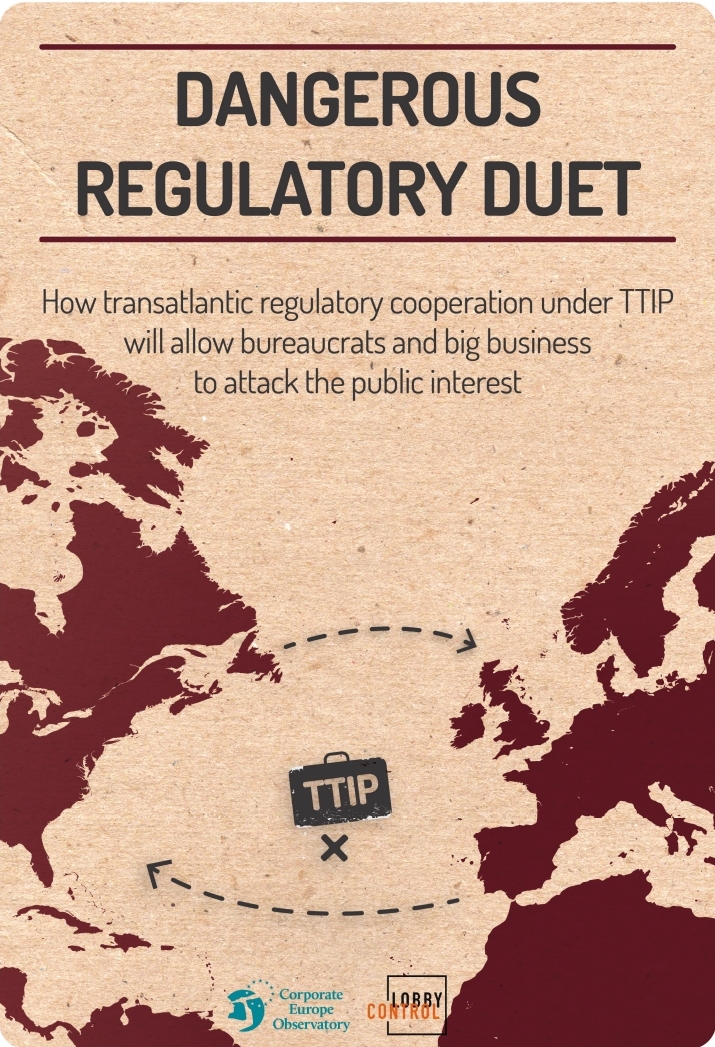 The ongoing EU-US trade negotiations, TTIP, seek to bring rules on both sides of the Atlantic together by means of so-called regulatory cooperation. This part of the talks involves dismantling existing “regulatory barriers” and preventing new ones from emerging with public interest regulations having to go through lengthy procedures, including vetting by business for possible impacts on trade. It has sparked concerns that the trade deal will lead to attacks on environmental protections, safety at work regulations, and laws to defend public health and food safety– to name but a few. Our latest report finds that regulatory cooperation procedures have already been used to delay, water down and prevent legislation in the public interest. It thus confirms this critique.

The report examines the origins and impacts of TTIP's proposals for regulatory cooperation and shows that the process has been dominated by big business right from the start. The examples highlighted in the study are the weakening of EU ambition on the management of hazardous electronic waste, the lack of supervision of the insurance giant AIG in the years leading up to the 2008 financial crash, the free pass offered to US companies on the Safe Harbour agreement that allowed them to ignore rules on the protection of personal data, and delayed or weakened proposals on animal testing, ozone-depleting substances, and aviation emissions.

The favoured approach of the EU - to ensure laws are similar on both sides of the Atlantic - is exactly the kind of “regulatory cooperation” that has already resulted in lower standards.

The TTIP talks between the two sides officially started in 2013, but preparations for the deal have been ongoing for decades, largely in secret and with privileged access granted to representatives from big business. They cover a wide range of policy areas from chemicals regulations to employment policy, data protection to agriculture and is thus the biggest focal point for lobbying efforts right now in Brussels.

TTIP and extraterritorial reach of US laws
jean-guy giraud

The extraterritorial reach of US laws is likely to have a strong impact on US/EU trade and investment relations - notably via (heavy) sanctions on EU firms (notably - but not solely - on EU financial institutions). Although not formally included in TTIP negotiations, this question should be dealt with in parallel as the present (and next ?) US administration is increasing its international reach in conjunction with its diplomacy. JGG

TTIP is not about specific rules but giving US corporations censorship rules for EU Commission legal proposals. Stakeholderism on steroids.

Plus mutual recognition which means worse of both worlds.

Democracy must be able to change, if it cant then it isnt true democracy. The idea that some company (presumably only corporations will be able to make use of this anyways) will be able to go to a Government and sue them like some low down dirty criminal all just because their parliament created more stringent health,safety,environmental,financial,worker protection laws etc. is anti democratic and therefore must be challenged and put down whenever this terroristic concept shows itself in proposals. That someone could even come up with something as disgusting as this should be a red flag as to what kind of people our politicians are getting their advice from. My words may be harsh but only to match the harshness of those who wish to attack our nations freedoms to create and change laws.