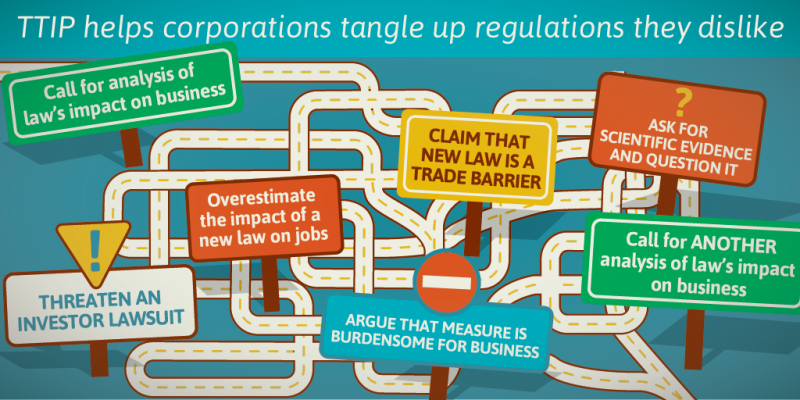 The undersigned organisations are writing to express our deep concern with
the new EU proposal on horizontal regulatory cooperation (dated 21. March
2016) in the EU-US TTIP negotiations . We consider it a threat to democratic
decision-making and regulation in the public interest.

The new EU position paper on “regulatory cooperation and good regulatory
practices" offers an insight into how negotiators hope to avoid future "nontariff"
and "technical barriers" to trade. While it is unclear precisely what form
such “cooperation” would take, we understand that the proposals would entail
several changes to EU and US law-making processes.

Here is our critical assessment of the new EU proposal:

1. The proposal makes it possible for the US to exert undue influence at a very
early stage of decision-making, before any proposal is considered by elected
bodies, namely the Council and the European Parliament. Judging from past
experience, such an approach can have a detrimental impact on regulation in
the public interest. It also undermines democracy.

2. The proposal provides big business groups with the tools to influence
legislation that they have been demanding, including a mechanism by which
transatlantic business coalitions can include their own preferences in the
regulatory cooperation working programme. The establishment of a broad
advisory group with the presence of public interest groups does not offset this
institutionalisation of lobbying.

3. The new proposal clearly identifies the European Commission and US
regulatory agencies as drivers and responsible actors for transatlantic
regulatory cooperation. The question of how it is supposed to function is
postponed until after the ratification of TTIP and thus to a moment when it gets
less public attention is on it. So we see no major improvement here. It implies
an unacceptable power grab by the Commission, strengthens the US impact on
EU regulation and weakens the role of the European Parliament. Even though
the proposal does not contain a Regulatory Cooperation Body (RCB) any
longer, its functions still remain.

4. The proposal gives immense powers to "regulatory authorities" (the
European Commission in the case of the EU) to decide on the development of
regulatory cooperation, including on the selection of areas which the two sides
are to cooperate on.

5. The new proposals imply an importation of elements of the US regulatory
system to the EU, among them an enhanced role for impact assessment by
means of cost-benefit analyses in the planning phase of legislation. The
balance between trade criteria and environmental and social issues is not met.
This could lead to the watering down and delay of important legislation in the
public interest.

Given the five points mentioned above, we ask you to end the TTIP
negotiations, as trade agreements are not the appropriate fora to decide on
our public interest laws.