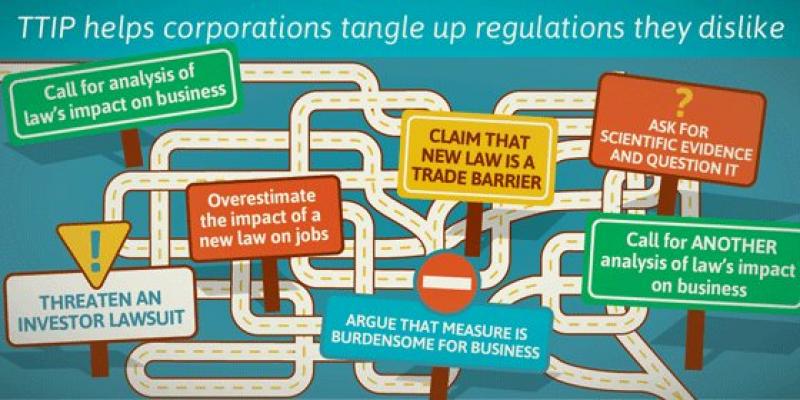 EU's TTIP position: regulations to be made for and by big business

The free trade agreement being negotiated between the EU and the US will affect how laws are made in the European Union, to the benefit of corporations and at the expense of our health, our environment, and our rights. Despite growing concerns among the European public, the new EU proposal on regulatory cooperation in TTIP does nothing, not even little, to address the upcoming democratic threats.

The EU-US Transatlantic Trade and Investment Partnership or TTIP, is highly controversial; in particular the provisions known as regulatory cooperation. That is because regulatory cooperation, on the surface a way to 'harmonise' rules across the Atlantic, could in practice weaken rules on protecting us against everything from toxic chemicals and unhealthy food, to wild speculation by banks. The European Commission recently published its new positions on this cooperation. The two chapters they released reveal the Commission is willing to change how it makes laws to favour trade and multinationals over all public interest considerations.

Under regulatory cooperation trade officials will continue to negotiate our future and existing laws. This pushes contentious issues farther away from public scrutiny to be brokered over the coming years after TTIP is passed, giving big business lobby groups ample opportunities to influence the result of the decision-making.

Through TTIP the European Commission gives stakeholders the right to initiate regulatory cooperation. In other words, big business will be able to submit proposals (Article x5 2 – regulatory cooperation) for new regulations applicable on both sides of the Atlantic. This fuels fears for a 'race to the bottom' on standards and practically gives big business the right to initiate legislation, something even the European Parliament cannot do.

In addition, TTIP will set in stone a particular type of impact assessment. Future and existing EU laws will have to go through these evaluations. Whilst they may sound merely procedural, in the past impact assessments have been used in highly political ways, for example to water down, delay or abandon any laws which might run counter to business interests. TTIP means existing and future laws will be weighted for their costs and benefits from an extremely narrow perspective. In fact, cost-benefit analysis (Article 8 2 a - good regulatory practices) only looks at costs of laws for business whilst paying little attention to the benefits for society as a whole.

Finally, it should be a matter of great concern to public interest groups that regulatory cooperation will be managed almost entirely by trade bureaucrats. According to the newly released chapters the Commission, for instance, will offer cooperation with the US and big business on new laws, well before any elected assembly is involved. Such an approach under a trade deal is a terrible idea for democracy – and it will present a serious obstacle to regulation in the public interest.

TTIP tilts the balance towards benefits for big business and costs for society as a whole. And giving more power to big business risks undermining the rights we have today and the protections we need for tomorrow such as laws to reduce our exposure to toxic chemicals, standards to protect our data online, or regulations to improve the quality of the air we breathe, to mention just a few.

Regulatory cooperation is clearly an attempt by trade officials to put their interests first, along with those of their allies in the big business community. As these new chapter releases only confirm, the Commission's objectives with TTIP are crystal clear: bypassing democracy in favour of the few and at the expense of the many.

I totally agree on harmonising the rules across the atlantic to favor trade between countries. However maybe make some strict regulations in certain areas, such as "chemicals", so that we avoid toxic waste hurting our environment.

Need to think of consequences
Vera

While free trade is important the concerns of the general public needs to be taken into consideration. Without public approval it is doomed to fail. Just look at how these trade agreements are talked about in the USA currently.

Jonas - what planet are you from?
John

You said: "... make some strict regulations in certain areas..." - assuming that the other "regulations" aren't 'strict' and can therefore be ignored? I see where you're coming from - are you an investment arbitrator/regulator/academic, by any chance?

You also said: "... harmonising the rules across the atlantic ..." - Ahh, so Europe can benefit from GMO's nutrition, the FDA's protection, the coming Internet balkanisation, Monsanto's safety practices, unions' triviality / workers' compliance, Trump's immigration policies, neolibralism's profits and other such charming US modus operandi?