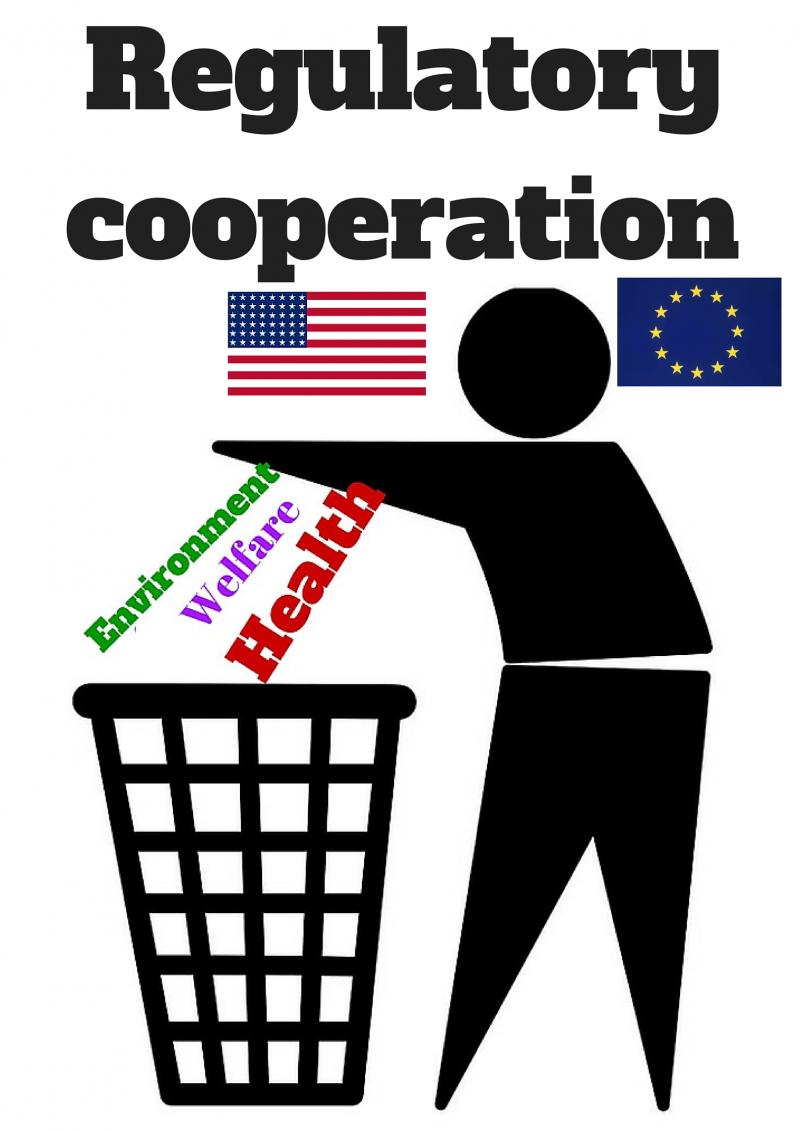 TTIP (Transatlantic Trade and Investment Partnership) has sparked a public outcry in Europe. The recent leak of many parts of TTIP by Greenpeace, allowing us for the first time to read the negotiating position of the US, confirms the most serious concerns.

PDF version of this article

On top of private parallel courts which would create an avenue for multinationals to receive vast amount of taxpayers’ money in 'compensation' for democratic decisions, TTIP poses another threat to public interest legislation: regulatory cooperation (or convergence, as often referred to in the USA). Regulatory cooperation aims to align standards across the Atlantic by changing law-making in the European Union and the United States of America.

Both EU and US positions on regulatory cooperation show there is reason for concerni. Corporate Europe Observatory's analysis has led us to two worrisome conclusions: First, transatlantic standards will to a large extent be set behind closed doors by a limited group of actors: big business, the US regulatory authorities, and the European Commission. And second, unelected officials are ready to further sacrifice our democratic rules and reduce our social and environmental protections, such as healthy working conditions and product safety, on the altar of trade.

Regulatory cooperation opens the corridors of power to big business to alter current, future, and even previous legislations.

The proposals of the European Union for instance give powerful rights to stakeholders.ii Due to the power imbalances in Brussels and based upon past examples of transatlantic dialogues,iii it will be big business which will occupy most of the political space for stakeholders in regulatory cooperation.

The European Commission, for instance, is ready to give big business the right to initiate a cooperation process, ie to suggest a new law which the US and the EU authorities should work on.iv This effectively gives lobbies the right to define the political agenda in the hugely broad area of regulation of goods and services. The Greenpeace leak reveals that both governments are also willing to go even further by providing lobbies with the right to ask the EU or US authorities to issue, amend, or repeal a regulation.v This is an open invitation for industry to attack laws it dislikes.

Take the example of the European chemicals lobby CEFIC (European Chemical Industry Council). This group could suggest simplification and burden reduction for parts of the European chemicals legislation known as REACH (Registration, Evaluation, Authorisation and Restriction of Chemicals). Indeed CEFIC and the European Commission are keen to reduce the 'burden'vi of complying with REACH. And the EU has included in its proposals the possibility for big business to submit suggestions to 'simplify' and reduce so called 'burdensome' regulations.vii

The fact that REACH falls under the scope of regulatory cooperation is contrary to the July 2015 resolution of the European parliament on TTIP which demanded for REACH and its implementation to be excluded from TTIP as the rules across the Atlantic are very differentviii. This reveals how little consideration trade officials, who will be in charge of the regulatory cooperation process, have for parliamentary demands.

If a regulation is controversial, big business could wait for the public controversy to wind down before reopening the debate between trade officials behind closed doors. Big business is thus given a powerful tool to dislodge regulatory achievements in public health, environmental protection, climate justice, etc if they deem these 'too costly' for them.

Interference of US government

In addition to big business, the US governmentix will also gain major rights to participate in EU rule-making, including the opportunity to comment on laws at a very early stage.

We have already seen the dire consequences of the US government's regulatory interference. One dialogue between the EU and US authorities led to a long delay in the adoption of a ban on cosmetics tested on animals. Originally, the ban should have been fully adopted by 1998. But the regulatory dialogue between the EU and US governments led to a 15-year delay. The full ban only became effective in 2013.x

The world of law-making in Brussels is opaque. Rather than rendering it more transparent, the European Commission is opening yet another dark corridor of power for a business-driven agenda, with little consideration for citizens.

Benefits for trade weigh more than costs for society

Regulatory cooperation will take the form of regular dialogues between regulators on existing and future legislations, with a focus on trade, and in close partnership with big business.

Transatlantic regulatory dialogues would happen at a very early stage of law-making, even before the European Parliament or the member state governments address the issue,xi according to the EU proposals. This demand actually stems from a proposal at a lunch between the US Chamber of Commerce and the European Commission in Washington in November 2013.xii

If early on in the legislative process the people driving it see the world as a market place, and if they are constantly reminded of the need to take the message of big business and the US government into account, laws are unlikely to take into account environmental or social concerns. And if big business has an early warning on new laws, it can elaborate a strong lobbying strategy, for or against them, depending on their interests.

Furthermore, in its proposals the European Commission is shifting its impact assessments towards a narrow cost-benefit analysis.xiii Before now, impact assessments have led to higher levels of protection in the EU than in the US in terms of exposure to dangerous chemicals, working conditions, consumer information, data privacy, etc. However, these new EU impact assessments will look more closely at costs for businesses than at the benefits of a law for society as a whole. These new assessments will also happen retrospectively,xiv meaning that periodically, existing laws will be reassessed according to newer, corporate-biased criteria.

To make sure those assessments are favourable to big business and US interests, the US government is also ready to grant big business yet another right: the possibility to comment on impact assessments.xv

Lastly, impact assessments will have to consider the “need” for a law to exist at all.xvi This is a powerful political decision taken by unelected trade officials, and constitutes a powerful new weapon for big business to argue a law is trade restrictive and thus unnecessary.

A close look at how regulatory cooperation will be undertaken reveals risks for public interest legislation; an examination of the outcomes of this cooperation is even more worrisome.

This is because one of the objectives of regulatory cooperation is mutual recognition,xvii meaning laws in the EU and the USA will be recognised as equivalent. Following EU laws will be sufficient for big business to export its services and products to the US, and vice versa.

This mutual recognition example shows how the EU is ready to abandon its core principles, elaborated to protect people from health and environmental risks, to create a transatlantic market. Following public pressure, the Commission had to withdraw mutual recognition in its position paper on cosmeticsxix in TTIP in March 2015. Whilst it has now been removed from the cosmetics chapter of TTIP, it is still in the regulatory cooperation chapter of TTIP.

Harmonisation was a demand of the US and EU pesticides lobby which found its way in the European proposals. The pesticides lobby would like to harmonise the maximum levels of pesticides which can be found in food sold in the EU and the US,xxi thereby increasing the exposure of consumers, the environment, and farmers to toxic chemicals.xxii

The powerful take it all

The proposals of the European Union and the United States are complementary. They clearly demonstrate who the losers and winners of TTIP are. On the one hand, the trade deal will change how we make laws, giving more power to unelected trade officials: the Secretary General of the European Commission, and DG Trade, on the European side. The latter tend to have little consideration for issues such as public health, consumer protection, or environmental protection, let alone climate justice.

This is the major threat of regulatory cooperation: it represents a direct attack on democracy and the triumph of the ideology that what is good for big business is good for society. The results are that the winner (big business) takes it all, at the expense of our health, welfare, and environment.

As our US friends tell us time and time again: “Europe, beware. The leaked TTIP text confirms that the United States is trying to export its failed regulatory model.”xxiii And the EU is ready to import it, thereby offering a “gift that keeps on giving”xxiv to big business lobbies.

xii Summary of a lunch between the US Chmaber of Commerce and the European Commission in Washington in November 2013. Available upon request to CEO.

xxiv European Union (2013) Report of the visit of Director DG Trade to Washington Available at: