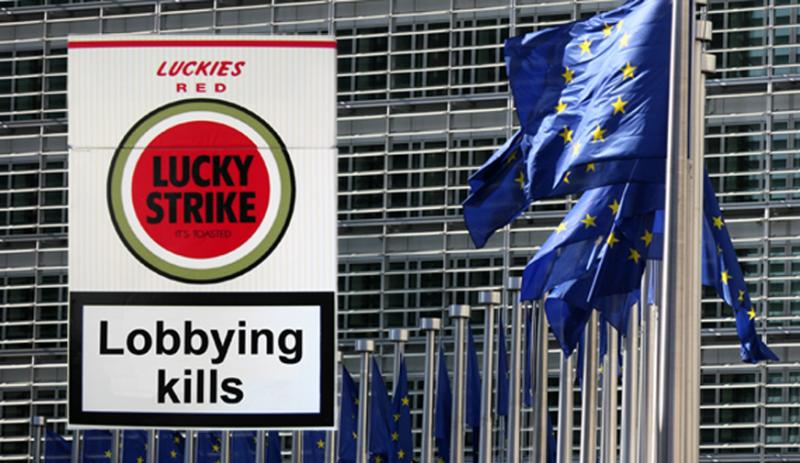 Mapping the tobacco lobby in Brussels: a smoky business

Around 97 full-time lobbyists defend the interests of the tobacco industry in Brussels, and the industry’s total annual lobbying budget in the EU capital exceeds €5.3 million, according to entries in the EU's voluntary Transparency Register and conservative estimates. But these figures are only the tip of the iceberg. And a key Dalligate-related question remains: is the mystery “company with expertise in EU affairs” allegedly working with Silvio Zammit, the political associate of former Health Commissioner John Dalli, in the register?

Searches in the register and public records show that 9 tobacco companies and 22 tobacco industry lobby groups are active in Brussels to “influenc[e] the policy formulation and decision-making processes of the European institutions” – as the European Commission defines EU lobbying [1]. To help them in their job, these 31 players are paying some additional 12 ‘for-hire’ PR and lobbying firms (see table below).

In the lobby groups category, the European Association of Tobacco Growers (UNITAB) ranks first with a lobbying budget of €875,000, more than 90% of which was paid to Communication & Institutions (C&I), a French PR and lobbying firm, and member of the Omnicom network, to lobby on behalf of UNITAB.

From tobacco growers to retailers, passing through manufacturers and distributors, the whole tobacco supply chain is represented in Brussels. But the number of tobacco industry lobbyists, and the size of the lobbying budgets declared by the 31 players identified, are, for several reasons, clearly underestimates.

1. The Register is not mandatory

First, the Transparency Register is not mandatory and several tobacco industry companies, lobby groups, PR firms or law firms which are known to be lobbying the EU institutions on tobacco, have simply not registered.

Germany-based company Reemtsma, a subsidiary of Imperial Tobacco and one of the biggest tobacco and cigarette producers in Europe, has not registered, despite hiring a Brussels-based lobbyist in 2011 to follow the revision of the TPD [3]. Reemtsma deliberately chose not to register, as is the case with many other tobacco industry players, such as Oliver Twist and Assens Tobaksfabrik, both of which are represented on the board or in the committees of the European Smokeless Tobacco Council (ESTOC).

The Electronic Cigarette Industry Trade Association (ECITA), which has said with regards to EU lobbying that “the only way forward is true transparency” [4], has not  registered. Yet, there is documented evidence that it was lobbying the European Commission on the ongoing revision of the Tobacco Products Directive (TPD) last June [5].

Besides tobacco companies and their lobby associations, several prominent PR firms active on the EU lobbying front have also chosen not to register. One of the most striking examples is Bell Pottinger, which has been hired by Imperial Tobacco to lobby the European Commission on its behalf, according to an access-to-documents request filed by researchers at the University of Bath [7].

In October 2011, Tobias Ghersetti, a public affairs consultant from the PR firm, wrote to DG Trade about the TPD consultation process, arguing against the introduction of plain packaging. More recently, on 24 October 2012, the Director of European Affairs at Bell Pottinger, Daniel Hamilton, was providing live Twitter updates on John Dalli’s press conference in Brussels [8]. As Bell Pottinger is unregistered, it is impossible to know how much Imperial Tobacco has paid the firm to lobby the Commission, or to monitor so-called Dalligate on its behalf.

Tobacco companies and their lobby associations – registered or not – may have hired law firms to lobby on their behalf. Law firms generally boycott the Transparency Register (or register but do not disclose their clients [9]), so it is impossible to know who their clients are or their lobbying budgets.

A clear example concerns the European Smokeless Tobacco Council (ESTOC), a lobby group involved in the case leading to Commissioner Dalli’s resignation, which has hired Pappas & Associates, an unregistered Brussels-based law firm [10]. In June 2010, Spyros Pappas made a presentation at ESTOC’s 5th Parliamentary Evening in Strasbourg, a meeting co-hosted by two MEPs and clearly aimed at influencing the policy formulation and decision-making processes of the European institutions.

The registrants do not always disclose all their clients. Corporate Europe Observatory (CEO) has gathered clear evidence that Luther Pendragon, a British PR and lobbying firm with a Brussels office, is working for the European Retailers and Tobacconists Association (CEDT). In an e-mail sent to dozens of Brussels-based EU affairs journalists, Luther Pendragon promoted a protest action of tobacco retailers in several EU countries, offering to arrange interviews and providing pictures to illustrate press articles [11]. CEDT’s Italian member Federazione Italiana Tabaccai (FIT) later boasted that the demonstration was “un grande successo” (a big success) [12].

Recent research by the Alliance for Lobbying Transparency and Ethics Regulation (ALTER-EU) has shown that many of the reported lobbying expenditures in the EU Transparency Register are unrealistically low [13]. In some instances, the real lobbying expenditure “could easily be 10 times higher than the amount declared in the register”, the ALTER-EU report concludes.

This widespread under-reporting trend also applies to the number of lobbyists declared. ESTOC, for instance, declared only two lobbyists on the register while its own website shows that 27 different people are active either on its board or in its committees. Perhaps some of these individuals, who come from ESTOC member companies, are not working full-time for ESTOC, but it seems very unlikely that altogether they represent only two full-time equivalents.

[3] Self-employed consultant Carsten Klenke used to be the director of the Saxony office in Brussels. http://ec.europa.eu/transparencyregister/public/consultation/displaylobbyist.do?id=98413578670-86 ; http://www.european-agenda.com/events/25385.php

[9] Recently, two law firms, White & Case and Reed Smith LLP, were suspended from the Register for breaching this guideline. http://www.publicserviceeurope.com/article/2508/eu-transparency-register-incomplete-and-inconsistent

[11] The email dated 7 September starts with: “On behalf the CEDT – the European retailers and tobacconist association I am writing to let you know about protests involving 1000s of retailers that have been taking place in several European countries.”