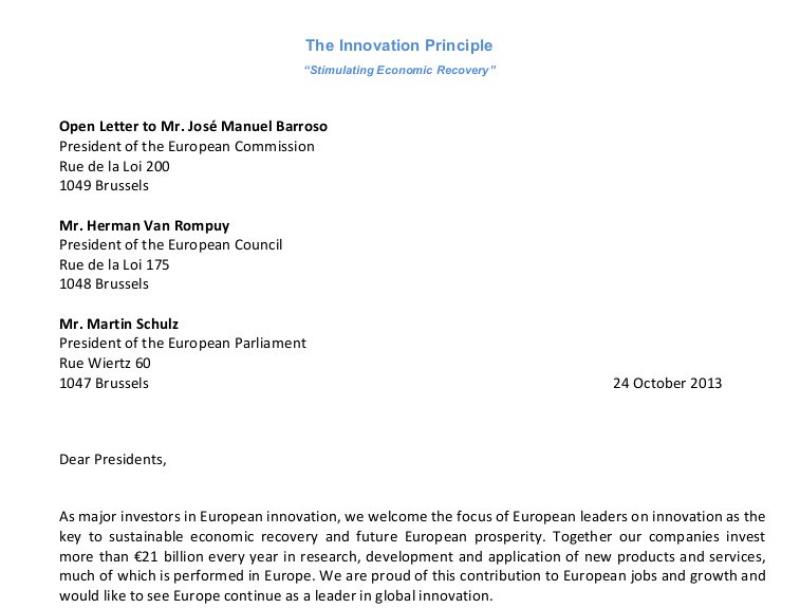 A corporate attack on the precautionary principle, and an appeal to Mrs Anne Glover’s transparency commitments.

The first one, entitled Government in danger of stifling bright ideas, is written by an FT journalist and quotes extensively from an open letter that the chief executives of twelve multinational corporations1 sent today to the presidents of the European Commission, the European Council and the European Parliament. With this letter they want to lobby the EU ahead of next week’s European Council, where innovation will be a priority theme.

In their letter, the twelve CEOs ask for the adoption of an "innovation principle" to restrict the "precautionary principle", which in their view has gone too far : "our concern is that the necessary balance of precaution and proportion is increasingly being replaced by a simple reliance on the precautionary principle and the avoidance of technological risk". What they ask for is simple : "whenever precautionary legislation is under consideration, the impact on innovation should also be taken into full account in the policy and legislative process". In other words : whenever an EU legislative initiative is to be launched to protect citizens from potential hazards posed by this or that technology, the European Commission should make sure this does not prevent big business from putting new products on the market. This would extend the opportunities within the already well-developed impact assessment framework that can help business kill unwanted legislative developments before they even reach the European Parliament. And indeed the list of recommendations accompanying the letter mentions an upgrade of the Impact Assessment procedures2. It is remarkable that these vocal opponents of « red tape » enthusiastically advocate adding extra layers of bureaucracy when they see a chance to paralyse legislation that could harm corporate interests.

One of their recommendations is to « provide a formal power to the Chief Scientist of the European Commission to review the use of scientific evidence in risk management legislation, regulation or administrative decision and to require further scientific assessment where appropriate ». That provides an interesting context to a second piece in today’s FT: an op-ed by... you, Mrs Glover, the aforementioned Chief Scientific Adviser of the European Commission. In this op-ed, co-written with your assistant Jan Marco Müller, you say that there is a « fundamental mistrust of industry and industrial R&D by society » and that « this mistrust is increasingly hampering our ability to innovate ». You argue that industry scientists should be involved in regulating industry products, apparently ignoring the concerns raised by NGOs about conflicts of interests at EFSA or EMA for instance. « We trust industry where it suits us: in the toothpaste we use, the pizza we buy or the car we drive. But people seem to have a problem in trusting industry when it comes to influencing policy making. Why is this so? » Because of past bad behaviour by industry, you say. So, if industry changes, everything will be fine. Why not ? You write : « We need transparency on all sides […] why not apply this principle to policy making without any taboos as to who contributes? That is what we would call “open policy making” ».

The problem is that industry has no intention to change its secretive practices. Not less than two weeks ago, a coalition made of FoodDrinkEurope (the food industry lobby), ELC (speciality foods), CEFIC (chemical industry), NATCOL (natural colours) and Europabio (the biotech industry) told the European Food Safety Authority (EFSA) that they didn’t want the agency to publish on its website the toxicology studies that industry had sent to EFSA for market authorisations. Yes, in the EU, industry is in charge of doing the toxicology studies on its own products but doesn’t want the public to see them. This position is actually repeated in the recommendations attached to the aforementioned open letter of the twelve CEOs : « protection of commercially sensitive information ».

So, Mrs Glover, for the sake of open debate and truly « open policy-making » could you please publicly request these companies to publish in full these toxicologic studies which are of such crucial importance for public health ? We asked EFSA to pro-actively disclose them, but the result was negative because industry opposed it, even though, as you eloquently say, « publishing based on peer review is a fundamental principle » in science. Since industry seems to like you more than NGOs maybe they would be more forthcoming if you ask them ?