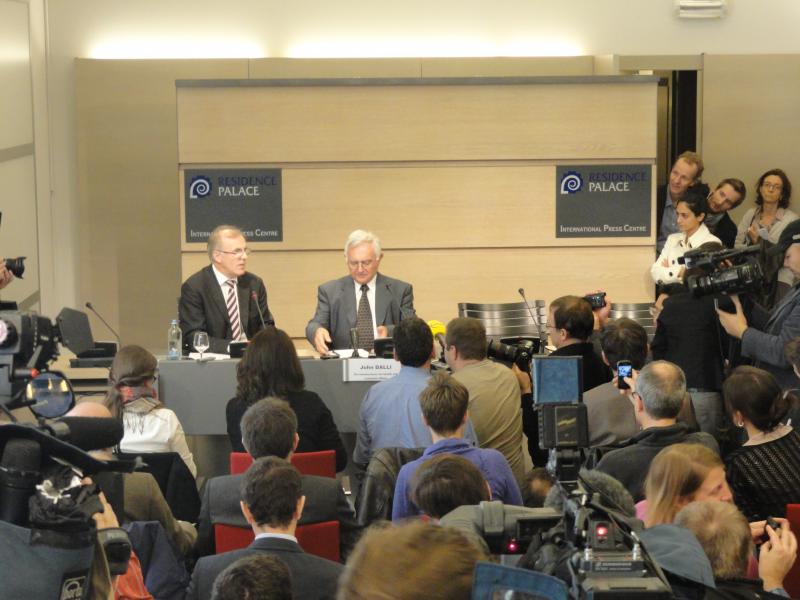 See no evil, hear no evil, speak no evil. The Commission's (non-)response to Dalligate

The best fiction writers in the world would struggle to come up with a tale as complex and as conspiracy-laden as Dalligate. A commissioner forced to resign; allegations of demands for €60 million bribes; leaked secret reports; dodgy middle-men; revolving door lobbyists; allegations of institutional cover-ups; vital public health legislation disrupted... and how does the Commission respond? Business as usual. At the time (16 October 2012), the Dalligate scandal rocked the Commission but one year on, Barroso has done his best to brush it under the carpet, ignoring the huge loopholes in the lobbying transparency rules and the Code of Conduct for Commissioners which enabled the scandal to take hold in the first place.

One year on and no efforts have apparently been made to learn the lessons and try to prevent something similar from happening again.

The acrimonious departure of the European Health Commissioner John Dalli in October 2012 followed an investigation by the European Anti-Fraud Office (OLAF) which had been prompted by a complaint from tobacco company Swedish Match. The firm alleged that an associate of Mr Dalli (Silvio Zammit) had offered to set up meetings with the Commissioner, with a view to changing the Tobacco Products Directive in the company’s favour, in return for €60 million.

Dalli has consistently denied these allegations and has taken both the European Commission and Swedish Match to court. The OLAF investigation, despite the claims of its director, Giovanni Kessler, that there was “unambiguous circumstantial evidence” that Dalli knew of these dealings, has been shown, following a leak of the investigation report, to contain no conclusive evidence of Mr Dalli’s involvement. Indeed, MEPs have demanded the resignation of OLAF's director following its handling of the investigation. Meanwhile, the responsible authorities, the Maltese judiciary, confirmed in June 2013 that there were no grounds to begin legal proceedings against Dalli.

One thing is clear: one year on, the truth of the Dalligate scandal remains known only to those intimately involved. And lessons have apparently not been learned by those with the power – and responsibility – to prevent such a scandal from happening again. As the European Voice newspaper wrote earlier this year, the “fall-out from the John Dalli case shows how the EU institutions keep getting it wrong when it comes to lobbying”.

Dalligate – what should the Commission have already done?

1. Remove the lobbyist in the ethical committee

Michel Petite played a significant role in the Dalligate scandal when, as a lawyer working for Clifford Chance, he advised the tobacco firm Swedish Match on how to make its complaint to the Commission. Petite, the former Head of the Commission's Legal Service, went through the revolving door in 2008 to join Clifford Chance. Since then, Petite has been involved in legal and interest representation of corporate clients, including the tobacco industry, to the Commission and Parliament. With this background it was particularly surprising that, in December 2012, he was re-appointed to sit on the Commission's ad hoc ethical committee, which advises the Commission on the propriety of proposed revolving door moves by departing commissioners. We consider that it is not appropriate for Petite to remain in a role where he must advise on the ethical implications of the post-office activities of Commissioners. NGOs LobbyControl, Corporate Accountability International and CEO have submitted a complaint to the EU Ombudsman to try to overturn the reappointment of Michel Petite. In fact, the Commission's committee should be entirely revamped to become a fully independent committee with a broader ethics remit.

2. Not treat transparency as optional and introduce a mandatory lobby register Front cover for ALTER-EU's report on the Transparency Register

Too many EU lobbyists continue to refuse to sign up to the EU's voluntary lobby register. The tobacco firm at the heart of the Dalligate scandal Swedish Match (which is registered), employed Gayle Kimberley (a Maltese lawyer, on sabbatical from the European Council) to engage in interest representation work on their behalf, including to meet Commissioner Dalli. Kimberley is not in the Transparency Register, thus enabling Swedish Match to circumvent the requirements for transparency. Neither is Silvio Zammit (the Maltese businessman and associate of Dalli) in the register; he is the political 'fixer' who allegedly demanded the €60 million in return for changes to EU tobacco legislation. Furthermore, Clifford Chance, the law firm which employs Michel Petite (see above) is also not registered. Meanwhile Commissioners seem only too happy to provide access to non-registered lobbyists. John Dalli knowingly met with lobbyists who were not registered and he has since defended the role of Maltese 'fixers' liaising between himself and international organisations, admitting that they are not usually registered. The only way to avoid these situations is for the lobby register to become mandatory. However, for the time being, the Commission shows little interest in taking such a step. Until the register does become mandatory, Commissioners and Commission staff should not meet with unregistered lobbyists and / or agents acting on their behalf. They should report all such approaches, recognising that it is not appropriate for lobbyists to use these tactics to try to evade transparency rules.

In CEO's view, Swedish Match violated the EU's Code of Conduct for lobbyists which says that registrants shall “not obtain or try to obtain information, or any decision, dishonestly, or by use of undue pressure or inappropriate behaviour”. Swedish Match sought out people with private access to John Dalli, to exert influence over his decisions, especially regarding the tougher control of tobacco products in the forthcoming Tobacco Products Directive. Swedish Match sent its public affairs director Johan Gabrielsson to Malta to facilitate contacts with friends and acquaintances of the Commissioner, including Silvio Zammit, and ultimately with Dalli himself. Infringing on the personal sphere of a Commissioner in this way, in pursuit of lobbying goals, is inappropriate behaviour. In addition, it has become clear that Johan Gabrielsson lied to the European Parliament about meetings held with John Dalli during a hearing of the Budget Control Committee. Again, this is appalling behaviour for a company which has agreed to abide by the lobbyists' code of conduct. Swedish Match has clearly benefitted from the recent vote on the Tobacco Products Directive which saw the European Parliament backing down from a proposal to ban flavoured snus: its share price rose by four per cent that day. CEO has submitted a complaint to the EU's lobby register about Swedish Match's lobbying activities. But so far, there has been no response (they are apparently waiting for the conclusion of legal proceedings), and anyway, the toughest measure they would face is expulsion from the (voluntary) register! The rules of the EU lobby register need better enforcing and there need to be real penalties for violations.

4. Put on-line who you meet, why and when

Campaigners wishing to get to the truth behind Dalligate have struggled to access official documents which would help reveal the real story. In particular, the Commission has refused to disclose the most important documents relating to Dalli's resignation including notes of meetings, emails and correspondence between the Commission, Dalli and / or the tobacco industry. Instead of relying upon imperfect 'access to documents' procedures, it would be far more transparent if the Commission were to pro-actively provide comprehensive information online about all meetings by Commissioners and / or Commission officials with lobbyists. In the UK, government departments already publish lists of meetings with lobbyists. Meanwhile, the precise role played by Commission Secretary General Catherine Day in Dalligate remains shrouded in mystery and a parliamentary question on the matter tabled in July 2013 has gone unanswered (as of 10 October). CEO has submitted a complaint to the EU Ombudsman about the Commission's secrecy in Dalligate.

5. Revamp the Code of Conduct for Commissioners The current Code of Conduct for Commissioners is far too abstract and full of loopholes to be effective and it should be strengthened, with precise ethics rules to prevent Commissioners from finding themselves in situations that might result in undue influence or the appearance of such. However, since Dalligate, the Commission has made no move in this direction, even when another twist in the saga showed the weaknesses in the implementation of the current code. In July 2013, the International Herald Tribune reported that Commissioner Dalli made undeclared trips to the Bahamas in July 2012 to allegedly facilitate the transfer of US$100 million on behalf of an unnamed ‘African charity’ that he was helping to set up. None of this was declared on Dalli's declaration of interests before he left the Commission. Yet the Commission continues to act as if everything is working well. OLAF is now investigating these trips.

As the World Health Organisation (WHO) states, there is a fundamental and irreconcilable conflict between the tobacco industry’s interests and public health policy interests. Its Framework Convention on Tobacco Control and the associated guidelines state that decision-makers “should interact with the tobacco industry only when and to the extent strictly necessary to enable them to effectively regulate the tobacco industry and tobacco products … where interactions with the tobacco industry are necessary, Parties should ensure that such interactions are conducted transparently”. Dalligate illustrated that this is not being properly implemented at the EU Commission. Following the scandal, CEO revealed high-level Commission officials in Barroso’s cabinet and other departments had had undisclosed meetings with tobacco lobbyists. The EU’s existing ethical guidelines and rules embodied in the Staff Regulations and the Codes of Conduct for Commissioners and for MEPs do not sufficiently protect against these real, potential, or perceived conflicts of interest, and need to be updated to be in line with the WHO guidelines. NGOs have written to Commission President Barroso to demand the implementation of the WHO rules. But Barroso's office claim that their approach is already “compatible” with the WHO rules, appearing to simply ignore the transparency requirements. The European Parliament seems similarly unwilling to implement the UN rules and guidelines. Earlier in 2013, the Green group had asked for a special European parliament committee on tobacco lobbying to be set up; this proposal was rejected by a parliamentary majority. The recent European parliamentary vote on the Tobacco Products Directive demonstrates just how successful the tobacco industry has been. It is vital that the President of the European Parliament Martin Schulz, together with the members of the group reviewing the lobby register, put forward strong proposals to control excessive corporate lobbying, including from the tobacco industry; however, the signals from both the president and the review group are not looking positive.

The loopholes and weaknesses that Dalligate exposed in the Commission's ethical and transparency rules need urgent fixing. It is essential that the Commission puts in place new policies and procedures to ensure that a scandal like Dalligate cannot happen again. With only seven months before the European Parliamentary elections and less than 18 months before the College of Commission will be renewed, action is needed by Barroso – otherwise it seems clear that cynicism about EU politics amongst those outside the Brussels bubble will only grow...