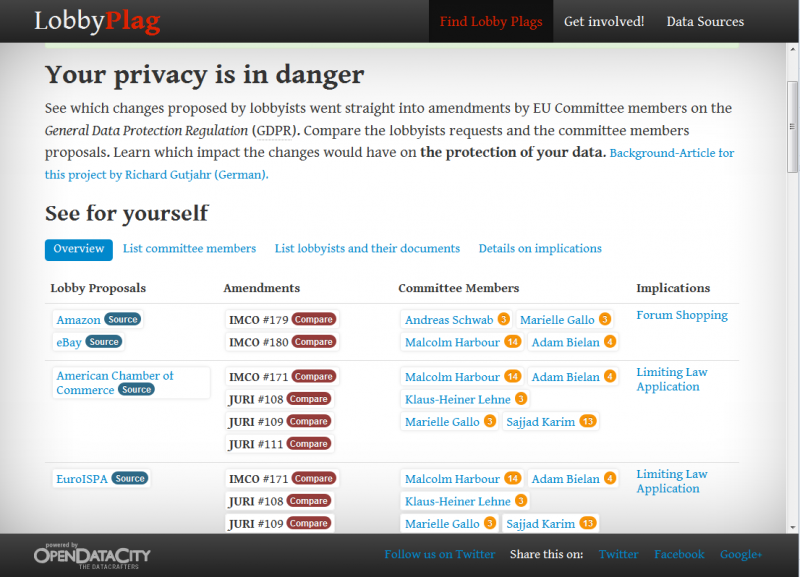 Amazon, also known for tax evasion and abominable working conditions, is one of a large number of companies that exploit the EU’s weak lobby transparency rules. The company is lobbying heavily to influence decision-making in Brussels but refuses to sign up to the Transparency Register for lobbyists, which is voluntary rather than mandatory. The company therefore manages to stay out of the spotlight, not disclosing who its lobbyists are and how much it spends on lobbying. In the coming weeks a Parliament-Commission working group will  make final decisions about the future of the EU’s lobby transparency register. The Amazon case shows the need to finally drop the failing voluntary model and move to a mandatory register with comprehensive information about lobbying.

Earlier this year the lobbyplag.eu initiative showed that Amazon – as one of many digital economy giants – had written a large number of amendments to the EU’s new data protection law, and convinced a number of MEPs to submit these amendments , hoping that they would be adopted by the European Parliament. This massive copy-pasting of industry-drafted amendments caused major controversy, because it essentially means large corporations are co-writing EU laws. One of the Amazon documents exposed by lobbyplag includes 41 pages of amendments to the proposed law!

As the company has not registered, there is no entry for Amazon on the EU’s Transparency Register website, but with some perseverance one can find out that Amazon has hired lobby consultancy Brunswick Group  and that in 2013 it paid Brunswick €100,000 - €150,000 for lobbying services. Because Amazon refuses to sign up to the register, the company’s own lobbying is invisible in the register that is supposed to provide clarity over the role of lobbying in EU decision-making. Lists of meetings disclosed by Green and Conservative MEPs show that Amazon employs lobbyists that regularly have face to face meetings with MEPs (and presumably with Commission officials). As long as the EU’s lobby transparency register is voluntary, one can only guess how many lobbyists the company employs and how much it spends on weakening EU data privacy law.

In the US, lobby transparency was voluntary until the 1990’s when a mandatory register was introduced that made registrations increase by 300% within a few years time. This means virtually every company that lobbies in the US is providing transparency, to avoid fines or other sanctions. In the US register, Amazon reported spending $2,496,831 on lobbying in 2013.

The US register also provides far more comprehensive information than the EU’s Transparency Register. The Opensecrets website, which aggregates lobby disclosure data, shows the names of all 27 lobbyists that worked for Amazon in the US in the year 2013. The EU register only lists names of those lobbyists that hold European Parliament access passes, a fraction of the total number. The US register, contrary to the EU register, also provides you with a precise overview of the issues and laws that the company lobbied on. All such information is currently not available in the EU register, even for companies that are registered, because disclosure requirements are very limited.

Amazon is certainly not the only company that exploits the voluntary nature of the EU’s lobby transparency register (see the ALTER-EU report “Rescue the Register”), but the company’s intense lobbying to weaken data privacy rights is a pressing reason for the EU to change course, drop the voluntary approach and get serious about regulating lobbying.