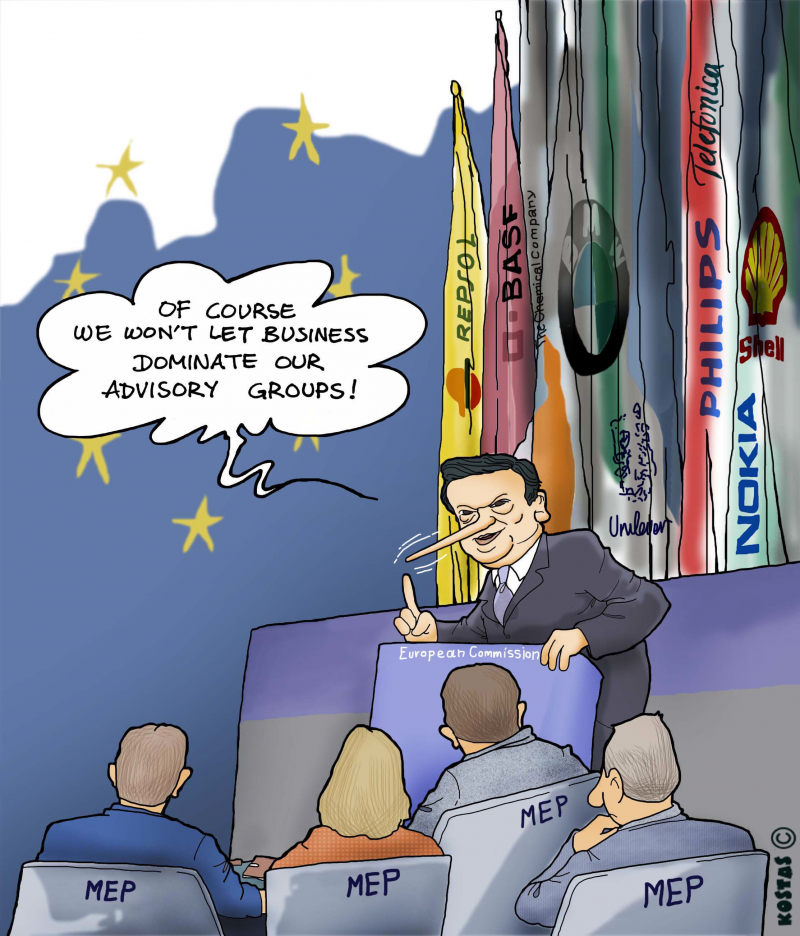 A Year of Broken Promises

Should speculators be given privileged access to dominate advice on financial regulation, beverage companies on alcohol policy, or fossil fuel companies on climate change?

A new report released today by ALTER-EU, AK EUROPA and ÖGB Europabüro1 shows the Commission is doing just that, putting big business in charge of its advisory groups despite promising MEPs reform over a year ago after they froze groups' budgets.

Assessing all 'Expert Groups' created in the year since the freeze was lifted,2 the research shows that in the department responsible for tax (DG Taxation and Customs Union, TAXUD), almost 80% of stakeholders represent corporate interests, with only 3% representing small- and medium-sized enterprises (SMEs) and 1% representing trade unions;3 in the Secretariat-General (SG), the figure for corporate interests is 64% and in DG Enterprise and Industry (ENTR) it is 62%. Across all groups recently created by the Commission there are more representatives of big business than all other stakeholders combined.4

The Secretariat-General, responsible for overseeing the Commission-wide reforms of Expert Groups, is not only continuing to create corporate-dominated Expert Groups, but 73% of its members who are supposed to be there in an 'independent' capacity are actually directly linked to big business interests. Among the 'independent' experts across the Commission's new groups, there are more corporate interests than academics.5

Pascoe Sabido representing ALTER-EU steering committee member Corporate Europe Observatory says:  “The corporate capture of many of these new groups, particularly astounding in DG Taxation, shows the Commission has clearly broken its promise to the Parliament to tackle this problem. At a time when trust in political institutions – national and European – is at an all-time low, the Commission must ensure Expert Groups are as democratic, transparent and accountable as possible, and not merely seen as doing corporations' bidding.”

Nadja Salson, tax justice campaigner with the European Public Services Union and a member of the Commission's Platform for Tax Good Governance says: “By inviting notorious advocates of tax avoidance to an Expert Group on the very problem of hidden wealth in tax havens and corporate tax avoidance, the Commission is making a mockery of its intentions to recoup the €1 trillion lost by EU members states every year. It needs to stop listening to corporations and their damaging deregulatory agendas and start prioritising the interests of its citizens and workers, not just in its tax Expert Groups but across all of them.”

Campaigners are calling on the Commission to show it is serious about its commitment to reform Expert Groups by imposing a moratorium on the creation of any new groups in the worst-performing DGs until existing ones improve.7 Campaigners are also calling on MEPs to fulfil their warning made last year that they would refreeze all Commission Expert Group budgets if there is no improvement, and urge them to view the start of the next Parliamentary term as the deadline.

In September 2012 the Parliament unfroze the Commission's Expert Groups budget following promises of reform, yet one year on it is clear that the promises made to MEPs by the Commission have been broken.

The report can be found at: http://www.alter-eu.org/documents/2013/11/a-year-of-broken-promises