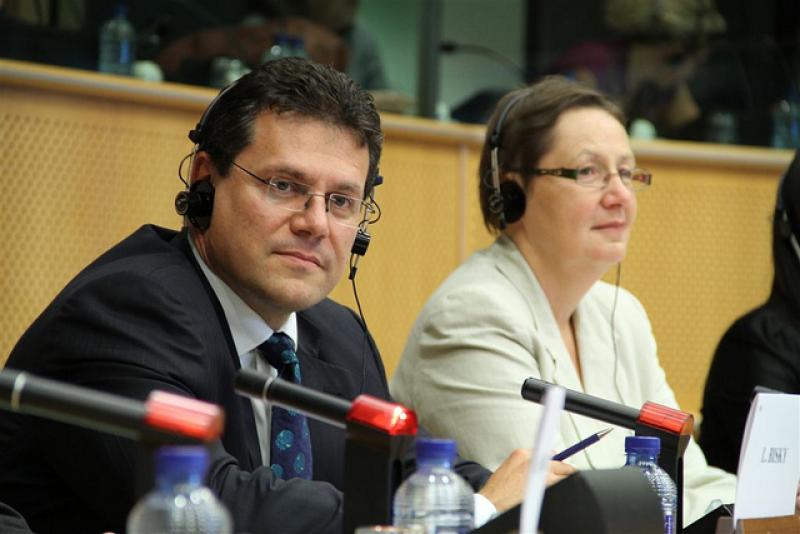 Time for Commissioner Šefčovič to get tough on secretive lobbying lawyers

European Commissioner Maroš Šefčovič made some remarkable statements in a hearing in the European Parliament last week. In response to questions from MEPs about the ongoing review of the EU’s voluntary Transparency Register for lobbyists, Mr Šefčovič expressed concern about the growing presence of US law firms in Brussels, who are expanding their lobbying presence as a result of the EU-US trade negotiations (also known as TTIP) that were launched this summer.

In October, the New York Times published an in-depth article on the Brussels lobbying of US law firms such as Covington & Burling, Hogan Lovells and Baker Botts. The article describes how these firms are lobbying on behalf of large US-based multinationals to weaken EU environment and health standards, and how they have hired several former Commission officials  while refusing to join the EU’s voluntary lobby register. These law firms see the EU-US trade talks, which aim to ‘harmonise’ regulatory systems on both sides of the Atlantic, as “a potential business bonanza” that will create “a huge wave of lucrative lobbying and legal work”, the New York Times reported. The article correctly points out that the law firms are taking advantage of weak transparency and ethics rules in Brussels. Šefčovič told the New York Times that he was “considering writing a letter to the law firms that are ignoring the register”, to push them to comply. Six weeks later he told MEPs that he would contact the US law firms to ask why they are not registered in Brussels when they are signed up to the US lobby register. But isn’t it time for some more determined action?

In the US, the refusal of law firms to sign up to a voluntary lobby transparency register sparked the decision to move to a mandatory lobby transparency register in the mid-1990s. After more than five years of voluntary lobby disclosure in the EU, most law firms involved in lobbying stay out of the register. The time for friendly letters to law firms should be over by now, and the  EU should follow the lessons learned in the US. Moving to mandatory lobbying disclosure would be the only logical outcome of the current review of the register. Establishing a mandatory register will take time, but in the meantime there are a number of easy steps the Commission can take to raise the costs of not being in the EU Transparency Register. For example, why is Šefčovič not instructing Commission officials to make life harder for law firms involved in lobbying which are boycotting the Transparency Register, by refusing meetings with lobbyists representing these law firms and not accepting speaking invitations from unregistered firms?

An example is the “EU briefing on TTIP” for members of Amcham, the lobby group of US multinationals in Europe, that takes place tomorrow morning (10 December), sponsored and hosted by Clearly Gottlieb at their Brussels office. Among the speakers are Denis Redonnet, announced as the European Commission’s “chief communicator on the TTIP”. Gottlieb is a US law firm with major lobbying operations in Washington DC; its turnover from lobbying for industry clients was US$2,290,000 in the peak year of 2009. This year the firm has reported lobby earnings of US$510,000 so far in the mandatory US register, with Citigroup and the Institute of International Bankers as its biggest clients. Gottlieb’s Brussels office is not in the EU’s Transparency Register, so it does not disclose the size of its lobbying activities in Brussels and who it is lobbying for. But tomorrow’s event is clearly an activity that falls under the register’s definition of lobbying. Sending a high-level Commission official to speak at an event of an unregistered US law firm involved in lobbying gives completely the wrong signal.

I am very concerned at the secrecy and lack of transparency associated with the upcoming transatlantic trade deal, our MEP's are failing in their elected duty to inform us correctly, there is also a perception that the public's best interests are not necessarily the primary goal of our MEP's.
Take Ireland for example, to be fair this little country has practically saved the Euro common currency through it's controversial guarantee of ALL investment bonds and capital within the state banking sector. The ECB/Troika and other international financial institutions forced Ireland to imposed harsh and severe systems of austerity and cuts coupled with a blatant privatisation agenda within the nation state of Ireland. Ireland took the blows and is still taking them and it is completely unsustainable.

How is the eurozone acknowledging and attempting to improve or better the situation you might ask, I mean, after all we are a community right? a community where the ethos or primary objective is mutual assistance and sharing of burdens within a strong Union, right?

Well this community ethos is becoming clearer and clearer as the months and years roll on, what I am seeing as an EU citizen since 1973 is a slow and insidious slide towards the breaking up of the nation state, the corporitisation of our laws and a privatisation agenda unparallelled in history. I see marginalisation and exclusion, secret deals being concocted by inside entities and pushed by outside entities, attempting to erode and circumvent our hard won regulations, rights and laws through what are being termed 'harmonisation' processes (it's the innocence of the language which is even more sinister)

This is a disgrace and people are getting tired of non-representation and corporate lobbying, fat-cat salaries, top-ups, incredibly generous pensions and corporate jobs when their 'sparkling' EU careers come to an end.

I heard the phrase 'enlargement fatigue' used on a euro-news channel the other day and although a media buzz word, it does ring through for many Europeans that I know, from the earliest membership countries, we are been forgotten now as there are fresher pastures to plunder in the east, new forms of privatisation and corporatisation and hollowing out of states just joined, all in the name of 'going forward'?? There is bullying too, I read recently where Serbia is being denied access to common markets because the country refuses to employ genetically modified organism technologies because the people do not feel they are safe, but the WHO (World Health Organisation) punish democratic decisions. Similar stories from Bulgaria and Romania where bio-tech firms are abusing these poorer less developed countries by pushing their bio-tech products/practices.

It is becoming clearer that a three tier European community is emerging where politicians, eurocrats, corporate and banking 'elites' and those who cleave to them are enjoying a great life while the struggling middle service providers manufacturers and workers are being squeezed continually and then there are those, the majorityyouth, already dispossessed politically and financially, jobless, in debt, trapped in a viscous circle of poverty while social improvement and education schemes have their funding withdrawn and services across the EU are insidiously privatised; childcare, healthcare, care of our elderly, our water, our natural resourses, our food production the list goes on and on.
Don't push too far or the mechanism will snap and pulverise on the rebound.