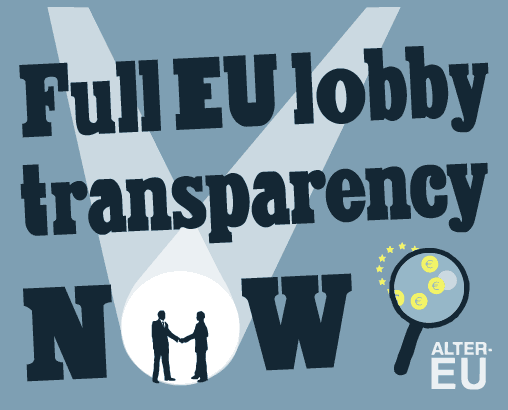 Last Friday, the EU's Annual Report on the Transparency Register was published, with a jubilant press release which reported that the number of registrants had grown by 10 per cent during the past year. The report does not assess who these new registrants are and whether they are major players in lobbying, but the fact remains that hundreds of companies and lobby groups actively lobbying to influence EU decision-making, continue to boycott the register. The self-congratulatory tone of the EU's report is therefore rather awkward.

Five months on from the publication of ALTER-EU's report 'Rescue the Register' which identified hundreds of organisations lobbying in Brussels but who were missing from the EU Transparency Register, the situation has only very marginally improved.

As of 28 November 2013, of the 54 EU lobby firms identified as missing from the EU Transparency Register in June, some are no longer active or supplying lobbying services, but none have since registered. The total number on the list of unregistered lobby firms is now 46 and this is likely to be a non-exhaustive list.

As of 28 November, of the more than 100 unregistered companies identified in June as lobbying the EU institutions (either they were listed in a directory of corporate EU affairs offices and / or they were on a list of participants in EU stakeholder consultations, again a non-exhaustive list), seven are now included in the register, but that leaves over 90 from the original list who remain outside the register. These absentees include major corporations such as: ABN-Amro bank, Amazon, Delhaize, Goldman Sachs, Janssen Pharmaceutica and Time Warner. Again, this list is likely to be non-exhaustive.

The annual report mentions that the register secretariat has contacted unregistered lobby groups inviting them to “consider registering”. This approach is clearly insufficient, because the voluntary character of the register allows lobbies to simply ignore the “invitation”.

The annual report on the register only just avoids ignoring what is perhaps the most important issue of all: the ongoing and virtually complete boycott by law firms that lobby for corporate clients. The report acknowledges that there has been “little or no evolution compared with 2012”, but does not mention just how problematic this is.

An in-depth article in the New York Times this autumn exposed how Covington & Burling and a dozen other major international law firms have opened lobby offices in the Brussels EU quarter, taking advantage of the voluntary nature of the lobby register to covertly lobby for weaker EU environment and consumer protection. The credibility of the EU's lobby register is at stake unless the law firms are forced to register.

In ALTER-EU's report in June, the serious problems that exist with the quality of the data in the register was highlighted. ALTER-EU reported that the top-three biggest spenders on EU lobbying, according to the data in the register, were all small players that had reported wrong data. The annual report mentions that more is now being done in terms of quality checks on the registrations. An updated ranking of the biggest spenders in the register shows that quality checks have helped a bit: two of the three have corrected their figures. But the top 10 also shows that much more is needed. The biggest spender, according to the register, is Tuncluer Textile industry, an Istanbul-based producer of organic baby clothes. Number five in the ranking is CEMAFROID, a small French consultancy, which reports spending over €5 million on lobbying (the firm's annual turnover in 2011 was €4.5 million).

In the next ten days, a small group of MEPs together with Commissioner Maroš Šefčovič will complete their review of the EU lobby register and make recommendations for changes to the current register. By all accounts, negotiations are finely poised and the group is split on whether or not to opt for a timetable to introduce a mandatory lobby register.

For anyone who supports more transparency and accountability in lobbying and policy-making in Brussels, abandoning the voluntary approach is a no-brainer. Civil society has a right to know who is trying to gain influence on EU politics, with what budget, on which issues and on whose behalf. This situation will only come about through the transition to a register with which all lobbyists targeting the EU institutions have to comply.

On 12 December, the working group on the lobby register will make their final decisions. Will they opt for business as usual, or secure the right to know about the role of lobbying in EU decision-making with a timetable for a mandatory lobby register?