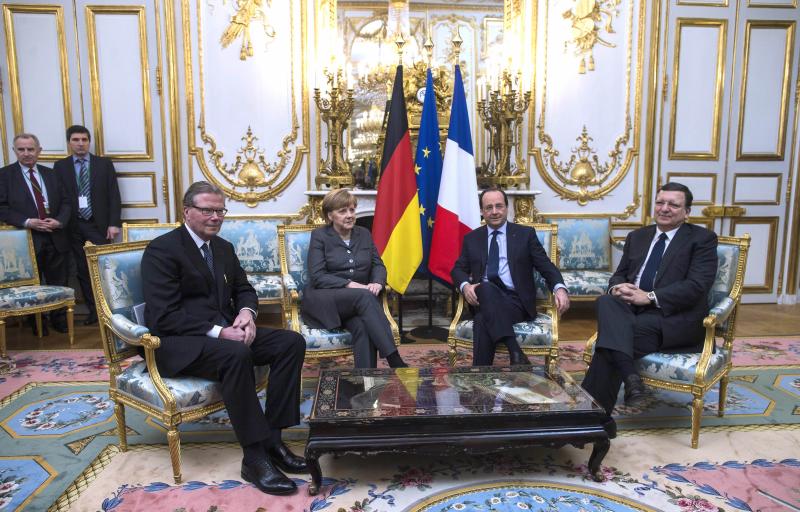 The “Permanent Liaison”: how ERT and BusinessEurope set the agenda for the EU Summit

The issue of 'competitiveness' will be dominating the discussions at the European Council Summit that takes place on 20-21 March. An important theme for big business as measures in this field are, while attacking citizen's rights, generally in line with industry's interests. Therefore, in the past months, major industry lobby groups ERT and BusinessEurope have been bent on exerting their influence on the agenda and discussions of first the Competitiveness Council meeting and then the EU Summit – and seem to have succeeded.

The spring summit of the European Council on 20-21 March will bring together the heads of state of EU countries, the Council's President and the President of the European Commission. The main topic of discussion will be how to increase 'competitiveness', a term that has become a buzzword in the EU in the last few years. Not only is boosting 'competitiveness' generally in favour of big business; the agendas of both the Summit and the Competitiveness Council that preceded it broadly seem to have been set by recent exclusive and high level meetings between industry groups European Roundtable of Industrialists and BusinessEurope, and EU leaders and institutions.

Though the term 'competitiveness' can take many different shapes, measures taken to boost it are usually music to the ears of big business, so they have every reason to try and be in the front seat in discussions on this issue. However, their interests hardly ever match those of citizens. Typically, in order to increase 'competitiveness', measures need to be taken that tend to reduce labour rights, lower wages, attack social rights and decrease targets for tackling climate change, to give just a few examples. Business' privileged seat at the EU's table where it is allowed to both frame and dominate the terms of this debate is therefore alarming, and moreover poses a threat to democratic values.

So how has industry influence played out with regards to the agenda of the upcoming European Council Summit, and that of the Competitiveness Council that preceded it?

On the 19th of February, after an afternoon of talks between Chancellor Merkel and President Hollande in Paris, European Commission President Barroso joined these two for a private meeting with the European Roundtable of Industrialists (ERT) – one of Europe's most influential industry lobby groups.

ERT is an association of more than 50 business leaders of multinational companies (such as Ericsson, L'Oréal, Nestlé, Volvo, Bayer, Heineken, and many more) with a European base; membership is at personal invitation only. Established in the 1980s, ERT has sought to shape the European integration process according to corporate wishes by focusing on the major overall strategies for the development of the European Union, rather than lobbying on specific, 'petty' legislation.

The ERT's influence in shaping these big European projects has been facilitated by its privileged access to high-level discussions, evidenced by its meetings with Merkel, Hollande, and Barroso which are now an annual event. The agenda of their most recent meeting on the 19th of February included industrial policy, energy and climate, trade policy, and labour policy, as set out in Barroso's press statement. The meeting provided an excellent opportunity for industry to prepare the ground for their priorities to dominate in the upcoming European Council Summit, as three out of four of these topics will also be discussed there on 20-21 March, according to the Council's summit agenda:

“The European Council will underline the importance of a strong and competitive European industrial base as a driver for economic growth and jobs. Building on the Commission's recent Communication, it will highlight some of the key issues to be addressed, such as the cost of energy in industrial production, the skills mismatch, infrastructure development, patenting, global value chains, smart specialisation and KETs.”

It goes on to state that:

“The European Council will hold a first policy debate on the basis of the Commission Communication on a framework for climate and energy in the period from 2020 to 2030.”

It can hardly be called a coincidence that one day after the meeting between the ERT, Merkel, Hollande and Barroso, the Competitiveness Council – one of the ten Council configurations that deals with the internal market, industry and research – met to talk among other things about priority actions to improve industrial competitiveness in Europe over the next five years, “considering that industrial competitiveness is likely to figure prominently on the agenda of the Spring European Council on 20 and 21 March”.

The outcomes of this meeting related to industrial competitiveness are very much in line with the wish list expressed by Leif Johansson, Chairman of ERT, in a press statement before his talk with Merkel, Hollande and Barroso. Johansson says that the EU should renew “its political determination to complete the Single Market”, with a particular focus on “establishing a genuine Single Market in the energy and ICT sectors”. In addition, he is looking for policies that “address Europe's high energy costs which put increasing competitive pressure on the region”. Accordingly, the Competitiveness Council meeting stated that, “Energy prices and the need for a single energy market were highlighted as important elements affecting industrial competitiveness”, and “the development of a digital single market” was also mentioned.

Furthermore, Johansson stresses that “EU leaders need to ensure effective coordination and alignment of EU and national policies”. The Competitiveness Council echoed “the importance of coordinating different European policies”, as well as “the need for a harmonised approach to industrial challenges”.

Johansson also demands: “Any climate or energy policy must be adapted to ensure that the goal to increase industry's share of EU GDP to 20% by 2020 is respected”; ministers in the Competitiveness Council seem to be steering in the same direction, emphasizing “the need for a more balanced approach between the EU's industrial, energy and climate policies”. This line of thinking is alarming, because 'balancing' industry and climate policies basically means that targets on climate change will be watered down.

Another leading industry player that has enjoyed privileged access to the European institutions for many years, and that seems to have had influence on the Summit's agenda, is BusinessEurope, a lobby group that represents industry federations from 35 different countries. On its website, BusinessEurope states that it is “the leading advocate for growth and competitiveness at European level, standing up for companies across the continent and actively campaigning on the issues that most impact their performance”. It states that its fundamental aims have not changed since the establishment of the group more than fifty years ago:

The achievement of an essentially “permanent liaison” with the highest level of European officials might be considered one of their most formidable successes.

BusinessEurope events have impressive guest lists that, as well as business representatives, also include many high-level officials from national and European institutions. Their BusinessEurope Day at the end of January was no exception; the group presented a blueprint for industrial competitiveness, called 'Industry Matters' consisting of seven recommendation points on energy/climate, the Single Market, innovation, infrastructure, access to finance, labour policy and education. The list of speakers included Commission President Barroso, Parliament President Schulz, the Greek Prime Minister and representative of the Hellenic Presidency of the Council Samaras, Commissioner for Trade De Gucht and Commissioner for Energy Oettinger.

Barroso's speech at the BusinessEurope Day could hardly have been more explicit, as he effusively thanked the industry lobby group for the policy recommendations served up in their 'Industry Matters' blueprint, argued for further economic reform (by completing the Banking Union and strengthening the European Semester) and constantly reassured industry of its importance with declarations such as: “[T]his proves your point, that industry matters and that industry is extremely important for the rebirth or the renaissance of our economy”, and, “we need to keep and to reinforce our full attention to industry”.

Barroso's speech also referred to the agenda of the upcoming European Council Summit on 20-21 March, at which issues “like the ones we have been discussing here [at BusinessEurope Day]: competitiveness, growth, energy, climate matters and also what we can do to increase our competitiveness in Europe” will be priorities. The Commission President continued, “the event today, and also your recommendations, are perfectly timed to be part of this debate, and I congratulate you for that.” A BusinessEurope event less than two months before a European Council Summit where the very same issues are discussed, involving the same participants (e.g. Barroso, Samaras), and the agenda of which is drafted in close cooperation with those participants; perfect timing indeed.

At the end of his speech, Barroso concludes that BusinessEurope's 'Industry Matters' recommendations “are very much in line with our preoccupations”, and invites the group to play a key role in increasing competitiveness; “what we need now, and for that you have a key role to play with the European institutions and with the national governments, is to focus on delivery, on implementation, so that we can have a stronger industry for a stronger Europe” – an invitation that must have been cheerfully welcomed by BusinessEurope.

In addition to the – in BusinessEurope's own words – “permanent liaison” the group seems to have with the Commission's President, privileged access is also granted with the ranks of the Council of the EU. Last November, Markus Beyrer, Director General of BusinessEurope, was invited to speak at a meeting of the Council's Working Party on Competitiveness and Growth.

The Council's working groups and committees play a vital role in the decision-making process of the Council configurations. This is a three-stage procedure that requires every proposal from the Commission – to create new legislation or adapt an existing law – to pass through the relevant working party, before it goes to Coreper (Committee of Permanent Representatives of member states) and finally to the Council configuration. With regard to this case, it means that every Commission text firstly goes to the Working Party on Competitiveness and Growth before it reaches the Competitiveness Council; this makes the Working Party a perfect place for exerting influence at an early stage. The involvement of BusinessEurope in this powerful group is therefore provocative, to say the least.

Again, the topic of BusinessEurope's intervention at the Council's Working Party meeting is strikingly similar to one of the agenda points of the upcoming European Council Summit (the discussions of which are fed by contributions of the Competitiveness Council). In its intervention BusinessEurope complains that the implementation of measures by member states following from the Country Specific Recommendations in the European Semester – broadly, business-friendly and neoliberal reforms of national economies mandated from Brussels – are not happening at a sufficiently fast pace. Evaluation of the European Semester will duly be an agenda point for the European Council Summit on 20-21 March.

After ERT's and BusinessEurope's successful attempts to set the agenda of first the Competitiveness Council and then the European Council Summit itself on 20-21 March, and prepare the ground for the discussion of the key points, it remains to be seen whether the outcomes of the Summit will also match their corporate wish list. In the meantime, while European leaders, the Commission's President and ERT and BusinessEurope are celebrating a cosy consensus, one can only imagine what the damaging consequences – on democracy, on social rights, and on climate policies to name just a few potential victims – of this “permanent liaison” will be.